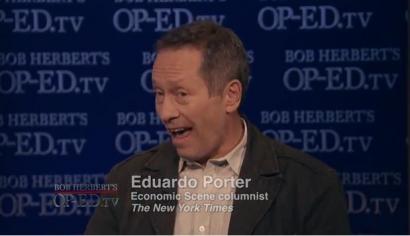 Eduardo Porter, economics reporter for the New York Times, equated the United States’ lack of his preferred European-style levels of “safety net” taxes and welfare spending to racism in his Sunday Review piece: “Why America Will Never Get Medicare for All.” It’s adapted from his new book American Poison: How Racist Hostility Destroyed Our Promise.

So far, the debate around [a robust expansion of government programs] has focused on the fiscal and political obstacles (Mitch McConnell, ahem). But there’s a bigger problem. Americans have repeatedly rejected expansions of the social safety net because it inevitably collides with one of the most powerful forces shaping the American experience: uncompromising racism.

The United States alone has crumpled because it showed no interest in building the safeguards erected in other advanced countries to protect those on the wrong side of these changes. Why? Because we couldn’t be moved to build a safety net that cut across our divisions of ethnicity and race.

The paranoid left-wing screed from an ostensible economics reporter continued.

Medicare and Medicaid, which became law in 1965, were the last major programs inspired by the New Deal. Since then, America has turned against welfare in favor of another, different tool of social management: prison.....By the 1980s, Ronald Reagan was slashing government spending and asserting that taxpayers were being defrauded by undeserving black “welfare queens.”

Porter even went after Bill Clinton for welfare reform, then got back on the prison hobby-horse.

The demographic determinism is problematic. Do we have to wait until the 2040s, or longer, to get the sort of country that cares for everybody?

....While minorities might eventually reshape American politics into something more inclusive, until that happens politics will be determined by the efforts of freaked-out whites to resist this change. Republicans’ efforts to ensure a conservative majority on the Supreme Court for a generation, like state-level efforts to suppress the vote of people of color and gerrymander districts to dilute their electoral clout, are a clear expression of white fear.

Perhaps part of the reason why we’re the richest nation is that we don’t have government-run health care?

Porter made the same argument in November 2017, wailing:

It is hard to understand the deep reasons behind the American aversion to taxes and government. Is it the vestigial expression of a rugged individualism born on the American frontier? Is it racial hostility -- an unwillingness by whites to fund social programs that some believe unduly benefit minorities?