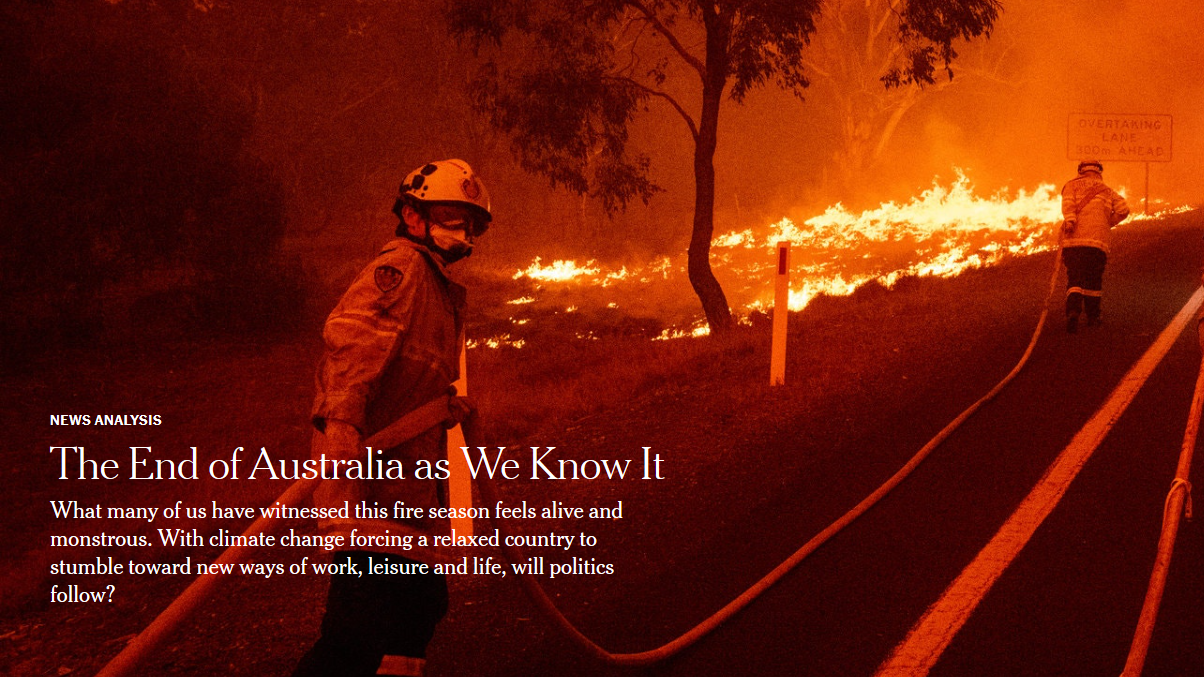 The front of Sunday’s New York Times featured yet another wildfire-spread climate lecture from Australia bureau chief Damien Cave. Debate is over! A lifestyle revolution must begin immediately.

This alarmism was labeled a “Reporter’s Notebook,” but Cave wasn't reporting but pleading with his unfortunate subjects to radically reorganize their lives in the name of “climate change.” The online headline deck: “The End of Australia as We Know It -- What many of us have witnessed this fire season feels alive and monstrous. With climate change forcing a relaxed country to stumble toward new ways of work, leisure and life, will politics follow?”

In a country where there has always been more space than people, where the land and wildlife are cherished like a Picasso, nature is closing in. Fueled by climate change and the world’s refusal to address it, the fires that have burned across Australia are not just destroying lives, or turning forests as large as nations into ashen moonscapes.

They are also forcing Australians to imagine an entirely new way of life. When summer is feared. When air filters hum in homes that are bunkers, with kids kept indoors. When birdsong and the rustle of marsupials in the bush give way to an eerie, smoky silence.

“I am standing here a traveler from a new reality, a burning Australia,” Lynette Wallworth, an Australian filmmaker, told a crowd of international executives and politicians in Davos, Switzerland, last month. “What was feared and what was warned is no longer in our future, a topic for debate — it is here.”

“We have seen,” she added, “the unfolding wings of climate change.”

Like the fires, it’s a metaphor that lingers. What many of us have witnessed this fire season does feel alive, like a monstrous gathering force threatening to devour what we hold most dear on a continent that will grow only hotter, drier and more flammable as global temperatures rise.

....The conservative government is still playing down the role of climate change, despite polls showing public anger hitting feverish levels. And yet what’s emerging alongside public protest may prove more potent.

Cave met Bob Gallagher, who felt the criticism of Prime Minister Scott Morrison was unfair. Luckily “reporter” Cave was there to set him straight and Gallagher didn't even "interrupt"!

I asked him to imagine a version of Ms. Wallworth’s dream -- an Australia with a prime minister who shouted to the world: “What we all love, this unique country, is being destroyed by inaction. We’ll punch above our weight, but we can’t do it alone. We need your help.”

Mr. Gallagher listened without interrupting. “I hadn’t thought of that,” he said. “I could support that.”

That snobbish attitude of enlightening the peasantry was also present in Cave’s January 23 piece lambasting a conservative politician, “As Australia Faces a Fire Crisis, a Climate-Change Denier Rallies the Troops.”

Throughout Australia’s devastating fire season, one Facebook page has rallied an angry public like no other, with more shares and comments than anything coming from the prime minister or the country’s largest environmental groups.

That page belongs to Craig Kelly -- a former furniture salesman who has spent a decade in Parliament setting himself up as the climate-change denier in chief.

As the country fears it is being condemned to a fiery future by heat and drought, Mr. Kelly has been gathering and goading a right-wing tribe under the banner of posts that shout in all caps....

But with posts and comments on his Facebook page that cherry-pick data and encourage violence against environmentalists, he has emerged as the public face of a parallel universe -- the potent force that helps keep the government, despite the wishes of a broad majority of Australians, from taking stronger action on climate change.

"Actions" that would include wrecking the country's mining industry. This is what Cave calls "deep emotional connections" in journalism.