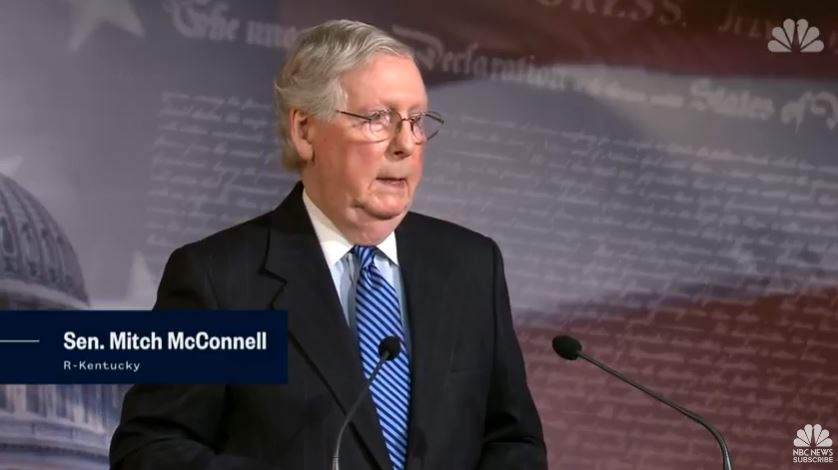 In the wake of the failed impeachment of Donald Trump, the New York Times’ Elaina Plott took a 2,000-word front-page look Saturday at how Senate Majority Leader Mitch McConnell has elevated his reputation in the eyes of Republican voters in “A New Image Of McConnell In G.O.P. Eyes.”

When Mr. McConnell, the majority leader and Kentucky’s senior senator, secured President Trump’s acquittal on Wednesday, he took to the Senate floor to extol the end of “this precedent-breaking impeachment.” It was a final bow of sorts, the capstone of a yearslong metamorphosis from establishment bore to conservative icon.

Plott’s tone was mild, but her word choice harsh, using a form of "ruthless" three times to describe McConnell.

....Perhaps less obvious, though, is the extent to which Mr. McConnell owes much of his new viability to Mr. Trump -- how his brand of staid ruthlessness has thrived as a counterweight to the brash, whim-driven style of the president.

All of the things that once repelled many conservatives about Mr. McConnell have now become the foundations of his appeal. According to the Kentucky women, no longer is the 77-year-old lawmaker past his prime -- he is “battle tested.” His likeness -- white, wrinkled, expressionless with a dash of smirk -- is not the aesthetic of a has-been; it is the portrait of “stability."....

Perhaps no leader in recent memory has haunted the Republican Party quite like Mr. Reid, the Senate majority leader from 2007 to 2015. Here was a man who appeared to heed Mr. Obama’s call during the 2008 election, when he reminded supporters of “the Chicago way,” as immortalized by Jimmy Malone in “The Untouchables”: “If they bring a knife to the fight, we bring a gun.”

The irony, of course, is that Mr. Reid’s image as a craven conductor was in many ways the product of Mr. McConnell himself, whose relentless use of the filibuster often meant that Mr. Reid had to rely on party-line governance. But it was as if Republicans, in fixating on their opponents, had failed to acknowledge that the ruthlessness they craved in their leaders was already well at work.

In her rush to turn the tables, Plott skipped Reid’s partisan smears, like the despicable lie he made on the Senate floor that presidential candidate Mitt Romney didn't pay his taxes.

....Yet it is precisely this aura -- call it ruthlessness, or shamelessness -- that has found purchase among conservatives, particularly young ones. Indeed, when a party’s watchwords are increasingly to “own the libs,” grounded in a cold tally of victories over any discernible ideological framework, it is no wonder Republicans have found their fighter in Mr. McConnell.

One partisan politician who has never been termed “ruthless” in a Times news story, according to a nytimes.com search? Harry Reid.