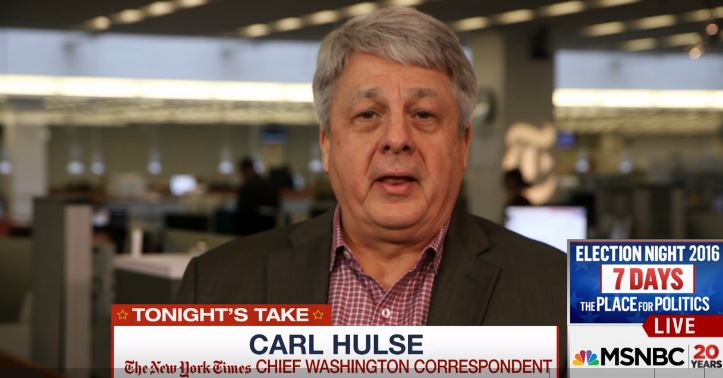 The infamously Democrat-friendly New York Times congressional reporter Carl Hulse visited retired Sen. Harry Reid for a friendly debriefing. Hulse let the deeply partisan Reid conveniently lay in against his former Republican colleagues and President Trump, with no opposition, on the front of the National section: “Senator’s Farewell: ‘I Just Shake My Head.'”

....Mr. Reid, who couldn’t get enough of the Senate floor during nearly two decades in the Democratic leadership, doesn’t need to follow the Senate obsessively to be certain that he doesn’t like what’s going on in Washington these days.

“I just shake my head is all I can do,” said Mr. Reid, who has been spending most of his time in Las Vegas. “I feel sad,” he said, grappling to describe his sentiments, particularly about what he sees as a Republican refusal to directly challenge President Trump on an array of troubling subjects.

To some, that is no doubt good news. Mr. Reid was a tough adversary, an acerbic foe always ready to slug it out with Republicans, and he left behind many detractors when he retired at the end of 2016.

To get a last bit of that old-home feel, Mr. Reid organized a luncheon on Thursday for about a dozen of his fellow former colleagues, at the MGM National Harbor casino resort outside the capital. It was a who’s who of former Senate Democrats, including Tom Daschle, Christopher J. Dodd, Blanche Lincoln, Mary Landrieu, Robert Torricelli, Ben Nelson, Joseph I. Lieberman, Paul Sarbanes, Ken Salazar, Max Baucus, Mark Pryor and Russ Feingold.

In his final years in the Senate, Mr. Reid had to cope with the consequences of a terrible accident at the start of 2015, when exercising with a resistance band in his home. He suffered multiple serious injuries and lost sight in his right eye. As he tried to recover and simultaneously run the Senate for two challenging years, Mr. Reid at times struggled physically. But his time away from Washington has reaped benefits and he appears much more fit and steady on his feet.

But this week, he reserved some of the strongest criticism for his former Republican colleagues led by Senator Mitch McConnell of Kentucky. He noted that they remain largely mum as the president’s conduct is under wide-ranging scrutiny, including his possible relationship with a pornographic film actress, the special counsel’s inquiry into Russian meddling in the 2016 election and the surrounding turmoil in the administration....

Instead of fawning, Hulse could have used the opportunity to look back at Reid’s record, including the highly partisan Democrat’s greatest personal insults and despicable lies about Republicans, as when he said on the Senate floor in August 2012, that then-Republican presidential candidate Mitt Romney didn't pay his taxes.

"So the word is out that he has not paid any taxes for 10 years. Let him prove he has paid taxes, because he has not."

When challenged about the slander, Reid crowed to CNN in 2015, "They can call it whatever they want. Romney didn't win did he?"