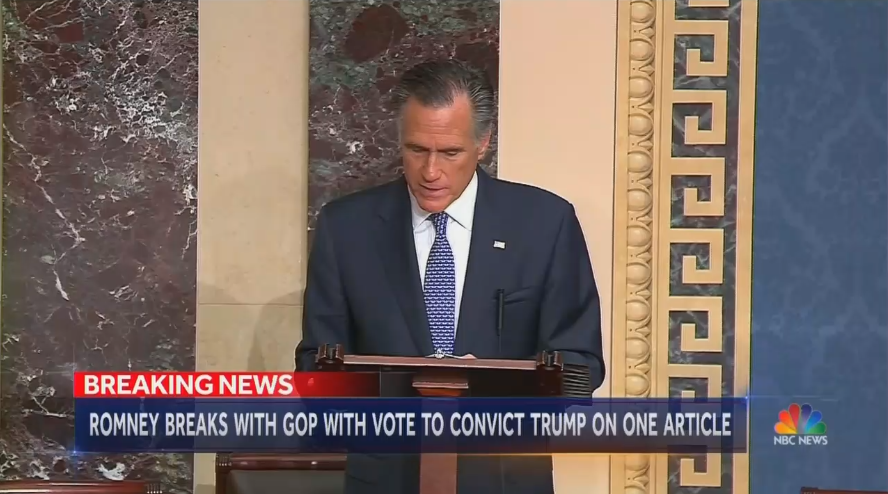 Sen. Mitt Romney was the sole Republican to vote to impeach Donald Trump, and the New York Times front page on Thursday demonstrated its strange new respect for the Utah Republican -- the same candidate it spent 2012 vilifying for standing between Barack Obama and a second term -- in Mark Leibovich’s “An Act of Defiance Against a Party He’d Personified.” A text box on the jump page cast Romney as making a brave stand: “Recognizing that breaking ranks may bring ‘unimaginable’ consequences.”

NewsBusters’ Tim Graham recently reminded us how Leibovich gleefully went along with Obama’s smear tactics against Romney in 2012.

Senator Mitt Romney of Utah never became president, but he earned a new distinction on Wednesday: He will be remembered as the first senator in American history to vote to remove a president of his own party from office.

Mr. Romney, the 2012 Republican nominee for president, said he expected swift and extreme recrimination from his party for his solitary act of defiance. He was not incorrect.

“Attempting to corrupt an election to maintain power is about as egregious an assault on the Constitution as can be made,” Mr. Romney said in an interview in his Senate office on Wednesday morning, ahead of the vote and an afternoon floor speech in which he choked up as he explained his decision.

With a single vote, Mitt Romney has become a profile in courage to the Times, which spent 2012 smearing him as racist and mocking his Mormon faith.

His vote cast into relief the rapid evolution of the Republican Party into an entity that has wholly succumbed to the vise grip of Mr. Trump....

On the Senate floor on Wednesday, Mr. Romney placed his decision in the context of his faith, his family and how history would remember it.

It was a cathartic moment for Democratic senators.

As Mr. Romney revealed on the Senate floor how he would cast his votes, Senator Brian Schatz, Democrat of Hawaii, dabbed at his eyes.

The Times followed up with “Impeachment  Briefing: Trump Is Acquitted” by Noah Weiland, who spoke to Leibovich about his article. Leibovich gushed:

[Romney] said he woke up before 4 a.m. every day and did a lot of agonizing. He read a lot: the Constitution, the Federalist Papers, a lot of political biographies. He took this very seriously. It’s an easy thing for a politician to say, but I actually believed him....He is as lonely a voice inside the G.O.P. as there is right now in the Senate. It takes different forms, like being heckled in grocery stores, which happened to him in Florida over the weekend....He said he was willing to do this for the privilege of voting his conscience.