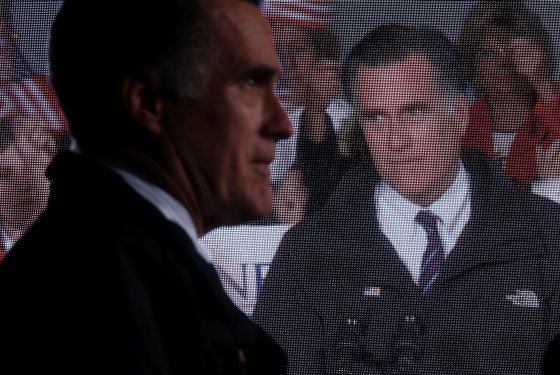 Mitt Romney’s vote to convict President Donald Trump on the impeachment charge of abuse of power won him a bunch of new fans amongst the liberal press. CNN’s Jim Acosta and John Avlon swooned over the Utah Senator’s “Profile in Courage” in standing up against Trump and his fellow Republicans.

This is a far cry from the treatment Romney received when he was the GOP presidential nominee looking to take down their hero Barack Obama in 2012. Back then Romney was cursed as a “man who does not have a soul” and “a robot who will do whatever it takes, whatever he’s told to do, to make it to the White House.”

The Washington Post’s Jason Horowitz dedicated a 5,400 word expose to how Romney might have pinned down a boy to cut his hair in 1965. The New York Times’ columnist Gail Collins dogged Romney with over 50 columns that mentioned he once strapped the family dog to the roof his car. Ex-Newsweek editor Jonathan Alter even posited that if Romney won and dismantled ObamaCare it would mean “a lot of people will die.”

Brace for the whiplash: The following is a compilation of current praise for Romney’s vote against Trump, followed by some of the worst of the anti-Romney hate back in 2012:

“One of the things that Mitt Romney did today besides showing to many Americans that this was a profile in courage and there is room for mavericks here in Washington, he did rob Republicans, did rob the President of a key talking point they have been saying all along that it was a partisan impeachment exercise. That is obviously no longer the case, given what Mitt Romney did today, Wolf.”
— Correspondent Jim Acosta on CNN’s The Situation Room with Wolf Blitzer, February 5.

“That was a true profile in courage speech we just heard. That was the sound of a man who had wrestled with his conscience, who tried to think bigger than partisan politics, and ultimately kept faith with his oath, his promise to God....This was a brave, courageous speech. He will catch hell from the right as he predicted, but that will be looked on well in the eyes of history....One man with courage can make a majority....In the pure passion and moral clarity from which he spoke, Mitt Romney will gain a lot more supporters he didn’t know were there, as well as the detractors he fully expects beginning with the audience of one in the Oval Office....Mitt Romney took a decisive step forward. That was a profile in courage in the classic JFK sense, standing up for what you believe is right, against the pressures of your party.”
— CNN senior political analyst John Avlon on CNN Newsroom with Brooke Baldwin, February 5.

“Mitt Romney, of course, the former Republican nominee. In the moment, as he was speaking, it felt historic, indeed. It will cement Senator Romney’s legacy and stain what the White House was no doubt hoping a clean party line acquittal today.”
— Host Brian Williams on MSNBC’s live impeachment coverage, February 5.

“This was a moment that people who have known Mitt Romney for a long time have thought that he was capable of and not always seen. Right? Nobody’s won big money betting on Mitt Romney to take big, bold, public stands away from his own political self interest. That’s not something that he’s done throughout the course of the career but as long as I have known him and covered him and known his family, the thought is that he is a good, decent people deep down inside and I thought from the minute that the Senators took the oath that swearing an oath before God for Mitt Romney is like unlocking his superpower.”
— Correspondent Garrett Haake on MSNBC’s live impeachment coverage, February 5.

Praise for the “President of the Republican Resistance”

“The Mitt Romney decision is a fascinating one for this reason: He is now the president of the Republican resistance to Donald Trump. Right now he stands alone.”
— NBC’s Meet the Press moderator Chuck Todd on NBC Nightly News, February 5.

...BUT HATED MITT THEN

If Romney Wins, Many Will Die

“Mitt Romney doesn’t see dead people. But that’s only because he doesn’t want to see them; if he did, he’d have to acknowledge the ugly reality of what will happen if he and Paul Ryan get their way on health care....A literal description of their plan is that they want to expose many Americans to financial insecurity, and let some of them die, so that a handful of already wealthy people can have a higher after-tax income.”
— New York Times columnist Paul Krugman, October 15, 2012.

“Repeal equals death. People will die in the United States if ObamaCare is repealed. That is not an exaggeration. That is not crying fire. It’s a simple fact….They [the Obama campaign] need to move on to a debate about the main issue, which is ObamaCare. And they can bring death into the conversation and say, ‘No, we’re not calling Mitt Romney a murderer. What we are saying is that if he’s elected President, a lot of people will die.’”
— Ex-Newsweek senior editor Jonathan Alter, now an MSNBC political analyst, on The Ed Show, August 9, 2012.

“This is the kind of man that Mitt Romney is. This man does not have a soul. If you opened up, you know, his chest, there’s probably a gold ticking watch in there and not even a heart. This is not a person. This is just a robot who will do whatever it takes, whatever he’s told to do, to make it to the White House. And he will take whatever push in the back from whatever nasty person is pushing him and move him further in that direction.”
— New York Times columnist Charles Blow on MSNBC’s The Last Word, July 17, 2012.

“In his decision to make Paul Ryan, the zombie-eyed granny-starver from Wisconsin, his running mate, Romney finally surrendered the tattered remnants of his soul not only to the extreme base of his party, but also to extremist economic policies, and to an extremist view of the country he seeks to lead.”
— Esquire’s Charles Pierce, a former Boston Globe Magazine writer, in an August 11, 2012 posting, “Paul Ryan: Murderer of Opportunity, Political Coward, Candidate for Vice President of the United States.”

“Tonight on World News, campaign curve ball. Mitt Romney’s high school classmates accuse him of bullying a vulnerable student. How does the candidate respond tonight?...Good evening. As we begin, there is a surprising turn of events on the campaign trail. Presidential candidate Mitt Romney, accused of bullying a very vulnerable fellow student when he was in high school.”
— Anchor Diane Sawyer leading off ABC’s World News, May 10, 2012.

“Look, Anderson, it was very unfortunate for Governor Romney, because it sort of raises this question: Can he relate to working women? You know, it made it sound almost like working women are some mail-order product you can order out of colored binders.”
— CNN correspondent Jessica Yellin on Anderson Cooper 360, October 17, 2012 talking about Romney’s statement about recruiting women in Massachusetts: “I went to a number of women’s groups and said, “‘Can you help us find folks,’ and they brought us whole binders full of women....”