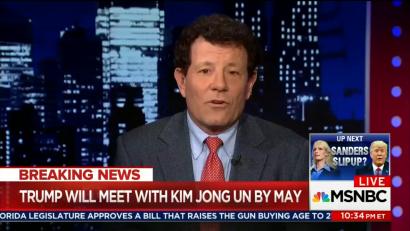 New York Times columnist Nicholas Kristof attacked the one network not pushing all-out for a Trump impeachment in the Sunday Review: “Is Fox ‘News’ Or Trump’s Bodyguard?” For the veteran liberal commentator, things were better during the Nixon impeachment period, when the three networks spouted the same brand of anti-Nixon corporate liberalism to an audience with few other news choices.

When President Richard Nixon’s Watergate misconduct was being dissected before congressional committees in 1973 and 1974, Republican support for him collapsed because most Americans shared news sources and inhabited a similar political reality.

Aides to Nixon did propose to him a plan to create sympathetic television news coverage; Roger Ailes backed the idea; and it eventually evolved into Fox News. And today Fox gives President Trump an important defense system that Nixon never had.

With Rep. Adam Schiff on the screen, Fox News’s graphic declared in all caps: “TRUMP HAS REPEATEDLY IMPLIED THAT SCHIFF HAS COMMITTED TREASON.” At a different moment, the screen warned: “9/26: SCHIFF PUBLICLY EXAGGERATED SUBSTANCE OF TRUMP-ZELENSKY CALL.”

CBS, NBC, and ABC were strident supporters of Bill Clinton during his 1998 impeachment, but that's not of import to Kristof. Fox News watchers are ignorant, Kristof discovered, through science:

The study found that those who regularly watched Fox News actually knew less about both domestic and international issues than those who watched no news at all. N.P.R. listeners were particularly well-informed, the study found, but even people who got their news from a comedy program like “The Daily Show” -- or who had no news source whatsoever -- knew more about current events than Fox viewers.

However, using the study to bash Fox News was of dubious value since, as noted by The Hollywood Reporter writer Paul Bond:

....The average person getting their news from FNC answered 1.08 international questions correctly and 1.04 domestic questions correctly, both of which were lower than viewers of “no news.” Viewers of MSNBC scored next to last in international questions (also below “no news”) and third to last (ahead of “no news”) on the domestic questions. The study, though, didn’t actually identify people who got their news only from one source, so they used “multinomial logistic regression” to create representations of such people who were then compared “to a hypothetical construct of someone who had no recent news exposure.”

Kristof briefly admitted having “made countless mistakes in my career, and this newspaper makes them almost every day.” Then he harkened back to the Iraq War to bash the network.

....when Fox News anticipated that troops would be welcomed with flowers and that the war would pay for itself. Early in the invasion of Iraq in 2003, I spent a scary, violent day with U.S. troops, and that night we watched a feed of Fox News -- and our jaws dropped as commentators ridiculed critics of the invasion and blithely insisted that Iraqis were welcoming us as heroes. The troops and I looked at each other in astonishment.

That’s an interesting take from Kristof, given that he wrote more or less the same thing in a March 2011 column about the warm welcome received by U.S. troops in Libya after President Obama intervened to overthrow dictator Muammar Gaddafi: "Hugs From Libyans.”

Kristof showed his wacky if sincere belief that the federal bureaucracy should be responsible for every aspect of the lives of Americans, and any questioning of its infallibility is deadly:

The right-wing media bubble and its conspiracy theories can even be lethal. During the 2009-10 swine flu epidemic, Democrats and Republicans initially expressed roughly equal concern. But then conservative commentators denounced the Obama administration’s calls for vaccination as a nefarious plot. Glenn Beck, then of Fox News, warned that he would do “the exact opposite” of what the administration recommended.

As a result, Democrats in the end were 50 percent more likely to seek vaccination than Republicans, according to the Journal of Health, Politics and Law. Some 18,000 people died in that flu epidemic, so it seems logical that some died because they believed Fox News.

In the meantime, Fox News is aggressively defending Trump, joining in smears of public servants and playing a role in history that embarrasses many of us in journalism.

Speaking of “embarrassing” -- has Kristof read his own paper lately?