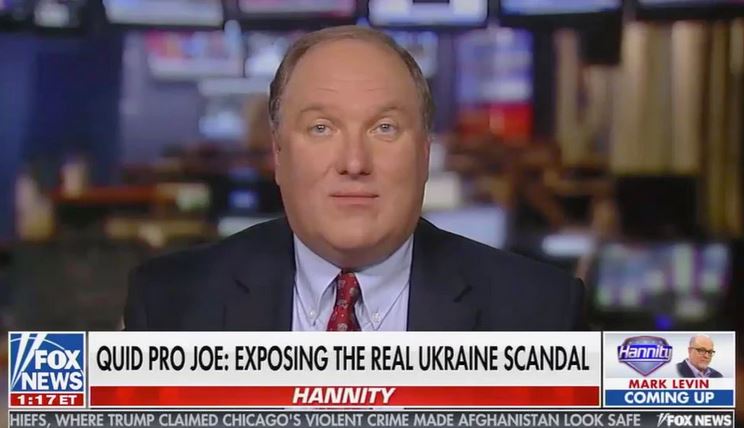 The New York Times has no compunction against going after fellow journalists who fail to sufficiently parrot Democratic-friendly stories. Times reporters Jeremy Peters and Kenneth Vogel investigated the work of fellow journalist John Solomon, “The Man Trump Trusts for News on Ukraine,” which posted on Tuesday.

The Biden campaign has fingered the journalist as an enemy for reporting on his son Hunter’s employment by Burisma Holdings, the Ukrainian gas company. The Times is doing its part in defending Biden by attacking Solomon's reporting:

In weeks of closed-door testimony, American officials who worked in Ukraine kept circling back to the work of one journalist, John Solomon, whose articles they said appeared to have considerable currency with President Trump’s inner circle.

....One witness testified to Congress that an article of his was full of “non-truths and non sequiturs.” Another witness said that he could not recall a single thing that was correct in one of Mr. Solomon’s stories, then added sarcastically, “His grammar might have been right.”

Ouch! An ominous tone pervaded this profile of a right-leaning newsman, one quite different from the valentines the paper regularly dispatches to left-wing journalist-activists like Rachel Maddow and Jon Stewart.

When Mr. Solomon appears on television and the radio, Mr. Hannity and other conservative hosts often identify him as an investigative reporter and cite his decades of experience at news organizations like the A.P. but his critics see this as a sleight of hand to give his writing a veneer of nonpartisan objectivity.

The paper found a surely objective source – an aide to a former Democratic majority leader (and partisan hack):

“Part of the issue is that for years he was identified with the mainstream media,” said James Manley, a former aide to Harry Reid, the former Senate majority leader who tangled with Mr. Solomon in the 2000s over stories insinuating Mr. Reid had benefited inappropriately from his office. The Columbia Journalism Review later singled out Mr. Solomon’s reporting, saying it was “much ado about very little.”....

While Mr. Solomon was at The Hill, his relationships with sources were sometimes closer than reporters typically get with the people they cover. In March, according to documents uncovered as part of the impeachment inquiry, he shared a draft of one of his stories before publication with a noteworthy group: people who had helped gather the information that Mr. Giuliani had provided to Mr. Solomon.

Yet Vogel himself, while working at Politico, shared a story with a DNC source before publication, as Brent Bozell and Tim Graham wrote in 2016 after a damning Wikileaks release: “...Vogel sent a story on Clinton fundraising to DNC national press secretary Mark Paustenbach for a pre-publication review. Now, checking for confirmation of some numbers or confirming a quote -- that’s okay. But the entire story? That is journalistic malpractice.”