Biden to Kimmel: ‘No Legitimate Journalist’ Believes Ukraine Claims Against Me 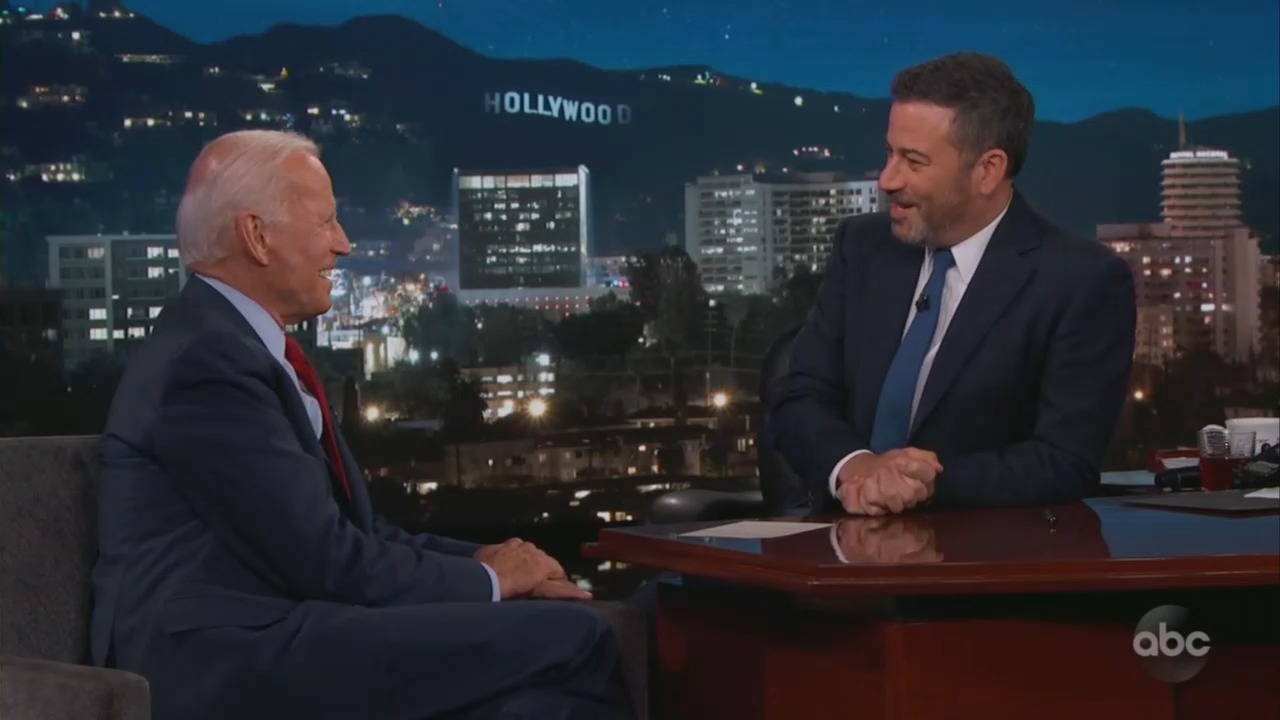 Joe Biden took another slap at the press on Wednesday night, falsely stating that “no legitimate journalist” gives any credibility to claims that, as vice president, he improperly  intervened on behalf of son Hunter Biden. After Jimmy Kimmel Live host Jimmy Kimmel wondered about the “gossip element” of the Ukraine story, Biden responded with an unprompted attack on unnamed reporters: “Look, you know, when you step back from it, this is not about me and my family. There's not one single solitary legitimate journalist in the world given any credibility to this.”

He added, “They've debunked all of what he had to say for the past —  since Giuliani started this a while ago.” Of course, Kimmel let this go and didn’t challenge the 2020 Democratic presidential candidate.

In fact, award-winning investigative journalist John Solomon has written about Biden’s efforts on behalf of his son. Writing in The Hill, Solomon explained:

As I have reported, the pressure began at least as early as January 2016, when the Obama White House unexpectedly invited Ukraine’s top prosecutors to Washington to discuss fighting corruption in the country.

The meeting, promised as training, turned out to be more of a pretext for the Obama administration to pressure Ukraine’s prosecutors to drop an investigation into the Burisma Holdings gas company that employed Hunter Biden and to look for new evidence in a then-dormant criminal case against eventual Trump campaign chairman Paul Manafort, a GOP lobbyist.

In a separate story from April, Solomon detailed:

At the time, Burisma [Holdings] allegedly was paying then-Vice President Joe Biden’s son Hunter as both a board member and a consultant. More than $3 million flowed from Ukraine to an American firm tied to Hunter Biden in 2014-15, bank records show.

According to [political officer in the Ukrainian Embassy in Washington Andrii] Telizhenko, U.S. officials told the Ukrainians they would prefer that Kiev drop the Burisma probe and allow the FBI to take it over. The Ukrainians did not agree. But then Joe Biden pressured Ukrainian President Petro Poroshenko to fire Ukraine’s chief prosecutor in March 2016. 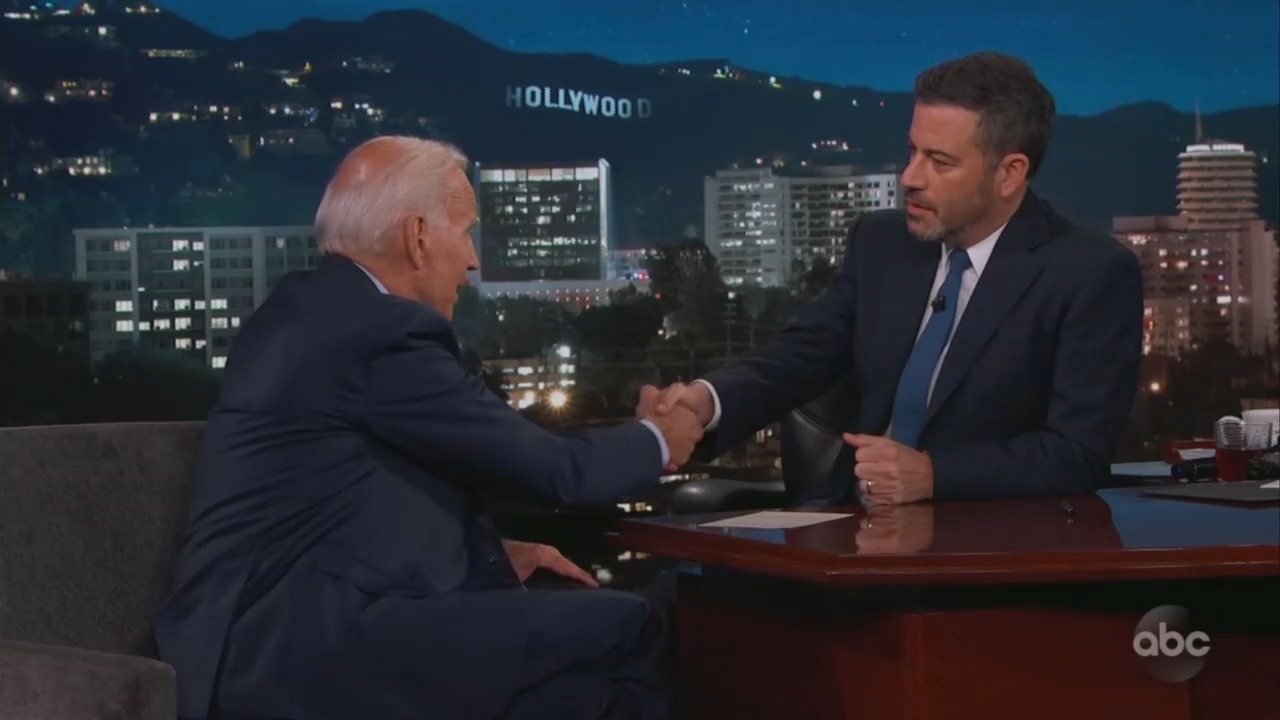 Of course, Kimmel didn’t mention any of this or challenge Biden’s attacks on the press. It was just last week that the Democrat yelled at Fox News reporter Peter Doocy, lecturing him and other reporters: “Ask the right questions!”

On Tuesday, as Biden called for Trump’s impeachment, he refused to take questions. Is this a candidate who respects the press? Certainly, reporters wouldn’t let Trump get away with such actions.

Instead of talking about any of this, Kimmel offered non-questions like this: “It is almost like you and President Obama left the door to the White House open and a bear got in. It is, it's crazy.” At one point, Biden thanked “pal” Kimmel for his efforts to prop up ObamaCare: “I want to thank you, not a joke.  Don't underestimate what you did, pal.”

A partial transcript of the Kimmel segment is below. Click “expand” to read more.

JOE BIDEN:  Our first guest tonight is the 47th Vice President of the United States, the leading candidate for the Democratic nomination, and the reason president trump used up all the international minutes on his cell phone plan calling Ukraine. Please say hello to Vice president Joe Biden.

KIMMEL: You've been in politics for quite some time. How does this rank as far as on the outlandish scale for you, the last 48 hours, watching this transpire?

KIMMEL: It is almost like you and President Obama left the door to the White House open and a bear got in. It is, it's crazy. [Cheers and applause] Have you heard from president Obama this week?

KIMMEL: You guys don't talk about this kind of stuff?

BIDEN: No, we don't talk about this kind of stuff.

KIMMEL: Is there a gossip element to this sort of thing, or does it just trouble you?

BIDEN: Look, you know, when you step back from it, this is not about me and my family. There's not one single solitary legitimate journalist in the world given any credibility to this. They've debunked all of what he had to say for the past —  since Giuliani started this a while ago. But what I do worry about, I do worry about all the other families that can't take care of themselves and what's happening with this President and his constant diversions into, look, we want to get his attention, have 70 polls in a row showing you're beating him and that all of a sudden gets his attention.

KIMMEL: How much of your desire to run is related to Donald Trump being president? In other words, if someone, if a decent man like Jeb Bush had won the Republican nomination, would, would you feel as motivated to run?

KIMMEL: What are your thoughts on, because I know that one of the things you believe strongly is that we can reach across the aisle, Democrats and Republicans can work together. You have many friend whose are Republicans. In fact, Lindsey Graham today said he considers you to be one of his very good friends. And then said, you know, and then he tagged something unpleasant onto it. Why aren't more Republicans standing up and saying “Hey, this is, we can't go along with this anymore?”

BIDEN: And by the way, I want to thank you, not a joke.  Don't underestimate what you did, pal. You fundamentally, because as you said, you pointed out, folks like you and I have gone through some difficult times. At least we've had the wherewithal and the coverage and the help. Imagine all the people, if the lights were on, if I asked all the people out there who have had a child that they lost to cancer or a serious disease or a serious problem and had real, real concerns about a family member who is in extremis, raise your hand if you have been through anything like that.