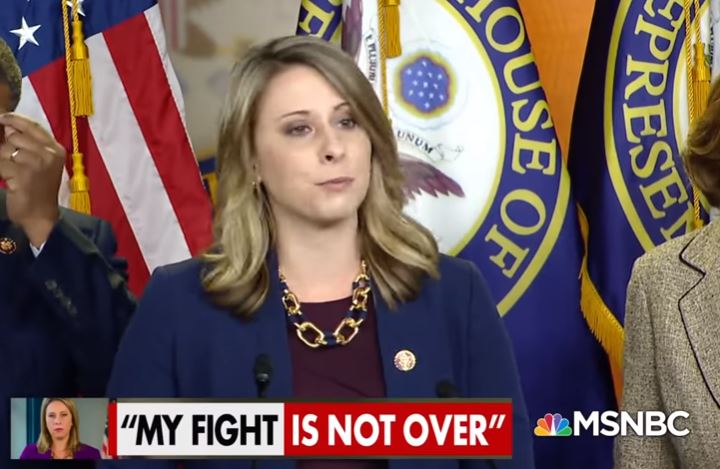 New York Times political writer Lisa Lerer made Tuesday’s edition with news of the resignation of the formerly rising Democratic Rep. Katie Hill of California, after a bizarre sex scandal involving campaign and congressional staffers, and fueled by explicit photos first reported by a conservative website.

Perhaps you’ve been following the case of Representative Katie Hill. Ms. Hill, a 32-year-old Democratic congresswoman from California, was a star of the 2018 midterm elections, branding herself “the most millennial candidate ever” even before she flipped her suburban Los Angeles district to blue.

Yesterday, she became the first female member of Congress to announce her resignation in the #MeToo era, after being accused of sexual relations with her staffers. But her resignation highlights another generational issue: the new kinds of internet exposure that lawyers and activists say could have an impact on a whole class of rising politicians.

Lerer tried to muddy the waters while blaming “the conservative news site RedState.”

The specifics of her story are complicated. Allegations that Ms. Hill and her husband, Kenny Heslep, were involved in a three-way relationship with a female campaign aide first circulated on the conservative news site RedState. Her husband, amid a contentious divorce proceeding, has also charged that Ms. Hill was having an affair with her legislative director, an accusation also reported by RedState.

The House Ethics Committee soon opened an investigation into Ms. Hill, making a young woman the first representative to be investigated under a new rule passed last year prohibiting sexual relations between members of Congress and staff members.

Ms. Hill’s story, however, has a thoroughly modern twist. The affair was revealed when RedState published text messages and nude photos of Ms. Hill in intimate poses. The photos, she said in a statement, were circulated by “an abusive husband who seems determined to try to humiliate me.”

For what it’s worth, House Speaker Rep. Nancy Pelosi, constantly praised as a political genius in the press, accepted Hill’s resignation pretty readily, saying on Sunday that "She has acknowledged errors in judgment that made her continued service as a member untenable. We must ensure a climate of integrity and dignity in the Congress, and in all workplaces." Lerer skipped that.

She is quick to blame sexism for women’s political woes. In May she co-wrote a tribute to the bad-polling feminist Democratic candidate, New York Sen. Kirsten Gillibrand, under the pseudo-clever headline: “Women Who Won Are Asked if They Can Win.” The text box on the jump page: “The misogyny Clinton faced in 2016 resurfaces for 2020.” At the time, a polling average showed Gillibrand polling at under 1%. The “misogyny” must have been really awful, among both male and female voters.

When Gillibrand dropped out of the race three months later, Lerer was back with excuses of sexism, under the headline “Gillibrand’s Failed Run Shows Feminism’s Promise and Limits.”