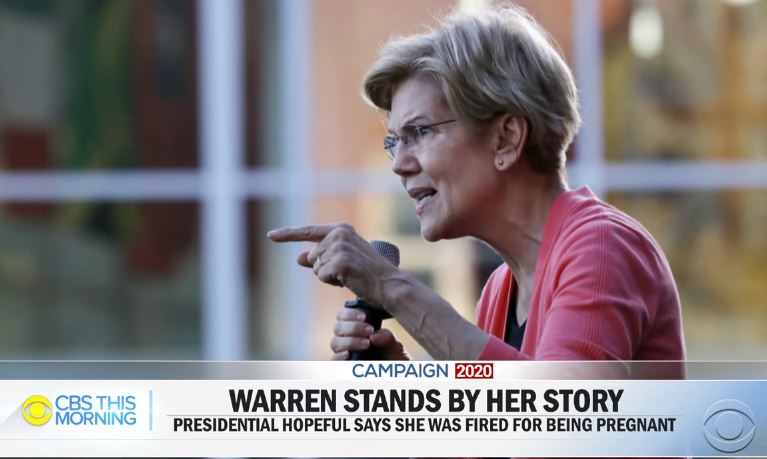 It turns out Warren has told two different stories over the years about leaving her teaching position. Previously she had claimed she left because of insufficient educational qualifications. But later she claimed she was fired for being pregnant. And minutes from a school board meeting indicate her contract was initially extended for another year.

But the story’s text box gave no hint of a possible contradiction in Warren’s account of her “firing” over the years: “Adding to an anecdote told on the campaign trail.” Neither did the online headline deck: “Elizabeth Warren Details Her Account of Losing Teaching Job Because of Pregnancy -- Ms. Warren said she had grown more comfortable talking about her experience over the years, explaining why her description of the 1971 episode in her stump speeches differs from how she discussed it in the past.”

The Times’ headline writers and Kaplan instead feverishly tried to protect her reputation for veracity, going so far as to talk on Twitter of Warren “refuting a conservative news site's challenge of her account” when she actually did no such thing. The paper aided her in changing the subject to a more general phenomenon of the time, when women lost jobs for becoming pregnant.

Senator Elizabeth Warren further detailed her experience of losing a teaching job because of pregnancy, refuting a conservative news site's challenge of her account. "I had an experience millions of women will recognize," she tweeted.

It was actually a Socialist magazine, Jacobin, that first challenged Warren’s account, but the Times probably knows its liberal fanbase would have a reliably Pavlov-type reaction on Twitter when baited with the phrase “conservative news site.”

It is one of Elizabeth Warren’s signature anecdotes in her stump speech: By the end of her first year as a public-school teacher, she was “visibly pregnant,” and the principal wished her luck and hired another teacher to replace her.

In recent days, a conservative news site and other outlets have cited evidence that challenges her account, including past remarks by Ms. Warren in which she did not mention being forced to leave the school and minutes from a school board meeting showing that her contract was initially extended for the next school year.

Ms. Warren is now pushing back against any suggestion that she has misrepresented the circumstances of her departure, and pointing to the discrimination that many pregnant women have faced on the job.

“I loved that work, and I would probably still be doing that work today, but my story has some more turns,” she told a crowd in Nevada last week. “By the end of the first year, I was visibly pregnant, and the principal did what principals did in those days: wished me luck and hired someone else for the job.”

She included a similar account in her 2014 memoir. In some retellings earlier this year, she said the principal “showed me the door.”

In a post on Twitter last week, Meagan Day, a writer for the socialist magazine Jacobin, drew attention to an interview Ms. Warren gave in 2007 in which she discussed the end of her career as a public-school teacher and did not describe being forced out because she was pregnant. Ms. Warren recalled going back to school because she lacked the education courses she needed.

“I went back to graduate school and took a couple of courses in education and said, ‘I don’t think this is going to work out for me,’” Ms. Warren said in the interview.

Addressing the differences in her accounts, Ms. Warren said in a statement to CBS News, “After becoming a public figure I opened up more about different pieces in my life and this was one of them.”

And that was good enough for the Times.

Kaplan did Warren’s feminist bidding, shifting the focus from her own shifting story to 1970s societal trends:

Randi Weingarten, the president of the American Federation of Teachers, wrote on Twitter about Ms. Warren’s experience, “This happened to women ALL the time.”

The Free Beacon took issue with the Times’ wording of “refuted” in the tweet: “Refute means to prove something false. We posted documents. She stuck to her story. To our colleagues at the New York Times: words matter.”

It’s also unclear why Warren would be granted an assumption of truth-telling, given her history of “Native American” ancestry and unsubstantiated stories about how her parents had to elope.