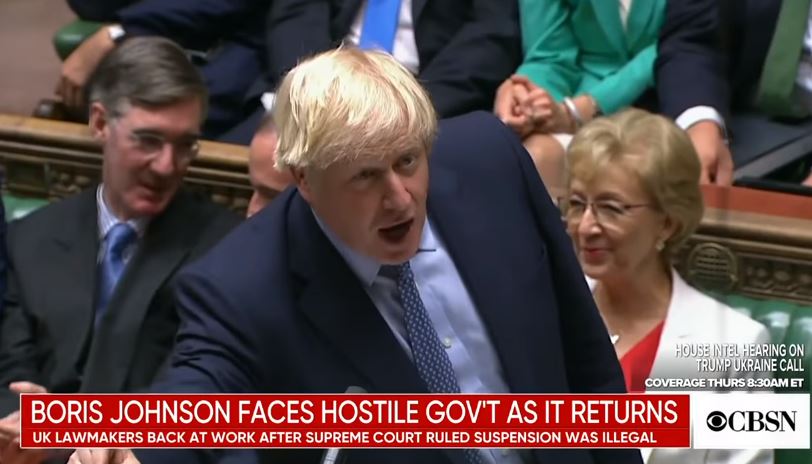 Such a story takes an amazing amount to nerve for the paper to publish, given that Brexiteers have been routinely derided and smeared, both by the left and in the Times, ever since the since British voted in a 2016 referendum to leave the European Union, a torturous process that’s still ongoing.

Since then the Times has blamed Brexit for, among other things, shorter life spans; racist and Islamophobic attacks, even “Talibanization.” Then there were the insults of Brexit supporters, for instance, mocking the “virtually cultlike certitude” of backers and a opinion contributor personally insulting pro-Brexit voters as  “old people, 80 and above, wearing blank stares.”

Yet the Times has the nerve to accuse Johnson of inciting violence with mild chiding about "surrender," which Mueller insisted "evoked war."

Mueller, who wrote many of the Brexit-and Boris Johnson)-bashing stories linked above, put on a show of moral aggrievement at Johnson’s language.

One after another, women rose in Britain’s House of Commons and pleaded with Prime Minister Boris Johnson to stop calling his opponents traitors, lest a madman take his words to heart.

Mueller has a very low bar for “slurs,” judging by the mild terms he defined that way.

But time and again on Wednesday night, Mr. Johnson pulled new slurs from his lexicon, accusing those who disagree with him of humiliating Britain, surrendering to Brussels and betraying their own constituents in phrases that evoked war with the European Union, not a wonky three-year negotiation.

As rowdy as Britain’s Parliament has been in recent months, Mr. Johnson’s eruptions marked a new front in the culture war over Brexit. Especially for the roster of women in Parliament who begged Mr. Johnson to calm his incendiary language, the outbursts were chilling, exposing the vitriol within parts of the Brexit project and the nastiness that lawmakers say Mr. Johnson has often reserved for women who stood up to him.

The prime minister’s remarks dampened hope of opposition lawmakers voting for a revamped Brexit deal and stirred alarm across Europe, where diplomats despaired over the prime minister’s bellicose tone and warned of his words’ fueling political violence.

In the run-up to the 2016 referendum, Jo Cox, an anti-Brexit lawmaker, was murdered by a man shouting “Britain first!” and “death to traitors.” Since then, women say they have gotten an avalanche of threats for standing in the way of Britain leaving the European Union without a deal governing future relations -- and all the dire repercussions that could cause.

Mr. Johnson has only stoked the flames, lawmakers said.

Mr. Johnson has long courted a fan base in Britain with what critics called crude, chauvinistic language, but supporters saw as nothing more than airy banter.

His columns in the right-wing Daily Telegraph were full of intemperate language generally, but some were particularly aimed at women.

Mueller stretched back to find examples of sexism to pin on Johnson.

As London mayor, Mr. Johnson was particularly disdainful of female elected officials in hearings, they said, so much so that the officials formally complained, attaching a seven-page document with examples from 2008 until 2011.

But he climbed Britain’s political ladder as a leading enemy of overweening political correctness, with his air of disheveled charm and posh obliviousness helping him skate past serious accusations of racism and sexism.

Mueller tarred Brexit supporters with the same extremely vague, almost ridiculous smears "Many of the leading Brexit backers were men, too." Really?

The Brexit debate laid the ground for an even more belligerent -- and male-dominated -- style of politics. A 2016 study found that 83 percent of the people featured in news coverage of the Brexit referendum that year were men. Many of the leading Brexit backers were men, too, and some of them flouted an agreement to suspend campaigning after Ms. Cox’s killing, instead urging their team to “press it harder.”

In the aftermath, some surveys found that as many as 9 in 10 women in Parliament reported being the targets of online abuse. A man with far-right ties was jailed this year for plotting to murder a Labour lawmaker, Rosie Cooper.