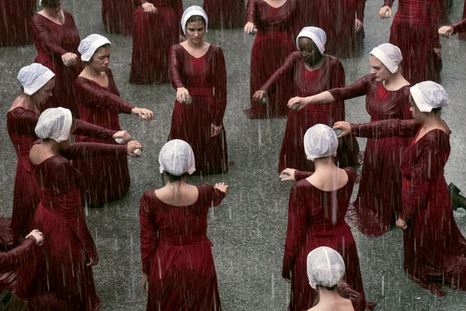 New York Times publishing-industry reporter Alexandra Alter interviewed novelist Margaret Atwood about The Testaments, her new novel, a sequel to her infamous The Handmaid’s Tale, which has been repurposed as a hit streaming show and a source of feminist memes and protests against the Trump administration in general, and pro-life legislation in particular. “A Return To Gilead 15 Years Later” topped the front of Saturday Arts section.

Alter addressed Atwood’s long hesitation to revisit what Alter called “her 1985 dystopian classic about the women of Gilead, a religious autocracy in what was formerly the United States, where fertile women are subjected to ritualized rape and forced to bear children for the upper class citizens.” The reporter observed the story had become “a pop culture phenomenon, a political rallying cry and a hit television series on Hulu.....Women dressed as handmaids have flooded Congress and state capitols to protest new restrictions on reproductive rights.”

The Times can’t shake the fantasy that the United States has transformed into some dystopian society under President Trump.

Atwood, who will turn 80 this year, was in high spirits as she reflected on her work, mortality and the surprising prescience of The Handmaid’s Tale.

After the election of President Trump, sales of The Handmaid’s Tale surged and readers noted how timely it felt. Some elements have become even more aligned with current events, with the erosion of reproductive rights, separation of parents from their children at the border and the targeting of minorities by white supremacists. Did you want to write a sequel in part to address some of those new parallels?

Atwood let drop an interesting reason why Hulu had to change the racial aspects of the book (“Hulu has a diversity clause.”) Alter goaded Atwood:

How do you feel about the fact that your book has taken on new political resonance and that you’re sometimes held up as a figurehead of the resistance?....Is it also kind of depressing that people are seeing echoes of your fictional dystopia in contemporary politics?

From a political point of view, the desired outcome of The Handmaid’s Tale would have been that it would fade into obscurity as a period piece, so that my dire warnings would not prove to be correct. That’s not the turn that history has taken.

In anticipation of the sequel’s release, Joumana Khatib gave the paper’s eager Trump-hating readers a heads-up. “A ‘Handmaid’s Tale’ Sequel Is on the Way. Here’s How to Prepare -- Everything to read and watch before you get your hands on Margaret Atwood’s much-anticipated book.” Khatib insisted that “Atwood’s story, set in a religious, totalitarian state where women are stripped of their rights, has taken on new cultural resonance in recent years, with the handmaids becoming a crossover symbol for activists.”

.... our chief TV critic, James Poniewozik, looked at the parallels between Gilead and our present day. “I hate to say the story is newly relevant, as if it weren’t for three decades,” he wrote. “But face it: When you have a president who talks about women as if they were squeeze toys, who implied a tough female journalist was on her period, whose administration gathered a room full of male politicians to discuss women’s health coverage -- well, the viral marketing takes care of itself.”

In October 2018, Alter discussed the “handmaid” motif used for protest during the Brett Kavanaugh hearings, while describing author Atwood as “a sort of patron saint of feminist dystopian fiction.”