Now the NY Times Tells Us: Mueller’s ‘Wobbly’ Testimony No Surprise to Subordinates 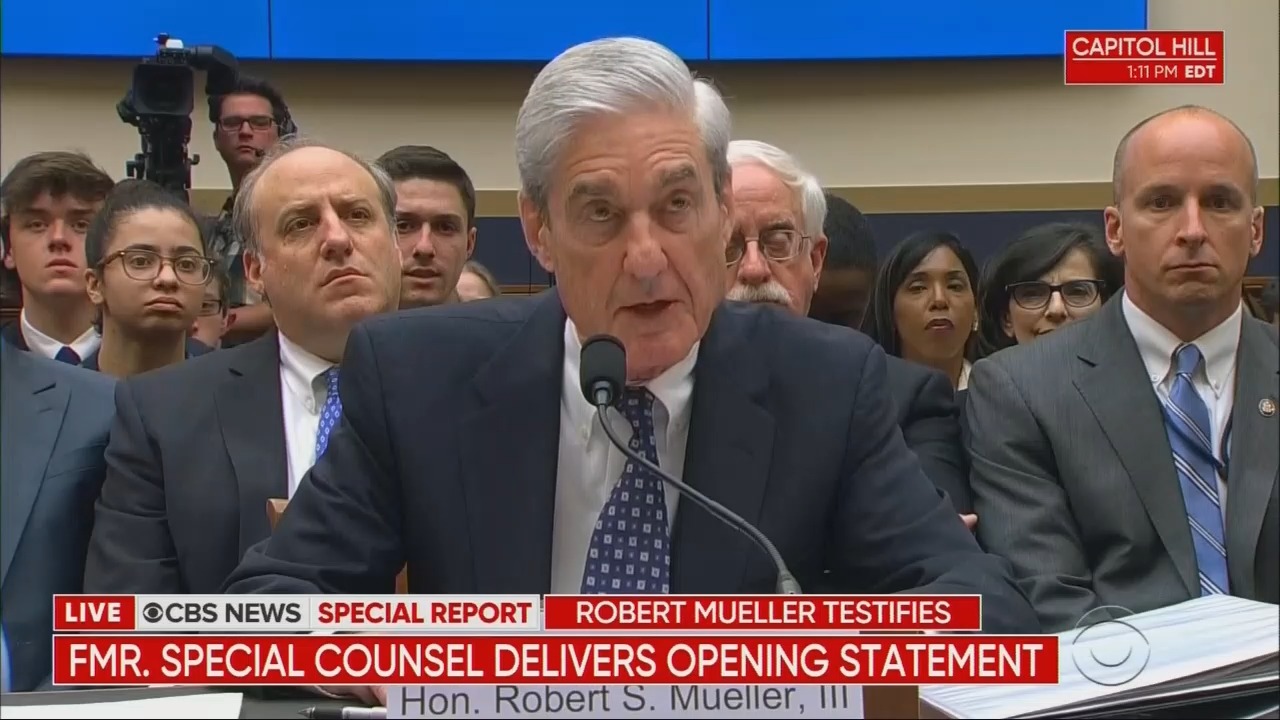 The New York Times gave former special counsel Robert Mueller’s testimony on Capitol Hill a negative review in Thursday’s edition, terming it “shaky” and “halting,” even “excruciatingly awkward,” while tucking in rumors that he wasn’t fully engaged in the prosecution.

Can one detect some frustration, even embarrassment in the paper’s coverage, now that the former special counsel, whose reputation for tenacity and “straight-arrow,” law-and-order omniscience the Times helped inflate, has flopped hard in public view?

Now that Mueller’s shaky command of the details in his own report is public knowledge, we learn there were hints beforehand, which the Times apparently chose not to share.

But the rest wasn’t as favorable for the former Democratic hero: “A Halting Delivery at Odds With Laser Focus of the Past,” a four-reporter team-up, launched with interesting background detail.

Soon after the special counsel’s office opened in 2017, some aides noticed that Robert S. Mueller III kept noticeably shorter hours than he had as F.B.I. director, when he showed up at the bureau daily at 6 a.m. and often worked nights.

He seemed to cede substantial responsibility to his top deputies, including Aaron Zebley, who managed day-to-day operations and often reported on the investigation’s progress up the chain in the Justice Department. As negotiations with President Trump’s lawyers about interviewing him dragged on, for example, Mr. Mueller took part less and less, according to people familiar with how the office worked.

That hands-off style was on display on Wednesday when Mr. Mueller testified for about seven hours before two House committees. Once famous for his laserlike focus, Mr. Mueller, who will turn 75 next month, seemed hesitant about the facts in his own 448-page report. He struggled at one point to come up with the word “conspiracy.”

At one excruciatingly awkward moment, he stumbled over a poorly worded question about who was president when he served as a top federal prosecutor in 1986, apparently assuming the questioner meant his subsequent Justice Department post.

“He didn’t have the fight in him that he used to have,” said Glenn Kirschner, who worked with Mr. Mueller as a homicide prosecutor in the mid-1990s.

Mr. Mueller’s halting delivery stood out all the more given his towering reputation for a command of facts and physical stamina -- the stuff of lore among his former aides and colleagues.

(And also stuff of lore at the Times.)

Nonetheless, he was unmistakably shaky. Roughly 15 times, he asked for a question to be repeated. He repeatedly said, “If it’s from the report, yes, I support it” -- a line that seemed to suggest that he did not know what the report actually said. He seemed to struggle to complete his sentences, and not always because he had been interrupted.

The paper was so critical of Mueller that it even gave Attorney General William Barr credit.

Had Mr. Mueller delivered a commanding performance -- even if he said little -- he might have cemented that impression. Instead, he may have ignited a whole new set of questions about whether he was too old for the job he took on, whether he delegated too many decisions to his top deputies, and whether he was reluctant to testify because he was not up to it.

In fact, those suspicions already had some currency. In Senate testimony this year, Attorney General William P. Barr suggested that in a March 5 meeting, Mr. Mueller did not clearly articulate his reasoning about why he declined to decide whether President Trump had committed a prosecutable crime.

More from the “Now They Tell Us!” file at the very end:

But what has dribbled out suggests that Mr. Mueller’s wobbly performance might not have come as a surprise to his subordinates.

The calendars of one of the team’s top prosecutors, Andrew Weissmann, suggest that he met infrequently with Mr. Mueller apart from a daily 5 p.m. staff meeting, which typically lasted 45 minutes.

Instead, the calendars cite Mr. Zebley’s initials 111 times, often next to “team leader” meetings, suggesting he may have led them.

The other lead story, by Mark Mazzetti, reiterated criticism of Mueller’s weak performance:

Lawmakers hunted for viral sound bites and tried to score political points, but Mr. Mueller consistently refused to accommodate them, returning over and over in a sometimes halting delivery to his damning and voluminous report.... His performance on Wednesday -- especially during the morning session -- was tentative and at times shaky as he struggled to clarify different aspects of his complex report.

Peter Baker’s “news analysis” was similarly critical of Mueller on the Hill.

Columnist Nicholas Kristof rode to Mueller's rescue, armed with politically weaponized self-righteousness. The text box in print read: “Sadly on Wednesday, some House members put party before country.” (Those would be Republicans, naturally.)

....I was struck and saddened by the way some Republicans lashed out at Mueller and tried to discredit him. After all, Mueller is a lifelong Republican, a decorated veteran and a longtime law enforcement leader -- precisely the kind of person one might expect Republicans to show respect for.

If Mueller truly is a “lifelong Republican,” why hasn’t the Times been attacking him like it does all the other Republicans?