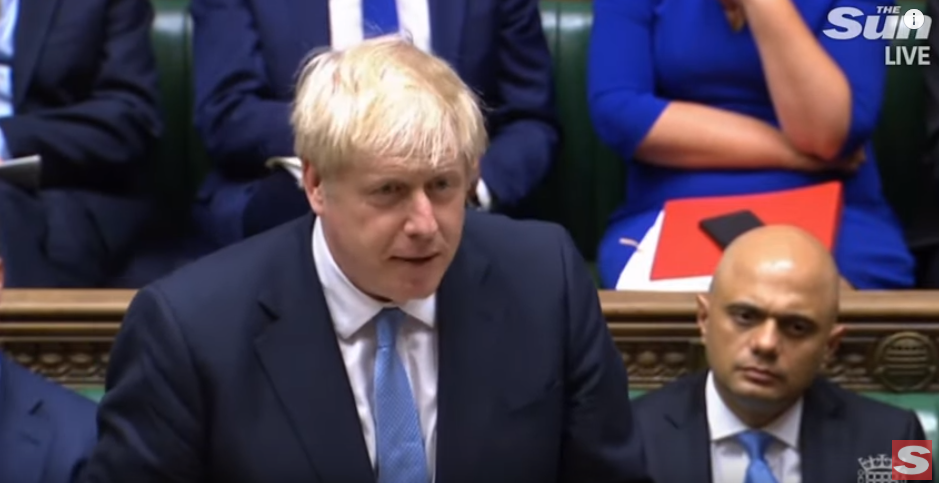 There was no honeymoon for Boris Johnson, the new Conservative Prime Minister of the United Kingdom, in the New York Times. The same old hostility greeted him, and his push to make good on the 2016 referendum to leave the European Union, known as Brexit.

One hysterical Times story panicked that “his premiership could bring about the end of Britain itself.”

In another story, reporters Sarah Lyall and Stephen Castle launched Johnson into office on Thursday with “Johnson Takes Over as British Leader With Vow on Brexit.”

His jacket neatly buttoned, his hair corralled into chaos-free submission, Boris Johnson stood outside Downing Street on Wednesday and in his first moments as prime minister promised to do what so far has proved impossible: lead Britain through an orderly, on-time exit from the European Union.

“The doubters, the doomsters, the gloomsters -- they are going to get it wrong,” he declared. “The people who bet against Britain are going to lose their shirts.”

It was a supremely confident, at times grandiloquent address from a man whose silver-tongued talk often surpasses his performance. After a lifetime of joking and blustering and maneuvering his way into jobs and then sabotaging himself with poor preparation and deceitful behavior, Mr. Johnson, 55, seems determined to prove he can put aside his court-jesterish ways and rise to the occasion.

In Europe, Mr. Johnson has been an unpopular figure ever since his days as a young journalist writing inaccurate articles portraying Europe as a wasteful, bloated bureaucracy determined to do things like enforce one-size-fits-all condoms. Nor did he make many friends as foreign secretary under Mrs. May, or in recent months as he maneuvered to become prime minister and increased the volume of his anti-Europe rhetoric.

Donald Tusk, the president of the European Council, sent Mr. Johnson a terse letter that had an ominous “see me after class” vibe. After offering his congratulations, Mr. Tusk added a single sentence that appeared to allude to Mr. Johnson’s reputed sloppiness with the fine points of issues.

On Wednesday, Lyall wrote the rather prim “Bringing a Dating Man’s Lifestyle to Downing Street – London Braces For a Spectacle.”

As he finally moves into the job he has wanted all his life, the newly anointed prime minister, Boris Johnson, brings with him a formidable array of challenges, the most pressing being his promise to extricate Britain from the European Union.

He also brings a chaotic personal life and, as the first single prime minister in more than 40 years, an unsettled domestic situation unique in the annals of modern-day prime ministerial politics.

Separated from and in the process of divorcing Marina Wheeler, his wife of 26 years, Mr. Johnson has since last year been dating and intermittently living with Carrie Symonds, 31, a former spokeswoman for the Conservative Party. Ms. Symonds has been credited with getting Mr. Johnson, 55, to cut his hair, lose some weight, affect more gravitas and start wearing clothes that look to be ironed.

But the couple have not appeared at any public events or been photographed together since neighbors called the police last month to report that the two were having a loud argument at her apartment. (The police said they visited and there was no need for further action.)

Neighbors said Ms. Symonds could be heard accusing Mr. Johnson of spilling red wine on her sofa and being spoiled about money.

“Rather than wine stain, he should be worried about the stain he is making on British politics,” [Liberal Democrat member of Parliament Ed] Davey told The Mail.

Keep in mind that Lyall is not a fan of Boris or Brexit. She certainly didn’t think Johnson would ever make it to No. 10 Downing Street. As she wrote in the summer of 2016:

As he abandoned his campaign to be the Conservative Party leader -- and with it, probably, his chances of ever being prime minister -- he seemed almost relieved to be spared the burden of running the country he had done so much to destabilize.

Richard Perez-Pena did some doomsaying in a Wednesday explainer, “How Does a New Face Change the Debate For a Brexit Deal?”

Leaving abruptly without a deal would mean new customs and tariff barriers, and would put Britain under World Trade Organization trading rules, which economists say are less advantageous and do not fill in all of the relevant blanks.....One economic authority after another has reported that a sudden no-deal Brexit would do deep, lasting harm to Britain....Experts warn that crashing out of the bloc without a plan could bring travel disruptions and shortages of food, medicine and other goods.

On Monday, with Johnson’s promotion all but a formality, reporters Benjamin Mueller and Stephen Castle offered the unwelcoming “The Details, or Lack of Them, of How Johnson Governs,” The online headline: “Boris Johnson Does Things With Flair, but Does He Do Them Well?”

The Times became even more hysterically anti-Boris in the opinion pages, with British journalist James Butler claiming that Boris’s reign (which hadn’t even begun) threatened Britain itself. “Boris Johnson Is How Britain Ends -- Not with a bang, but with a burst of blond ambition.”

....Mr. Johnson, whose laziness is proverbial and opportunism legendary, is a man well practiced in deceit, a pander willing to tickle the prejudices of his audience for easy gain. His personal life is incontinent, his public record inconsequential.

And his premiership could bring about the end of Britain itself.