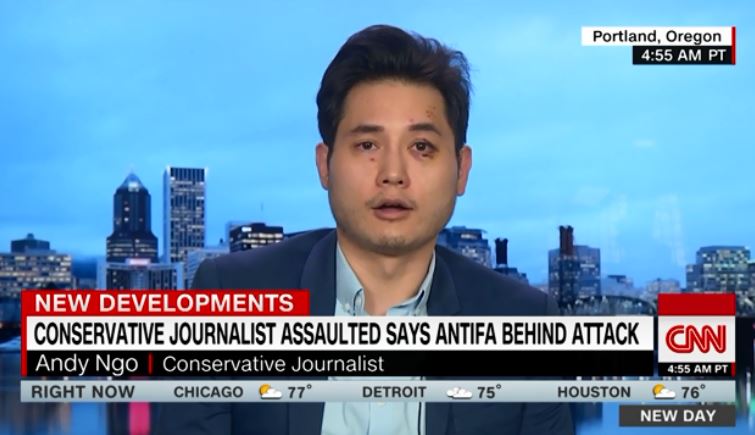 The brutal beating on Saturday of Quillette editor and conservative journalist Andy Ngo by Antifa thugs at a rally in Portland, Ore., was finally noticed in Tuesday’s edition, only to be buried under distracting details about milkshakes and aspersions on Ngo's previous reporting.

The paper’s headlines conveyed no specifics: “Police Tactics Questioned Amid Violence in Oregon,” by new Times reporter Mike Baker. The online headline: “In Portland, a Punch and a Milkshake Rumor Feed a Fresh Round of Police Criticism.”

Milkshakes are the violent left’s new weapon of choice in their war against anyone they wish to call Nazis -- i.e., anyone who disagrees with their thuggish “anti-fascist” tactics.

The story’s text box referenced a tweet from the Portland Police: “A tweet about cement added to milkshakes fueled the furor.” That was also the angle of Baker’s emphasis on his Twitter.

Baker’s story started out fine, but got more biased as it went along. One would give the story credit for length, if not for the fact that 14 of the 29 paragraphs were taken up with the disputed claim that cement was added to Antifa’s milkshake recipe, a detail the reporter leveraged seemingly to make Antifa’s actions seem less violent – it’s just a milkshake, right?

It was by now a familiar scene of summer street warfare in Portland: Conservative marchers, this time pushing a #HimToo message in one of the nation’s most progressive cities, faced down a rowdy group of anti-fascist protesters.

Soon the tensions escalated, with a black-clad activist striking the conservative journalist Andy Ngo in the face while others slimed him with what protesters said were vegan coconut milkshakes. Mr. Ngo was left bloodied and obviously shaken, reporting the attack in a video livestreamed to his more than 140,000 Twitter followers when a city medic arrived to check on him.

“Where the hell were all of you?” Mr. Ngo demanded.

Fueling the conservative alarm was the Portland Police Bureau’s own suggestion on Twitter during the height of the protests -- later walked back slightly -- that anti-fascist protesters had laced their milkshakes with quick-drying cement before lobbing them at the marchers.

With political polarization on the rise, the nation’s fraught conversations over immigration, race and policing are increasingly being held in tense street showdowns punctuated with eggs, bricks and, lately, milkshakes. Portland’s long history of street activism has made the city a central stage for many of those conflicts; this weekend’s protests left the police department facing unusual criticism that it had not only been slow to halt the violence, but with its questionable claim about cement milkshakes, had dramatically fueled the furor.

Mr. Ngo is an independent journalist in the Portland area who works with the online magazine Quillette, a publication which prides itself on taking on “dangerous” ideas -- in some cases, writing about genetic notions of race, in others, about the shortfalls of feminism. Mr. Ngo has also written for The Wall Street Journal, including an opinion piece in 2018 highlighting the prominent display of Muslim identity as an example of “failed multiculturalism” in London.

Baker’s description of Ngo’s work would be laughable if it wasn’t so sad:

He has a history of battling with anti-fascist groups, with the two sides sharing a mutual antipathy that dates back many months. The conservative journalist has built a prominent presence in part by going into situations where there may be conflict and then publicizing the results.

Otherwise known as “journalism,” a job the mainstream media has been reluctant to undertake regarding Antifa’s violent tactics.

The second half of the story was devoted solely to the “cement milkshake” controversy, dropping the unprovoked violent assault on Ngo.

Mr. King said he understood the criticism about how long it took to address Mr. Ngo’s injuries, and said there would be an assessment of the handling of the demonstration.

Still unclear on Monday, though, was the police department’s tweet during the demonstrations about milkshakes.

“Police have received information that some of the milkshakes thrown today during the demonstration contained quick-drying cement,” the department wrote in a message that has now been shared more than 13,000 times and talked about by prominent conservative voices such as Ann Coulter and Laura Ingraham.

Effie Baum, an activist with a Portland group called PopMob, said police officials were wrong --they were vegan milkshakes made not of cement, but of coconut ice cream, cashew milk and some sprinkles.

The story revealed that yes, maybe some normal milkshakes were used as weapons, but Baker didn’t treat that as a problem.

Other images, of course, showed what looked like milkshakes being lobbed as missiles, but those, in Ms. Baum’s view, were aberrations.

“We served over 750 of those milkshakes,” she said. “The vast majority of them were consumed.”

Forget the milkshakes thrown at our political opponents -- instead, focus on all the ones that we didn’t throw!