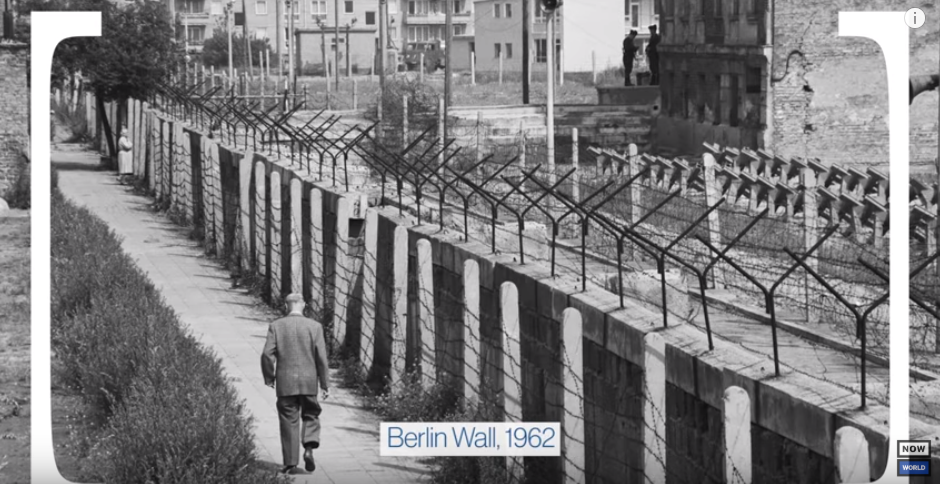 The New York Times is still trying to refurbish the thuggish reputation of the Communist regime of East Germany, once part of the Eastern Bloc, Soviet-aligned countries of Eastern Europe.

The latest sad example came from reporter Thomas Rogers in Berlin, dedicated to the now-demolished Palast der Republik, former home of the (in name only) East German Parliament: “Symbol of Brutality or Social Spot? – Reflecting on East German’s Palast, a demolished colossus.” The online headline: “Symbol of a Brutal Regime? Or a Fun Place to Party?”

For many former East Germans, the decision to tear down one of the architectural showpieces of the German Democratic Republic, or G.D.R., was a form of historical vandalism.

Rogers was gentle with the monstrous East German regime.

The communist G.D.R. was a one-party state where many citizens were systematically monitored by intelligence services and people faced severe consequences if they spoke out against the regime.

But it still arouses nostalgia among some former citizens who fondly remember its gender egalitarianism and social safety net or admire its utopian aspirations.

A “social safety net” that utterly failed, and “utopian aspirations” toward a totalitarian monoculture? What’s to admire?

But criticism of the evils of the Communist regime are the fault of simple-minded and un-“nuanced” mindsets.

Elke Neumann, the exhibition’s curator, said that many Germans have an overly simplistic understanding of East Germany, and that she hoped the exhibition would help people form a more nuanced view of the G.D.R.

“Many people still think everything was black and white,” she said in an interview. “It makes sense for people to see what was actually there.”

A unique mixture of government building and leisure destination, it housed the (largely symbolic) Parliament of the G.D.R., as well as nearly a dozen venues for eating and drinking, a theater, a bowling alley, a post office and a youth club. It also boasted two auditoriums, including a hexagonal space with unique, diagonally retractable seating that allowed it to accommodate events ranging from state dinners to rock concerts.

More “yes, but look at the bright side” formulation that the Times wouldn’t dare do for a fascist regime, or Chile or Spain or Nazi Germany.

“The building gave East Germans an identity, in a positive sense,” Moritz Holfelder, a journalist who has written a book about the building, said in a phone interview. Although the Palast symbolized a repressive regime, he argued, it was primarily seen as a place for everyday activities: eating, dancing and celebrating family occasions.

And it is far from the first attempt by the Times to paint over East Germany’s Communist tyranny.

In October 2010, reporter Michael Slackman wrote with nostalgia on the disillusionment felt by some after German reunification: “Yet no one here is whitewashing the disappointment, the sense even now, two decades later, of feeling treated as immigrants in their own country, of the deeply insulting perception that their values -- forged in a socialist state -- were expunged and delegitimized...."Yes, it was a dictatorship, a state of injustice, no freedom, but there were 17 million different lives," said Ms. Kummer, who forged a successful career as a reporter for The Thuringer Allgemeine daily newspaper. "For many, it was a good life," she said. "You can't just forget that."

An October 2008 headline: "East Germany Had Its Charms, Crushed by Capitalism."

A December 2012 profile by Dennis Lim of the director of the film Barbara, set in 1980 East Germany: "Summoning Halcyon Days Of Failed Ideals."

Katrin Bennhold’s front-page story from February 2018 commemorating the fall of the Berlin Wall and the continuing conflict between the former East and West Germany, “Still Chipping Away at a Wall Demolished a Generation Ago,” contained an incredibly ignorant paragraph about the freedoms of East German women:

Eastern women, who were part of the work force and with free child care, were more emancipated than their western sisters, and proved to be more mobile than their male counterparts. Some eastern villages now have two or three men for every woman -- the kind of ratio one otherwise finds near the Arctic Circle, demographers say.

Can one even conceive the Times running a headline that suggested a fascist society like Nazi Germany had its good points, despite failures?