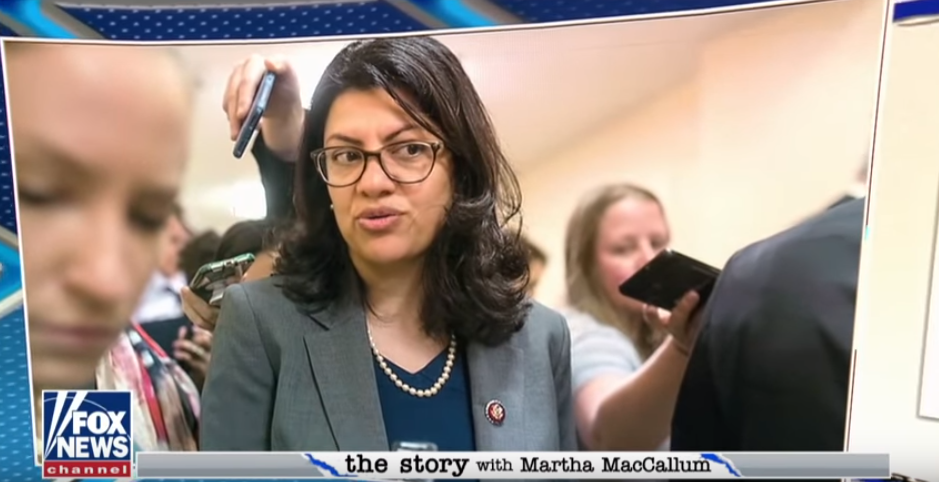 New York Times reporter Sheryl Gay Stolberg handled the latest disturbing anti-Israel outburst from a controversial Democratic freshmen representative...by rushing to Rep. Rashida Tlaib’s defense in Tuesday’s edition under a headline that reduced the controversy to a partisan squabble: “A ‘Calming Feeling,’ a Furor and a  New Front in the War Over Anti-Semitism.”

Appearing on a Yahoo News podcast, Tlaib made a bizarre and historically fraudulent comment on Jews fleeing persecution and Palestinians supposedly giving them refuge after the Holocaust (a self-serving pro-Palestinian myth from Tlaib):

There’s always kind of a calming feeling I tell folks when I think of the Holocaust, and the tragedy of the Holocaust, and the fact that it was my ancestors -- Palestinians -- who lost their land and some lost their lives, their livelihood, their human dignity, their existence in many ways, have been wiped out, and some people’s passports. And just all of it was in the name of trying to create a safe haven for Jews, post-the Holocaust, post-the tragedy and the horrific persecution of Jews across the world at that time. And I love the fact that it was my ancestors that provided that, right, in many ways. But they did it in a way that took their human dignity away and it was forced on them.

The paper’s response fits the media pattern. When a Democrat says something offensive or controversial, the media reacts not to the actual Democratic statement, but how the Republicans reacted to it, “pouncing” or otherwise. Stolberg instantly leapt to the Democrat’s defense in the lead.

What Representative Rashida Tlaib said in a Yahoo News podcast about the Palestinian role in the founding of Israel was questionable history and not particularly eloquent. But it wasn’t what House Republican leaders suggested it was: a statement that the slaughter of six million Jews in the Holocaust gave Ms. Tlaib “a calming feeling.”

The text box also tried to put Republicans on the defensive: “Democrats demand an apology from the president and G.O.P. leaders.”

The fight grew out of comments that Ms. Tlaib, the first Palestinian-American woman in Congress and a vocal critic of Israel, made to the journalists Michael Isikoff and Daniel Klaidman. In thinking about the Holocaust, Ms. Tlaib, whose grandmother lives on the West Bank, said she had a “calming feeling” knowing that her ancestors had lost their land and their livelihoods in the creation of “a safe haven for Jews” after World War II -- a statement that is not historically accurate.

But in Republicans’ telling, Mr. Tlaib never uttered the words “tragedy and horrific persecution of Jews.” Instead, Representatives Steve Scalise and Liz Cheney, the No. 2 and No. 3 Republicans in the House, seized on the words “calming feeling” in the headlines of back-to-back statements they issued Sunday casting Ms. Tlaib as an anti-Semite.”

The Republicans’ moves are yet another sign that they are looking to exploit growing Democratic divisions over Israel for political gain, by breaking the longstanding ties between Democrats and Jewish voters....

Beyond the Capitol, Ms. Tlaib’s comments made others deeply uneasy because she was wrong on the facts. Far from a safe haven, pre-independence Palestine was wracked by violence, culminating in Israel’s war for independence during which both sides suffered civilian deaths.

Moreover, Mr. [Aaron David] Miller noted, the Grand Mufti of Jerusalem, Mohammed Amin al-Husseini, had allied himself with Nazis and fiercely opposed the creation of the Jewish state. Of Ms. Tlaib, Mr. Miller said: “She recognized the horrific nature of the Holocaust. Then she deployed it to make a series of confused, unaware and even ignorant assumptions with respect to what that means for the Palestinians.”

But a photo caption put the onus on the Republican response, not the Democrat’s actual words: “Supporters of Representative Rashida Tlaib, Democrat of Michigan, say Republicans have twisted her words for political gain.”

Not to be outdone, Stolberg’s Times colleague Jonathan Weisman (who refuses to acknowledge anti-Semitism on the left) fiercely defended Tlaib against Republicans on his Twitter account, quoting an addled New York magazine piece by Jonathan Chait, “Republicans Call Tlaib Anti-Semitic for Saying Something Nice About Israel.” Weisman approvingly quoted Chait: "The claim that Tlaib said the Holocaust itself was 'calming' is a pure lie. Tlaib was using the term in reference to a tragedy, but the tragedy is the loss of Palestinian land. She is arguing that the loss was offset by a gain for Jews is calming to her."

Stolberg has been giving Omar and Tlaib the benefit of the doubt since they first took office.

The Times has previously protected Tlaib by truncating her offensive anti-Jewish comments.