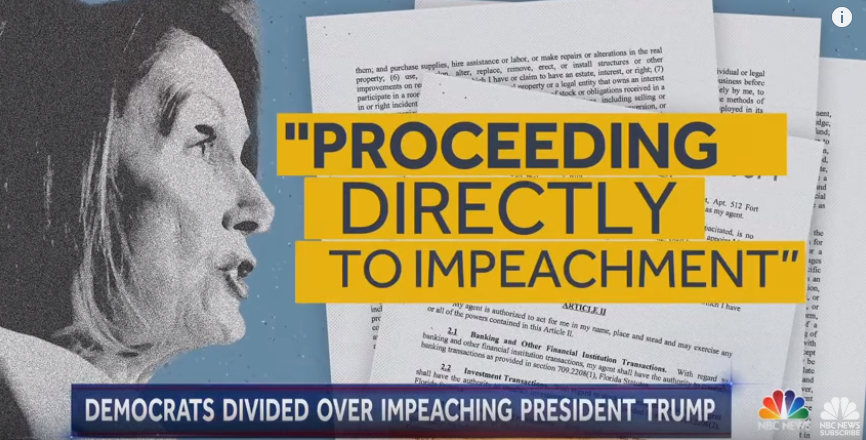 As Democrats make hay out of the potential “obstruction of justice” details in the Mueller report and ponder impeachment proceedings, the New York Times is taking a much more enthusiastic line on impeaching a president than it did the last time it was done, to Democrat Bill Clinton, in 1999.

Sheryl Gay Stolberg and Nicholas Fandos reported on Thursday’s front page under a headline suggesting Democrats would only be upholding their sacred duty by impeaching Trump: “Impeachment Divides a Party Balancing Duty With Danger.”

As Speaker Nancy Pelosi urges caution on impeachment, rank-and-file House Democrats are agonizing over the prospect of trying to oust President Trump, caught between their sense of historic responsibilities and political considerations in the wake of the special counsel’s damning portrait of abuses.

The Democrats -- including more than 50 freshmen -- are mindful that impeachment poses political risks that could endanger the seats of moderates and their majority, as well as strengthen Mr. Trump’s hand. They ran on kitchen-table issues dear to their constituents and do not want to be consumed in a partisan morass that might unite Republican voters in opposition. But some prominent members of the 55-member strong Congressional Black Caucus and a newly empowered progressive caucus are pressing for action -- three Democrats have filed articles of impeachment against Mr. Trump and dozens of others have signaled a willingness to consider that path.

“A realization is setting in that this moment has found us,” said Representative Jared Huffman, a fourth-term Democrat from Northern California, who is advocating impeachment. “We cannot ignore it. We cannot wish it away. For some, this may be a very, very difficult matter. But this is why we have a House of Representatives. And this is absolutely what our founders imagined when a president did these sorts of things.”

Lawmakers of color, such as Representatives Maxine Waters of California, Al Green of Texas, Rashida Tlaib of Michigan and Alexandria Ocasio-Cortez of New York, seem to be leaning in the farthest. Ms. Tlaib had a pointed message for those who want to leave the decision to voters, or worry that impeachment would diminish their electoral prospects.

The only discouragement to the impeachment rush was concern over how it would play politically.

But, she added, there is “also a political calculation. What are the politics of initiating an impeachment if the Republican-led majority in the Senate doesn’t believe that this type of conduct warrants impeachment?”

The Democrats are so thoughtful and historically minded:

Representative Jamie Raskin of Maryland, a constitutional law professor, has a well-marked copy of the Federalist Papers on his nightstand.

Unlike those partisan Republicans:

Bedeviling pro-impeachment Democrats are not other Democrats but a united Republican Party that is not even acknowledging the abuses outlined by the special counsel...

Constitutional scholars say that similar offenses -- ones involving the lawless use of official power threatening the constitutional order -- are what the framers thought could justify removal from office.

Does Mr. Trump’s conduct, as described in the Mueller report, clear that high bar? The two most recent impeachment proceedings, against Presidents Richard M. Nixon and Bill Clinton, indicate that it could.

That recent article revealed strange new respect for the Clinton impeachment, which the Times was not exactly on board at the time, back in 1999.

The Media Research Center documented then-CNBC host Geraldo Rivera obnoxiously rejoicing over theTimes' editorial page savaging independent counsel Ken Starr in a February 2, 1999 editorial: “Mr. Starr is already regarded by his critics as an obsessive personality. Now he seems determined to write himself into the history books as a narcissistic legal crank....The Senate needs to find a way to slap Mr. Starr back into line.”

As the House was in the midst of impeachment proceedings against Bill Clinton, with a vote looming on the articles of impeachment, the Times considered impeachment far from a solemn duty. In that case, public opinion was the driver, not a regrettable barrier (the public was on Clinton’s side): “Polls Aside, G.O.P. Stance on Impeachment Hardens.”

A later story on Starr weighing whether to ask a grand jury to indict Clinton also gave impeachment the thumbs down: “....polls show that most Americans view Mr. Starr as an overzealous prosecutor who has pursued Mr. Clinton, both in criminal court and in his impeachment referral to the House of Representatives in September.”