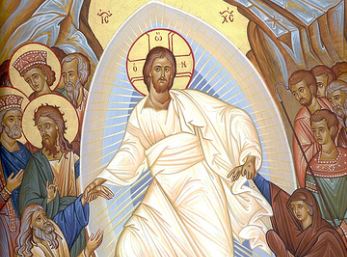 New York Times columnist Nicholas Kristof spent yet another Easter Sunday trying to see just how little one can believe of Christianity’s anchoring ideas, and still consider oneself a Christian.

Kristof refers to these regular interviews with theological figures as “my occasional series of conversations about Christianity.” All have the same theme -- seeing if one can get away with calling oneself a Christian if you don’t actually buy that whole virgin birth and Resurrection mythology. Fortunately for him, this year’s interviewee was on Kristof’s wavelength.

This year he talked with Serene Jones, Protestant minister and president of Union Theological Seminary for “Reverend, the Virgin Birth is ‘a Bizarre Claim’?" Kristof led off: “Happy Easter, Reverend Jones! To start, do you think of Easter as a literal flesh-and-blood resurrection? I have problems with that.”

Rev. Jones actually agreed: “When you look in the Gospels, the stories are all over the place. There’s no resurrection story in Mark, just an empty tomb. Those who claim to know whether or not it happened are kidding themselves..."

After getting a bonus question in by bringing up the Virgin Birth, Kristof laid out his show-stopper:

I’ve asked this of other interviewees in this religion series: For someone like myself who is drawn to Jesus’ teaching but doesn’t believe in the virgin birth or the physical resurrection, what am I? Am I a Christian?

Jones gave him an answer he was likely pleased to hear: “Well, you sound an awful lot like me, and I’m a Christian minister.”

Kristof hardly ever misses a Christmas or Easter holiday without asking, gee, do you really need to believe that Jesus returned from the dead to be a Christian? In previous years, Kristof would at least talk to more conservative Christian figures who would push back on his claims, while Jones nodded along with his theological incoherence. Here’s a recent rundown of Kristof’s religious holiday interviews:

Christmas 2016: “Am I a Christian, Pastor Timothy Keller?” He actually asked Keller, “Since this is the Christmas season, let’s start with the virgin birth. Is that an essential belief, or can I mix and match?”