NY Times Turns on Assange: From 'The Gift of Information' to 'Dubious Judgment' Post-Trump 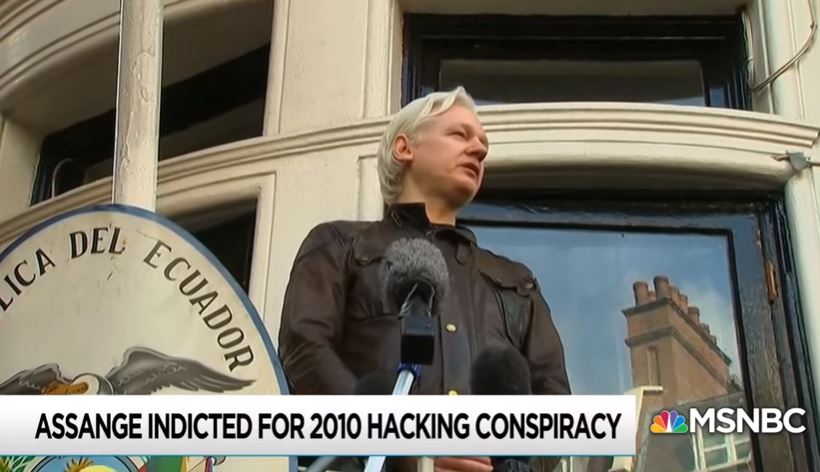 WikiLeaks founder Julian Assange had spent the last seven years holed up in the Ecuadorian Embassy in London, evading the authorities before being expelled and arrested Thursday, charged with a single count of hacking. The front page of Friday’s New York Times featured intelligence reporter Scott Shane and Steven Erlanger’s recap of Assange and the effect of his leaking of classified national security information (and Democratic Party secrets) in “A Divisive Prophet of the Public’s Right to Know.”

The paper noticed that the tide of sophisticated opinion, once favorable to the truth-activist Assange, turned in 2016, when Assange’s actions started hurting Democrats and helping the hated Donald Trump. But Shane and Erlanger didn’t make an issue of the glaring political hypocrisy on display or mention the strange new disgust toward Assange coming from the Democratic left.

The shaky video clips of Julian Assange’s arrest flashed around the world on Thursday, the white-bearded prophet of the age of leaks being hauled by unsmiling security officers to a gray van marked Police.

It was also the latest -- and surely not the last -- dramatic turn in a career marked by both brilliant achievement and dubious judgment.

“Dubious judgment” that the New York Times fully embraced in 2010-11.

His creation of WikiLeaks helped empower a generation of whistle-blowers and disgruntled insiders who could operate on an industrial scale, providing disclosures by the terabyte and enraging the powerful in many countries. WikiLeaks collaborated closely with major world publications, including The New York Times, in the release of secret records on the American-led wars in Afghanistan and Iraq and a quarter-million confidential State Department cables.

He has proved a highly problematic, even embarrassing champion for the principles of press freedom and the public’s right to information, especially in recent years.

Of course, in those “recent years” Assange's targeting had focused on information stolen from vulnerable Democratic National Committee servers. Shane and Erlanger’s sudden tone of judgementalism coincided with damage done to the Hillary Clinton campaign.

In 2016, some of Mr. Assange’s former American sympathizers turned sharply against him after he made WikiLeaks into an enthusiastic instrument of Russia’s intervention in the American presidential election, doling out hacked Democratic emails to maximize their political effect, campaigning against Hillary Clinton on Twitter and promoting a false cover story about the source of the leaks.

In 2010 and 2011 the Times ran with WikiLeaks data stolen from the U.S. government, publishing batches from the archive of secret government data, including secret and sensitive embassy cables.Then-Executive Editor Bill Keller's proudly defended his paper's participation in Assange's attempt to undermine confidence in the United States, in an 8,000-word New York Times Magazine cover story, while a Christmas edition of the paper’s style magazine T called Assange’s classified document dump (ugh) “The Gift of Information.”