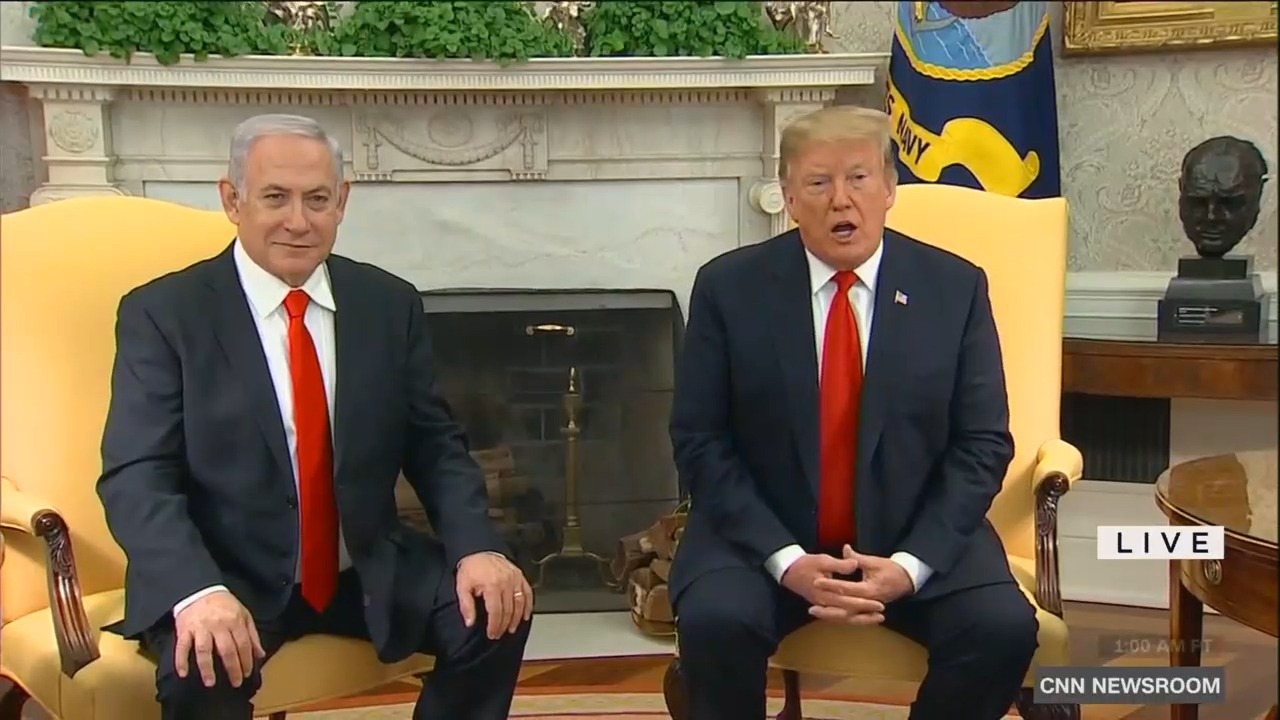 The Israeli elections are looming Tuesday, and conservative Prime Minister Benjamin Netanyahu and former army chief, Benny Gantz, are running a close race. In the runup, the New York Times piled on its usual anti-Israel and specifically anti- Netanyahu hostility over the weekend and Monday.

Monday’s front page featured David Halbfinger, the paper’s Jerusalem bureau chief, portraying Netanyahu, who is supported by Trump and derided by many Democrats running in 2020, as ruthless and desperate: “Netanyahu’s Vow Vaults West Bank Onto the Ballot – Extending Israeli Grip – Fighting for Re-election, Premier Lunges Away From 2-State Plan.”

As Israelis get ready to go to the polls on Tuesday, a stark, fateful and long-deferred choice has suddenly reappeared to confront them after Prime Minister Benjamin Netanyahu’s unexpected promise to begin extending sovereignty over the West Bank if he is re-elected.

Do voters want to make permanent their country’s control over the West Bank and its 2.6 million Palestinian inhabitants? Or do they want to keep alive the possibility that a Palestinian state could be carved out there one day?

That question has been made newly urgent by Mr. Netanyahu, who is facing a career-threatening challenge from a unified centrist party headed by a team of former army chiefs. His shocking announcement about Israeli sovereignty in the West Bank appeared to be a last-ditch effort to rally his right-wing base and stay in power.

Two-state proponents, while conceding that there is no way to know for sure how the Palestinians would react, say a sovereignty push would almost certainly lead to a nightmare of one kind or another for Israel, like a rise in violence and international condemnation.

What does Israel do that doesn’t invite “international condemnation”?

Saturday night, under intense pressure in a neck-and-neck contest with a centrist former army chief, Benny Gantz, Mr. Netanyahu gave in. Lunging further to his political right, he declared on national television that he would indeed begin to “apply sovereignty” in the West Bank.

In Sunday’s Times, Halbfinger lamented “The Color and Chaos of Israel’s Election -- One of the country’s most consequential races has also been one of its shallowest.” (Perhaps because Netanyahu’s prospects may have improved in the closing days?). Halbfinger’s closing paragraph began:

Most Israelis prefer their leaders to be rapacious alpha dogs, said Mitchell Barak, an American-born pollster who once worked for Mr. Netanyahu....

A nasty slam on Netanyahu, who has the bad taste to have good relations with President Trump, even made it into a story ostensibly about anti-Semitism by Patrick Kingsley on Friday.

Mr. Netanyahu and Mr. Orban share an approach to domestic politics: an antipathy for liberal voices, a discomfort with Muslim minorities and a willingness to work with the far-right.

Like Mr. Orban in Hungary, Mr. Netanyahu has introduced legislation that targets civil society organizations that receive significant funding from overseas. His government has forbidden non-Jews to exercise the right to self-determination, and removed Arabic as an official Israeli language.

This is total nonsense. The Times itself has been going crazy investigating supposed Russian influence on the American election....What is “liberal” about foreign governments funding advocacy organizations in Israel that advance illiberal goals such as dividing the capital of the Jewish state or making it impossible for Jews to live in parts of their historic homeland? In any case, Netanyahu hasn’t “targeted” these groups or merely “introduced” legislation; such a law, simply requiring disclosure, was actually passed in 2016. For the Times to describe them as “civil society” rather than advocacy groups is to take a partisan side in this policy issue....

In Saturday’s paper, reporter Isabel Kershner piled on hostile label in “A Far-Right, Pro-Marijuana Libertarian Shakes Up Israel’s Election Season.” Kershner seemed alarmed that a libertarian message is making headway among the young in a country with a heavily regulated economy.

The surprise candidate shaking up the last days of the campaign before Israelis head to the polls on Tuesday is a far-right nationalist libertarian who advocates small government, legalizing marijuana and a free-market economy.

While the pro-marijuana stance has received some notice, it is his economic message that is resonating with young voters who are fed up with Israel’s same-old politics and exorbitant cost of living.

His political agenda tends toward an extreme nationalism that critics call dangerous: He advocates a one-state solution to the Israeli-Palestinian conflict (that would be one Jewish state) and the takeover by Israel’s rabbinical authorities of Jerusalem’s most contested holy site -- the sacred compound revered by Jews as the Temple Mount and by Muslims as the Noble Sanctuary....Critics view his agenda as a crazy hodgepodge of ideas bordering on the anarchic and Messianic.

Roger Cohen’s oversized column Monday, “Will the Israeli ‘King’ Be Recrowned?” featured this text box: “A Netanyahu win would hurt democracy and bury hope for a two-state peace.” The online subhead included a full-throated endorsement for Netanyahu’s opponent: “It's time for Benny Gantz.”