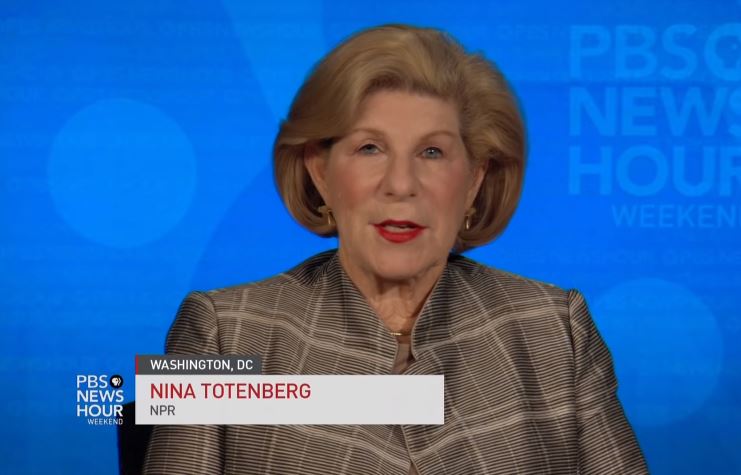 The NPR member station, which serves New York state from the campus of SUNY-Oswego, posted on Friday some transcribed highlights from Reeher’s half-hour interview with Totenberg, whose liberal bona fides are well-established on NewsBusters.

Totenberg feared the day when “the Democratic Party will become pulled to the left as severely as the Republican Party has been pulled to the right,” as if that hadn’t already happened.

Host Reeher was blunt when it came to questioning Totenberg on Brett Kavanaugh:

You mentioned being one of the only women. I have a set of questions that kind of tie to that in a particular way, and they’re about the Kavanaugh hearings....You got to see up close all of the players involved. Do you think Justice Kavanaugh was guilty of sexual assault?

Totenberg dodged that question, but eventually worked in criticism of Kavanaugh’s response to the unsubstantiated allegations.

I don’t know the answer to that....I, for me and for many of the people I know who covered those hearings, the more serious aspect of them was something he tried to walk back afterwards. And that was his very political reaction to it, his attack on the Clintons, that this was the revenge of the Clintons and manufactured to destroy him....

Reeher prodded: I presume he was coached, right?

Totenberg explained the differences between Kavanaugh and Anita Hill's sexual harassment charges against Clarence Thomas (her 1991 reporting during the Thomas hearings was instrumental in trying to bring down Thomas).

No. It was hard because I don’t like this to happen to anybody, either way. And there’s really no way in a story like this, at least with the Anita Hill story, there were corroborative witness, contemporaneous corroborative witnesses. That really wasn’t so with Christine Blasey Ford, and so, you were essentially, I think, operating on your gut. And I think a lot of women were disappointed that it was, in some sense, a replay of the Thomas/Hill hearings, that somebody testifies believably, and then, the difference is, this time, they didn’t pillory her. They said, “Well, we find you a very proper and believable witness, but we’re going to vote for Judge Kavanaugh’s confirmation anyway.”....

Totenberg praised retired Justice Anthony Kennedy, a Catholic, for supporting abortion rights, while warning that Roe v. Wade was in danger thanks to the “very different kind of conservative” in the current majority on the Supreme Court, including Kennedy’s replacement, Justice Kavanaugh.

.... I don’t know how Kavanaugh’s going to vote on these questions, but I think it’s reasonable to expect that there are five justices on the Supreme Court who are, as a group, more conservative than any group that I’ve covered in the 40 plus years that I’ve covered the court. And they’re a very different kind of conservative. And if they don’t reverse Roe v. Wade, they certainly, I think, will make it, for all practical purposes, inoperative in states where there is a political hostility toward abortion rights. It won’t matter in New York; it will matter in Alabama.

Reeher brought up the question of liberal bias.

You mentioned earlier in our conversation that NPR had largely been spared from the accusation of fake news, but there’s a different kind of accusation that has not been spared, and that’s the criticism for having a political bias. And in NPR’s case, that’s usually a liberal bias that’s being asserted. And some people have even criticized your reporting on those grounds in the past. Do you think the criticism of NPR has merit at all?

Totenberg, to no one’s surprise, didn’t see any, while seemingly apologizing to liberals in the audience for daring to equate MSNBC host Rachel Maddow with FOX News host Sean Hannity.

Not much. I think certainly you can argue with the choice of stories that sometimes are on the air. Maybe you think there are too many transgender stories, for example. But I think that the skill with which we report stories is based on the old-fashioned notion of nobody can be perfectly objective, but trying to be objective and, most of all, being fair. There are rules for doing this, old-fashioned rules. Now, there’re places where those roles are not operative much, and that would be very liberal networks or very conservative networks, Fox or MSNBC. You look at anybody from Hannity to Rachel Maddow, and don’t yell at me -- I’m not equating them – I’m just saying that this is their business model, to appeal to, on one side, conservatives, and on the other side, liberals....

Totenberg brought down Reagan's nomination of Douglas Ginsburg, tried to bring down Clarence Thomas, and often promotes her buddy Ruth Bader Ginsburg at public events. So she doesn't appear liberal?