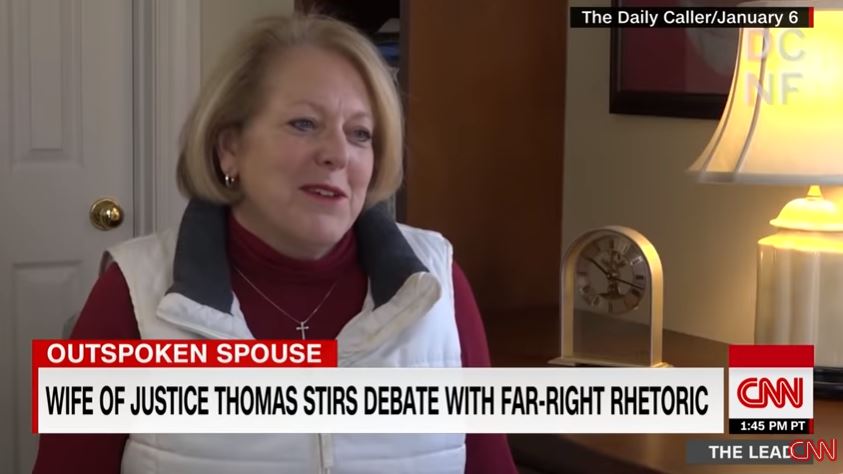 President Trump met last week with a delegation of hard-right activists led by Ginni Thomas, the wife of Justice Clarence Thomas, listening quietly as members of the group denounced transgender people and women serving in the military, according to three people with direct knowledge of the events.

Why, they're so far out, even Trump was "taken aback"!

For 60 minutes Mr. Trump sat, saying little but appearing taken aback, the three people said, as the group also accused White House aides of blocking Trump supporters from getting jobs in the administration.

The paper proved itself hypersensitive to supposed conflicts of interest among conservatives, though one wonders if reporters would be as aggrieved if a spouse of a liberal Justice met with a President Obama.

It is unusual for the spouse of a sitting Supreme Court justice to have such a meeting with a president, and some close to Mr. Trump said it was inappropriate for Ms. Thomas to have asked to meet with the head of a different branch of government.

From their mouths to the Sunday edition of the Times...

A vocal conservative, Ms. Thomas has long been close to what had been the Republican Party’s fringes, and extremely outspoken against Democrats. Her activism has raised concerns of conflicts of interest for her husband, who is perhaps the most conservative member of the Supreme Court.

During the meeting last Thursday in the Roosevelt Room, which was attended by about a half-dozen White House aides, one woman argued that women should not serve in the military because they had less muscle mass and lung capacity than men did, according to those familiar with the events. At another point, someone said that gay marriage, which the Supreme Court determined in 2015 was the law of the land, was harming the fabric of the United States. And another attendee was dismissive that sexual assault is pervasive in the military.

Others attending included Frank Gaffney, the founder of the Center for Security Policy who has advocated curtailing immigration and has repeatedly denounced Muslims, and Rosemary Jenks, who works for the anti-immigration group NumbersUSA, according to the people familiar with the events.

Ms. Thomas, who was said to have opened the meeting by informing the assembled White House staff members that she feared being open because she did not trust the people there, has long been more conservative than her husband, and has often provoked controversy.

In 2011 she formed a government affairs firm called Liberty Consulting, which drew criticism for boasting on its website that Ms. Thomas would use her “experience and connections” to help clients.

More recently, she hired as an assistant a woman fired by the conservative group Turning Point USA for texting a colleague a year earlier that “I HATE BLACK PEOPLE.” The woman, Crystal Clanton, was on the list of people Ms. Thomas’s group asked to have attend the meeting, the people familiar with the sit-down said.

She has also drawn criticism for sharing social media posts promoting conspiracy theories, including one suggesting that the billionaire philanthropist George Soros was working against Mr. Trump and that Democrats had committed voter fraud during last year’s midterm elections. Shortly before the elections, Ms. Thomas also shared a misleading post about the caravan of migrants traveling toward the United States.

The paper didn’t offer any further details about those “conspiracy theories,” but on the face of it there’s nothing particularly striking or shocking to suggest that left-wing Soros is working to help Democrats, or the possibility of pro-Democratic voter fraud.