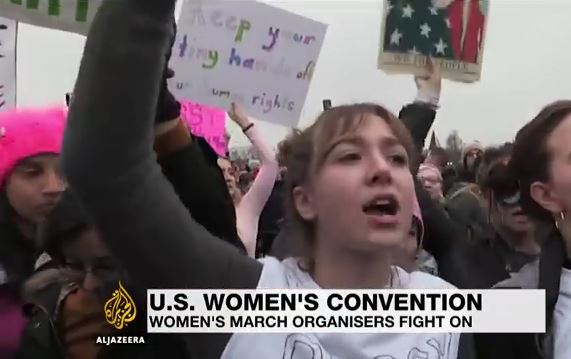 Davey managed not to notice the monolithic left-wing ideological component of the convention, featuring groups heavily funded by left-wing billionaire donor George Soros. There was not a single “left-wing” or even “liberal” label in a story about a convention featuring Rep. Maxine Waters and Muslim “feminist” Linda Sarsour, as well as the sponsors Planned Parenthood, MoveOn.org and the ACLU.

Davey quoted Waters and Sarsour, but skipped the more radical and embarrassing moments from Waters and Sarsour, who made a disgusting Twitter attack on two critics of radical Islam, Ayaan Hirsi Ali and Brigitte Gabriel, in 2011: “Brigitte Gabriel= Ayaan Hirsi Ali. Shes asking 4 an a$$ whippin. I wish I could take their vaginas away -- they dont deserve to be women.” (Hirsi Ali is a victim of female genital mutilation, making Sarsour’s attack even more personal and vile).

Nearly everyone here had a story about where they were in January, the day after President Trump was inaugurated. Some packed into the streets of Washington, in a defiant demonstration against the new leadership and what it would mean for women. Others recalled marching beside grandmothers and daughters in Los Angeles; New York; Tulsa, Okla.; Ann Arbor, Mich.; and elsewhere.

Nine months after the Women’s March, about 4,000 people, mostly women, gathered in Detroit this weekend for the Women’s Convention, which was seen as an extension -- and also a test -- of the movement that grew out of those marches.

In the halls of this convention, which at times had the mood of a raucous campaign rally, women were tackling a broad and sprawling list of issues, including Republican efforts to repeal the Affordable Care Act, threats to the environment, mass incarceration, reproductive rights, workplace rules, the accessibility of child care, treatment of immigrants, protections for transgender people and more.

Davey at least gave a brief taste of how radical this gathering was, to the point of booing due process.

....Women shared personal stories and urged one another to speak out, and they booed mentions of Betsy DeVos, the education secretary, who rescinded Obama-era guidelines on campus sexual assault.

After pretending this was some wide-ranging colloquy, Davey conceded that anti-Trump activism united everyone present.

Yet for all the disparate topics at this meeting, one thread ran through them all: opposition to the Trump administration and a pointed focus on elections next year. In small rooms, speakers led detailed training sessions for candidates at all levels: how to get the vote out, how to give a campaign speech, how to register voters, how to run for office.

Davey tried to mainstream the group of liberals best she could.

....Organizers said more than 5,600 such meetings had occurred, and pointed to the turnout at the weekend convention, as well as the number of potential female candidates, as more evidence that a sustained movement had emerged....The convention, held in the vast downtown Cobo Center and titled “Reclaiming Our Time” (a play on remarks by Ms. Waters at a House committee meeting), drew a wide range of women: old and young, and of different races, ethnicities, religious backgrounds and hometowns.....

Before the weekend began, critics complained that Mr. Sanders, an independent from Vermont, ought not to be offered a high-profile speaking slot, given that it was a convention for and about women. The debate created a split among some here, creating tension during some events; panelists on one stage noted that some convention participants had threatened on social media.

The local Detroit Free Press included a few nuggets skipped by the Times that show how far off the deep end things got among both event speakers and attendees.