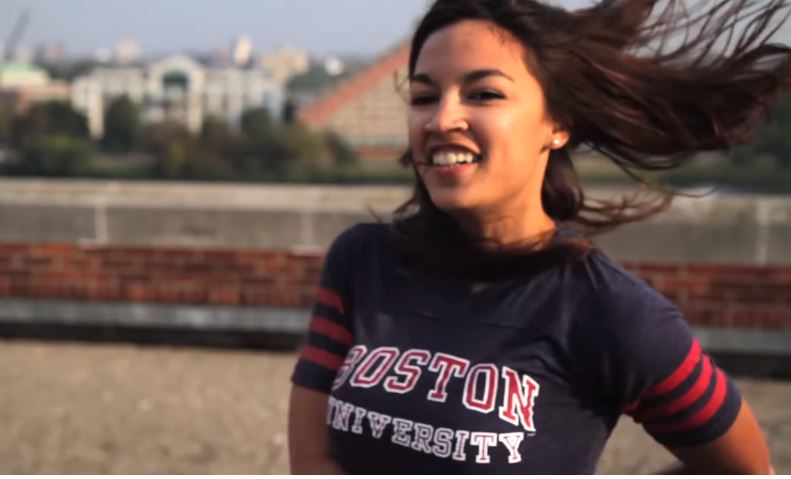 New Rep. Alexandria Ocasio-Cortez, the democratic socialist and media hit, did a Breakfast Club movie-style dance while in college several years ago, an edited version of which hit social media. Newsweek’s Jason Le Miere squeezed two misleading articles out of the media-driven spat, furthering with blissful ignorance the media myth that Republicans are somehow offended or outraged by her dancing, while never actually naming a single outraged conservative. The first was Thursday's "Conservatives Mock Alexandria Ocasio-Cortez for College Dancing Video, Everyone Else Thinks It’s Adorable.”

Actually, no one has a problem with it, and many conservatives are actually defending it and wondering what the fuss is about. That hasn’t stopped the media from making up offended conservatives. An edited clip of the original Breakfast Club homage video was instigated by an obscure Twitter account that has now been deleted.

Le Miere did his best to portray Ocasio-Cortez as a victim of conservative mockery.

Alexandria Ocasio-Cortez has been a target for conservatives ever since the democratic socialist stunned American politics by upsetting longtime Democratic Congressman Joe Crowley in her U.S. House Democratic primary last June. The Bronx native has seen everything from her fashion choices to her bank account scrutinized. Now her dancing has joined that growing list.

He fudged the timeline, when in fact everyone got the video from the same obscure Twitter source.

Shortly before the 29-year-old became the youngest congressman ever sworn in to office, several conservative Twitter feeds shared a video of her dancing on a rooftop. The video, featuring her dancing to Phoenix’s “Lisztomania” in an apparent homage to The Breakfast Club, appeared to be taken from Ocasio-Cortez's time at Boston University.

He treated the initial tweeter as just one of several who spread the video.

One Twitter user, whose handle referenced the QAnon conspiracy theory popular among supporters of President Donald Trump, tweeted the video with the accompanying insult: “Here is “America’s favorite commie know-it-all acting like the clueless nitwit she is...High School video of “Sandy” Ocasio-Cortez.”

It's fair to say that most people, though, did not share that reaction to a young Ocasio-Cortez exuberant dance.

“Oh look! @AOC acted like a typical high-school teenager when she was a teen-ager in high-school. Clutch your pearls, everyone,” wrote CNN pundit Ana Navarro. “Surely folks obsessed with Ocasio-Cortez know only thing accomplished with constant attacks on her, is making her star rise higher. This is stupid.”

“The reason journos from @FoxNews to @dcexaminer can’t help but obsess about my clothes, rent, or mischaracterize respectful convos as “fights” is bc as I’ve said, women like me aren’t supposed to run for office -- or win & that’s exactly why the BX and Queens sent me here,” she tweeted in November in response to suggestions from conservative outlets that her clothes were too expensive for someone who has said she has struggled financially.

Le Miere’s audacious follow-up Friday added the congresswoman’s response (you could even say she shrewdly “pounced” on the non-existent controversy to go after Republicans): “Alexandria Ocasio-Cortez on Dancing Video Reaction: ‘Unsurprising Republicans Would Think Having Fun Should Be Disqualifying or Illegal.’”

Alexandria Ocasio-Cortez responded to a viral video of her dancing in college that critics attempted to use as the latest weapon against the newly elected congresswoman, saying it was "unsurprising” Republicans would have an issue with it.

"It is unsurprising to me that Republicans would think having fun should be disqualifying or illegal,” she told The Hill’s Olivia Beavers on Friday.

Ocasio-Cortez also echoed a sentiment expressed by many on social media.

A number of conservative accounts shared the video of Ocasio-Cortez dancing to Phoenix’s “Lisztomania” in an apparent homage to The Breakfast Club from her time at Boston University. One of the initial tweets of the video referred to it as “America’s favorite commie know-it-all acting like the clueless nitwit.”

“One of the initial tweets of the video”? It’s the sole reason anyone is talking about it.

But the effort to discredit the 29-year-old, who became the youngest congresswoman ever after being sworn in on Thursday, appeared to backfire spectacularly. The overwhelming reaction online to the video was a positive one, with observers referring to it as “adorable” and mocking the “clutch-your-pearls” reaction from some on the right.

Who, exactly, on the right? Again, not a single actual conservative has been named, pearl-clutching or otherwise. Le Miere can only quote the single tweet from the now-deleted account.