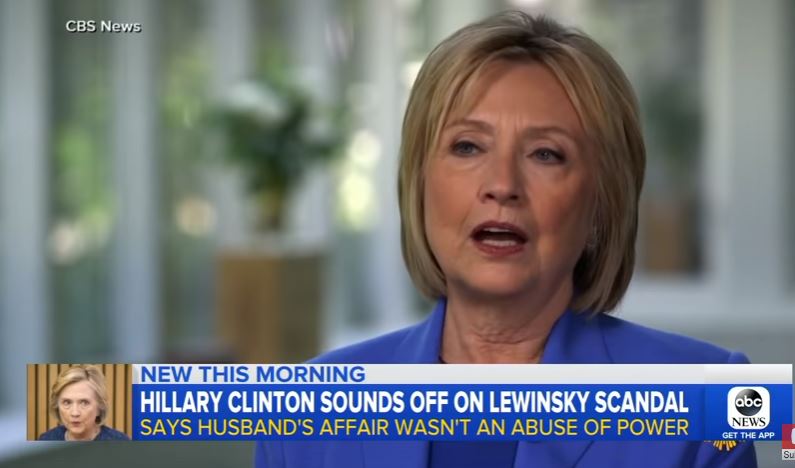 Cottle actually mentioned respectfully the case of Juanita Broaddick, who credibly accused (to coin a phrase) then-Arkansas attorney general Bill Clinton of raping her in a hotel room in 1978.

Some of Cottle’s concern is purely political -- she fears dredging up old Clinton family sandals may muddle the waters for Democrats going into the November elections.

Hillary Clinton has been on a bit of a media tear the past few weeks, holding forth on both the personal and the political -- and making clear that someone needs to perform an intervention before she further complicates life for her fellow Democrats.

....They do not need to be talking about impeachment, or about the results of Senator Elizabeth Warren’s DNA testing. And they definitely do not need to get distracted by unnecessary drama generated by comments from one of the party’s most iconic, and most controversial, figures.

And yet, there was Mrs. Clinton, in an Oct. 9 interview with CNN, sharing her take on the need for Democrats to -- as Michelle Obama might have put it -- go low with today’s Republicans. As Mrs. Clinton sees it, “You cannot be civil with a political party that wants to destroy what you stand for, what you care about.”

Unfortunately, it took Mrs. Clinton less than a week to come up with an even juicier midterm gift for Trump & Company. In a sit-down with “CBS Sunday Morning,” she was asked several pointed questions about her husband’s Oval Office dalliance with Monica Lewinsky.

....her reaction was to point out that Ms. Lewinsky had been an adult at the time of the affair .... Mrs. Clinton then pivoted to demand why no one was investigating the myriad accusations of sexual harassment and assault against the current occupant of the White House.

It’s one thing for a wife to stand by her spouse, especially when both have long been the targets of partisan warriors dead-set on destroying them. But it is no secret that Mr. Clinton’s response to sexual scandal was to try to trash the reputations of the women involved. And while the degree to which Mrs. Clinton joined in such efforts may remain in dispute -- in the CBS interview, she denies having played any role -- her fundamental complicity is beyond reasonable doubt.

This is the sort of moral arrogance and self-justification that has long troubled even many Democrats about Mrs. Clinton....

It’s quite a turnaround from the official editorial voice of the paper. In January 2016, as the presidential race was shaping up, the editorial board was bluntly dismissive of Clinton's behavior, sniffing “Mr. Trump is way out of line bringing up Mr. Clinton’s philandering. That behavior, especially his White House affair with a 22-year-old intern, is a blot on his career. It is also a tired subject that few Americans want to hear more about.”

(This was clearly before #MeToo “woke” the media up and when even a few media liberals began questioning their past downplaying of Clinton’s sexual offenses).

It’s only the third time the paper has even mentioned Broaddrick in an editorial (one of those was in passing) according to a nytimes.com search. The first and evidently last editorial devoted to her allegations came out in 1999 after they were first reported on Dateline NBC.