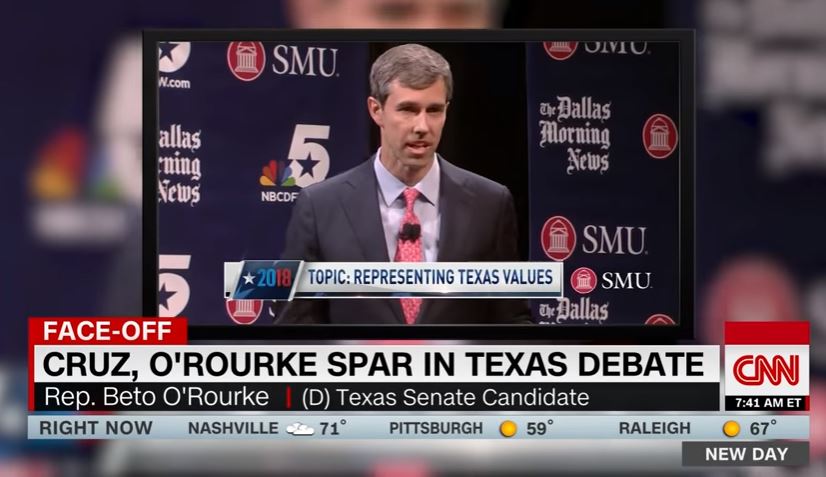 The New York Times is still leading the cheers for Democrat Beto O’Rourke in his quest to unseat Texas Sen. Ted Cruz in November.

It opened on someone’s mild idea of “rebellion.”

After church on a recent Sunday, Emily Mooney smiled as she told her girlfriends about her public act of rebellion. She had slapped a “Beto for Senate’’ sticker on her S.U.V. and driven it to her family’s evangelical church.

But then, across the parking lot, deep in conservative, Bible-belt Texas, she spotted a sign of support: the same exact sticker endorsing Beto O’Rourke, the Democrat who is challenging Senator Ted Cruz.

Listening to Ms. Mooney’s story, the four other evangelical moms standing around a kitchen island began to buzz with excitement. All of them go to similarly conservative churches in Dallas. All are longtime Republican voters, solely because they oppose abortion rights. Only one broke ranks to vote for Hillary Clinton in 2016. But this November, they have all decided to vote for Mr. O’Rourke, the Democratic upstart who is on the front line of trying to upend politics in deep-red Texas.

The women, who are all in their 30s, described Mr. O’Rourke as providing a stark moral contrast to Mr. Trump, whose policies and behavior they see as fundamentally anti-Christian, especially separating immigrant children from their parents at the border, banning many Muslim refugees and disrespecting women.

Not for the first time, Dias works to wave Republicans off the pro-life issue.

“I care as much about babies at the border as I do about babies in the womb,” said Tess Clarke, one of Ms. Mooney’s friends, confessing that she was “mortified” at how she used to vote, because she had only considered abortion policy. “We’ve been asleep. Now, we’ve woke up.”

In case they somehow didn’t get the point, Dias again reminded readers that Texas is pretty conservative:

It’s far from clear how much influence voters like Ms. Clarke and her friends will have in the Senate race. Texas remains a deeply conservative state....

....Ms. Mooney and her friends may represent an under-the-radar web of white, evangelical women in Texas whose vote in November may be more up for grabs than at any time in the recent past. They are angry with many of Mr. Trump’s policies, and frustrated because they feel their faith has been weaponized to support his agenda.

A photo credit gushed: “Sarah Bailey said that after a lifetime of listening to what her pastor told her, she felt like she could finally push back.”

At times, however, their support feels hush-hush. A few of their other friends who support Mr. O’Rourke are married to men who support Mr. Cruz and have refused to let them speak about it publicly. One friend said she wanted to protect her marriage, and worried she’d be “crucified, burned at the stake” if people found out, Ms. Clarke said.

The Times has no hesitation to make theological assumptions, when it suits its political aim.

These evangelical women may seem invisible, Ms. Hatmaker said, but they dot the state, and reflect a broader dissatisfaction among some Christian conservatives that their faith has been politicized for what they see as an agenda that opposes what Jesus represents.

Some evangelical pastors around the country have felt torn about Mr. Trump since his rise; many support Republican stances on issues like abortion and Israel, but are repelled by the racism and sexism they see in his policies. In Texas, since the 2016 election, black worshipers have been leaving white churches, and some white evangelical women have tiptoed away from Mr. Trump.