NY Times Books Ask the Vital Question: 'What if Masculinity Were Literally Toxic?' 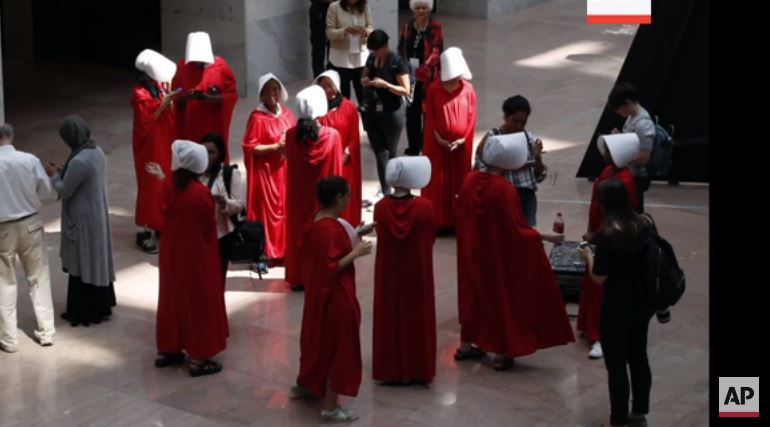 Thanks to President Trump’s attacks on women’s rights America’s, women are just a few weeks away from mandatory Handmaid’s Tale uniforms, judging by this ominous overview of recent novels in the genre.

On a desolate island, three sisters have been raised in isolation, sequestered from an outbreak that’s causing women to fall ill. To protect themselves from toxins, which men can transmit to women, the sisters undergo cleansing rituals that include simulating drowning, drinking salt water and exposing themselves to extreme heat and cold. Above all, they are taught to avoid contact with men.

That’s the chilling premise of Sophie Mackintosh’s unsettling debut novel The Water Cure, a story that feels both futuristic and like an eerily familiar fable. It grew out of a simple, sinister question: What if masculinity were literally toxic?

The Water Cure, which comes out in the United States in January and was longlisted for the Man Booker Prize, joins a growing wave of female-centered dystopian fiction, futuristic works that raise uncomfortable questions about pervasive gender inequality, misogyny and violence against women, the erosion of reproductive rights and the extreme consequences of institutionalized sexism.

This new canon of feminist dystopian literature -- which includes works by up-and-coming novelists like Ms. Mackintosh, Naomi Alderman, Leni Zumas and Idra Novey, as well as books by celebrated veterans like Louise Erdrich and Joyce Carol Oates -- reflects a growing preoccupation among writers with the tenuous status of women’s rights, and the ambient fear that progress toward equality between the sexes has stalled or may be reversed.

Canadian writer Margaret Atwood and her 1985 novel The Handmaid’s Tale, the founding document for the current feminist dystopian movement, gets respectfully cited as foreshadowing a real-life threat to women’s rights.

Lately, Ms. Atwood’s imaginary dystopia has inspired real-life political activism, as protesters dressed as handmaids in red robes and white bonnets have gathered at state capitols around the country to oppose policies that restrict women’s access to abortion and health care. In September, a group of red-robed women protested at the United States Senate during hearings for Brett M. Kavanaugh, who was confirmed to the Supreme Court after being accused of committing sexual assault, and could potentially cast a decisive vote overturning Roe v. Wade.

“The moment that we’re in is terrifying for a lot of women, and the story that Margaret Atwood created captures that fear so incredibly well,” said Lori Lodes, an adviser for Demand Justice, a liberal advocacy group that organized the recent protests at the Senate.

Christina Dalcher’s debut novel, Vox, where women are limited to speaking 100 words a day at pain of electric shock, “was inspired in part by the women’s marches around the country after the 2016 election.”

[Louise] Erdrich began writing the book many years ago, when she was pregnant with her fourth daughter. She set it aside until shortly after the 2016 presidential election, when, with a Republican-controlled Congress and White House, liberal activists raised alarms about the potential threat to women’s reproductive rights. Ms. Erdrich began to worry about what the world would be like if the gains made decades ago through women’s liberation movements were lost.

To her credit, Alter also briefly addressed places where The Handmaid’s Tale is sadly not far from reality for women. She mentioned “China’s former one-child policy, a rule that led to sex-selection abortion of female fetuses.” Pakistani writer Bina Shah was quoted: “In patriarchy, women are always going to end up being the losers. What’s going on now in Saudi Arabia, Pakistan and Afghanistan is worse than what’s happening in The Handmaid’s Tale.”

For once, that’s not liberal exaggeration.

But then Alter returned to Handmaid’s author Atwood, described as “a sort of patron saint of feminist dystopian fiction,” to claim “There’s certainly a very concerted push toward making women’s bodies a possession of the state in the United States.”

How does protecting human life in the womb add up to ownership by the state?