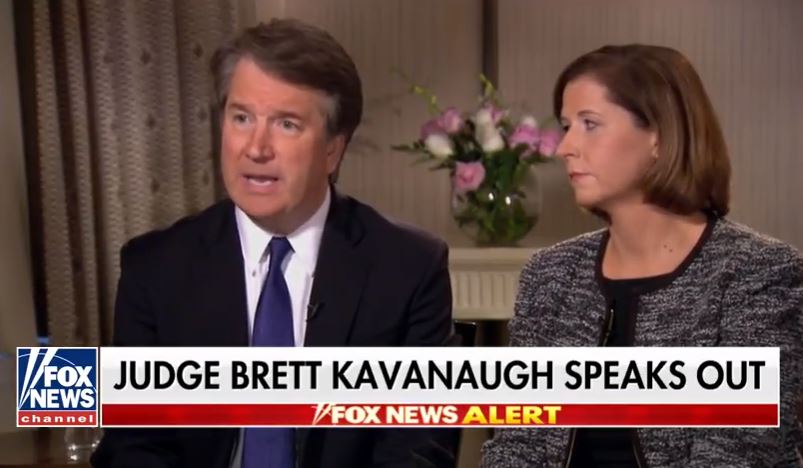 The front page of Wednesday’s New York Times swallowed whole Democratic talking points in the fast-moving barrage of allegations against Supreme Court nominee Brett Kavanaugh. The paper is moving on from the original accusation of sexual assault by Christine Blasey Ford and is now moving on to paranoid guilt by association, having fully embraced the shoddy New Yorker story regarding his latest accuser, Deborah Ramirez.

Something bad had happened to her during a night of drinking in the residence hall their freshman year, she said, and she wondered if he recalled her mentioning it at the time.

Mr. Roche, a Silicon Valley entrepreneur, said he had no knowledge of the episode that Ms. Ramirez was trying to piece together, with her memory faded by the years and clouded by that night’s alcohol use.

Days later, in a New Yorker story, Ms. Ramirez alleged that Judge Brett M. Kavanaugh, President Trump’s Supreme Court nominee, exposed himself to her at a dorm party. Mr. Roche, a former roommate of the judge, believes her account, he said, and supports her decision to speak out.

The allegation by Ms. Ramirez, also 53, stems from an incident she said occurred during the 1983-84 school year, when she and Judge Kavanaugh were freshmen.

Like most first-year students, they lived on Old Campus, a quadrangle of Gothic architecture on the Yale grounds. Their social circles included mutual friends.

The Times quickly reduced this fight over the truth to a class issue:

But she saw herself as an outsider at Yale, Mr. Roche said, where many of her classmates were wealthier and more traveled. Friends from back then described her as not particularly confident in a place full of other high school standouts. Ms. Ramirez declined to be interviewed for this article, but her lawyer, Stan Garnett, noted that “she did not come from race or class privilege or have the advantage other students had when entering the university.”

She also found herself in an alcohol-infused culture. “Her whole circle happened to be a drinking circle,” said Victoria Beach, who served as president of the student council when Ms. Ramirez was a member. Elizabeth Swisher, a Seattle physician who roomed with Ms. Ramirez for three years at Yale, recalled, “She was very innocent coming into college.” She added, “I felt an obligation early in freshman year to protect her.”

Judge Kavanaugh had attended Georgetown Preparatory, an elite Jesuit school in suburban Washington, where his parents moved in the capital’s political circles. His family was well-off, with his father a lobbyist and his mother a judge. At Yale, he seemed to settle in quickly with a crowd not unlike his high school friends.

Then came guilt by association:

On a liberal campus known for its scholarship, the DKEs stood out for their hard partying and, some women students claimed, misogyny. During Judge Kavanaugh’s time there -- 15 or so years after women arrived -- some fraternity brothers paraded around campus displaying women’s underwear they had filched, drawing criticism.

Drunken parties? At a fraternity? The devil you say.

Next came the smears with nothing to do with the accusations of sexual harassment or assault, but do make Kavanaugh sound guilty of being a college student:

Nearly a dozen people who knew him well or socialized with him said Judge Kavanaugh was a heavy drinker in college. Dr. Swisher said she saw him “very drunk” a number of times. Mr. Roche, his former freshman year roommate, described his stumbling in at all hours of the night.

In a statement, Kerri Kupec, a White House spokeswoman, played down the descriptions of Mr. Kavanaugh’s heavy drinking at Yale without disputing them....

One night, Ms. Ramirez told The New Yorker, Judge Kavanaugh exposed himself to her during a drinking game in a dorm suite.

As Mr. Trump and Republican leaders insisted that they will install Judge Kavanaugh on the Supreme Court despite the accusations, Senator Lisa Murkowski of Alaska, a crucial Republican swing vote, offered a blunt warning of her own: Do not prejudge sexual assault allegations against the nominee.

But Ms. Murkowski’s expressions of concern undercut Republican efforts to paint the accusations as a grand Democratic plot. She was always expected to be a critical vote in Judge Kavanaugh’s confirmation process. But she is making clear that she is deeply troubled by Dr. Blasey’s story.