The flattering profile of the paper’s great Texas hope raises the eternal puzzle for Democrats and their friends at the Times: When will Texas finally turn blue? 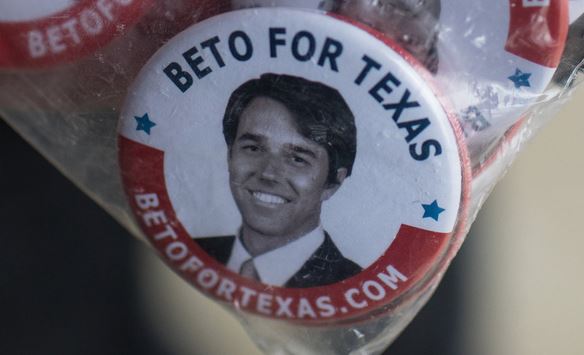 Beto O’Rourke was racing left again, insisting he knew what he was doing.

“Hydroplaning there a little bit,” he said softly, doing 75 in the passing lane through an East Texas downpour, double-fisting beef jerky in his silver pickup.

This self-assurance was understandable. In his campaign against Senator Ted Cruz, Mr. O’Rourke has been attempting the Texas equivalent of walking on water -- winning statewide as a liberal Democrat -- without yet losing his balance. There is bipartisan consensus, including from Mr. Cruz, that Mr. O’Rourke could actually prevail in November -- maybe -- if the blue wave crests just so. And now, 15 days into a 34-day road trip, Mr. O’Rourke was 50 miles from another disarmingly large crowd in a typically red county, primed to cheer his calls for brash progressivism deep in the heart of Trump country.

“This moment, this year, this time is not easy,” Mr. O’Rourke thundered once he reached the stage, by turns swearing playfully in two languages to make his case. “It’s not for the faint of heart.”

But why not try? This is Texas, he reminded them. Or it can be.

More than anything, Mr. O’Rourke has made clear that he will not modulate his politics, betting that he can energize and activate nonvoters from past years, particularly younger ones, with left-wing authenticity and genial hustle. It is a model being pursued by progressives across the country, often with considerable success....

Mr. O’Rourke has defined the philosophy with a line borrowed from Jim Hightower, a prominent activist and commentator who was once Texas agriculture commissioner: “The only thing you’ll find in the middle of the road,” Mr. O’Rourke said in Houston recently, “are yellow lines and dead armadillos.”

The reporter (and photographer) were delighted to find the cliché come true:

Later that day, after a bit more driving, there it was, between a shuttered general store and a giant roadside cross: a dead armadillo, hugging the yellow line.

If proved true, Mr. O’Rourke’s theory of the case, as much as any strategic gamble in these midterms, would have the effect of reshaping his state’s very political identity. In the short run, voter enthusiasm for Mr. O’Rourke is expected to boost Democratic congressional candidates this fall in districts in and around the state’s largest cities, where Mr. O’Rourke’s popularity can help down-ballot even if he loses his own race....

Flegenheimer also tried to show Republican Sen. Ted Cruz as awkward and tongue-tied, though not as obviously as he has previously tried. He did get in a nasty dig about global warming skeptics.

Oil fortunes have spiked and receded -- from $30 a barrel, to $140, to points in between -- as technology jobs have flooded in. Hurricane storm-waters have pooled high, swamping areas represented by people dubious of climate science, and taxes have stayed low.

But at the very least, Mr. O’Rourke’s efforts have helped build, or rebuild, Democratic infrastructure across the state, attracting volunteers and attention not only for his own campaign but for his peers. Some Republican-held House districts had already been targets, particularly after Mrs. Clinton carried a handful of them. These include one around Dallas, where Colin Allred, a former Obama administration official and professional football player, is challenging

A side-by-side comparison showed the tone tilted toward Democrat O’Rourke.

Mr. Cruz, whose given name is Rafael, is a Cuban immigrant’s son who speaks middling Spanish and wants to build the wall.

His opponent, whose given name is Robert, is a white man from a border city who speaks perfect Spanish with an accent impressive for an O’Rourke (and not bad for a Beto) and calls the family separation policy the moral stain of our times.