New York Times reporter Emma Fitzsimmons wrote “Outrage Over a Sting in a Poor Chicago Neighborhood" for Saturday's edition, using the story of a “bait truck” that resulted in a few arrests to play the anti-law enforcement race card. 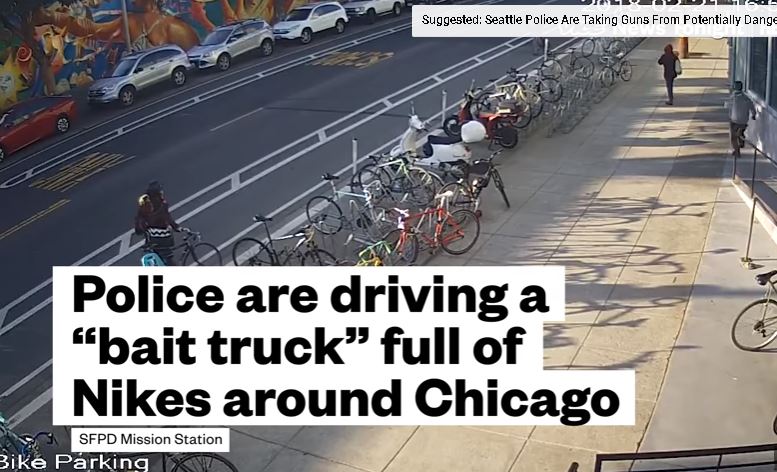 Even in a city rife with distrust of law enforcement, residents were shocked by the sting operation: A tractor-trailer filled with Nike sneakers parked in an impoverished neighborhood on the South Side.

The “bait truck” was left there earlier this month to lure would-be thieves into a trap, the authorities said. Three men were arrested on charges of stealing from the truck, prompting outrage in the community where faith in the police is already at a low point.

“Y’all are dirty,” one young man yelled at uniformed officers stationed near the truck in a video that spread quickly online. “You wouldn’t have did it in your neighborhood.”

The Chicago police, however, were playing a secondary role in the sting: “Operation Trailer Trap” was led by Norfolk Southern Railway, with officers from its own police unit, and was orchestrated on Aug. 2 and 3 after several thefts of parked and locked freight trucks and containers in the immediate area. After the tactic was roundly criticized, the railroad company apologized and promised not to do it again. Prosecutors dropped burglary charges against the men.

But the damage was done. The operation may not have been the Chicago Police Department’s idea, but it certainly bore the brunt of the backlash.

More than two weeks after the bait truck was deployed in a neighborhood where nearly all of the residents are black, resentment lingers over the episode. In a rebuke to the police, community groups plan to give away hundreds of pairs of donated shoes in the neighborhood this weekend -- an idea the Chicago rapper Vic Mensa is calling the “anti-bait truck.”

“To see the police escort a bait truck full of shoes through a low-income neighborhood where people can’t afford basic necessities, it seemed very representative of how ill-equipped they are to deal with the city’s issues,” Mr. Mensa said in an interview.

Do brand-name sneakers qualify as “basic necessities” worth breaking the law to acquire? Here's more:

Initial reports said the police left the cargo truck open and that teenagers were targeted, but railroad officials said it was locked and the men who were arrested were between the ages of 21 and 59.

“The suspects saw a parked, unmarked trailer and then proceeded to cut open the safety seal and broke into the back of the trailer and only then did they find retail shoes in unmarked brown boxes, previously secured and hidden inside,” said Susan Terpay, a spokeswoman for Norfolk Southern.

The railroad also provided video of the thefts, which shows several men inside the truck grabbing large brown boxes. Still, railroad officials apologized in a letter published in The Chicago Tribune.

Fitzsimmons skipped a telling detail: The use of a box cutter to cut through the trailer’s safety seal – hardly a sign of a “spur of the moment” act.

Eventually she made a grudging acknowledgement that such baiting isn’t new:

The idea of using expensive items to entice would-be thieves is not a new idea. In San Francisco, the police have used high-end “bait bikes” to make arrests. And a reality television show called “Bait Car” on truTV captured vehicle thefts.

But unlike the Times, liberal outlet Vox suggested it could be a useful tactic in an area where car theft is a problem, and the Chicago Tribune reported its success in the city in 2008.

Fitzsimmons wrote a story that also wrongly placed blame back in May, taking the Times’ hostility toward the massively popular Uber ride-sharing program down to a personal level, blaming it for suicides of taxi drivers.