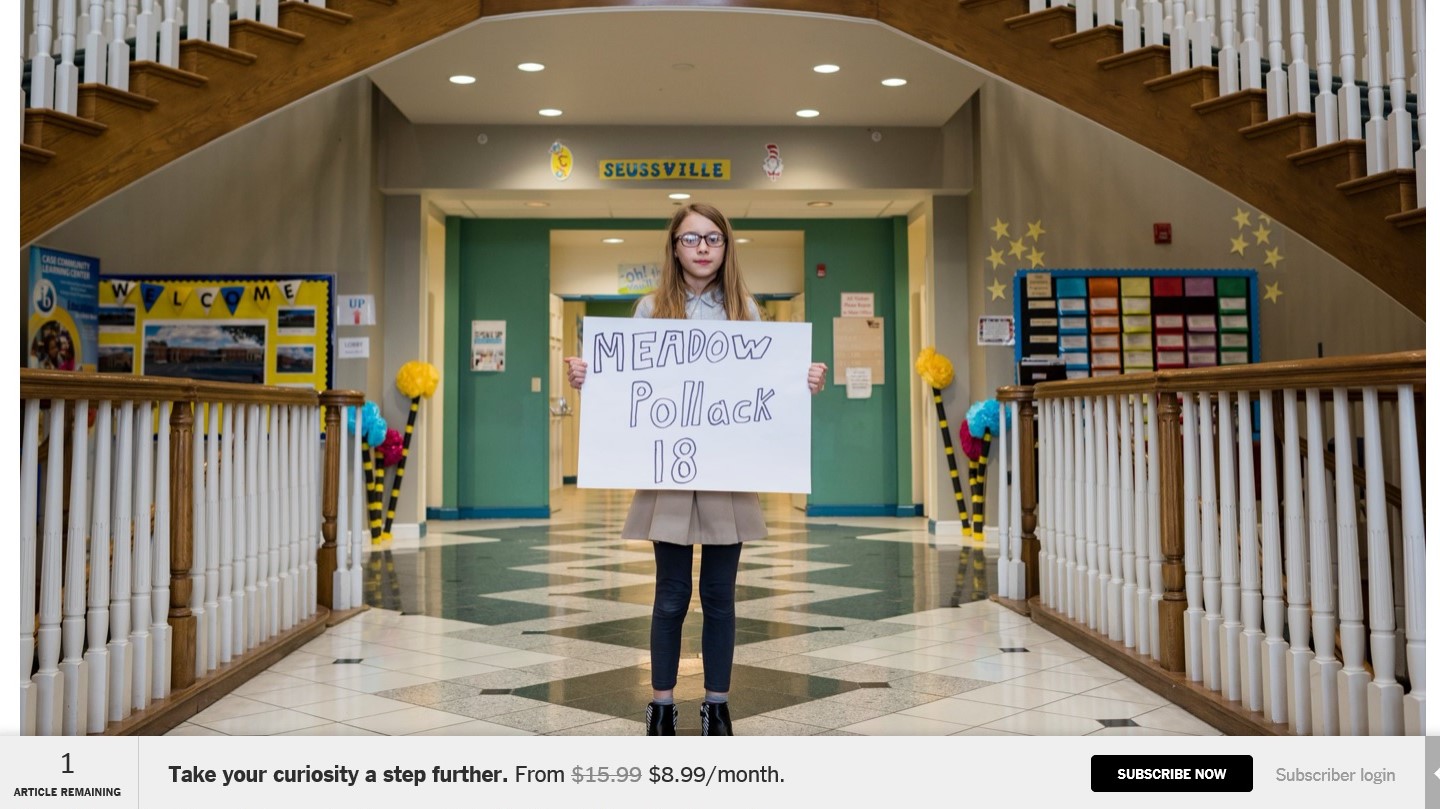 The New York Times has fully and unapologetically embraced the children’s crusade of gun control, in the aftermath of the Parkland school killings, and is now cheering on the promised nationwide school walkout today. The lead National section story for Wednesday, reported by Stephanie Saul and Anemona Hartocollis, was headlined “Too Young to Protest? 10-Year-Olds Beg to Differ – Thousands of Students Nationwide Plan to Walk Out of Class.”

It started last month as a writing exercise on the 1963 Birmingham Children’s Crusade, when more than 1,000 students skipped school and marched to demand civil rights. Then the class assignment mushroomed into a plan -- hatched by 10- and 11-year-olds -- to stage a little civil disobedience of their own.

There wasn't a hint of journalistic cynicism about kids welcoming a mid-week day off from school.

The editorial page was all in as well, with the sole editorial in Wednesday’s edition, “We Stand With the Students,” including cloying graphics of school desks and quotes from Parkland students.

Sunday’s lead National section story by Jonah Engel Bromwich was “The Social Media Warriors of Parkland – Florida Students Stake Out Twitter to Confront Politicians and Pundits on Guns.” Bromwich clearly relished the students getting one-up on Education Secretary Betsy DeVos, who is unable to engage in kind:

The secretary of education, Betsy DeVos, had only just announced that she would visit Marjory Stoneman Douglas High School when the students began to react.

“Good thing I was already planning on sleeping in tomorrow,” Emma González tweeted out to her 1.2 million followers Tuesday evening.

“Literally no one asked for this,” said her classmate, Sarah Chadwick, to an additional 269,000 followers.

And with a handful of tweets, the students had overtaken another adult official’s narrative. They were in command of their own story once again.

It has become obvious that many of the most well-known students at Stoneman Douglas in Parkland, Fla., are adept at using social media, and Twitter in particular, where many journalists spend much of their time talking to one another.

With their consistent tweeting of stories, memes, jokes and video clips, the students have managed to keep the tragedy that their school experienced -- and their plan to stop such shootings from happening elsewhere -- in the news for weeks, long after past mass shootings have faded from the headlines.

This is the phoniest spin imaginable -- "the students kept the tragedy in the news," not the actual news manufacturers.

For good measure, Tuesday’s lead story by Michael Shear and Sheryl Gay Stolberg cast the National Rifle Association as the bogeyman in “Trump Retreats From Promises On Gun Control – Conceding to the N.R.A.” The tone was clearly hostile toward the pro-gun rights side.

President Trump on Monday abandoned his promise to work for gun control measures opposed by the National Rifle Association, bowing to the gun group and embracing its agenda of armed teachers and incremental improvements to the background check system.

The president’s retreat is a stark reminder -- if anyone in Washington needed one -- that the gun debate remains stuck where it has been for more than a decade. Despite scores of deaths from mass shootings in that time, Republican lawmakers fear the N.R.A.’s ability to stir up opposition in their districts....