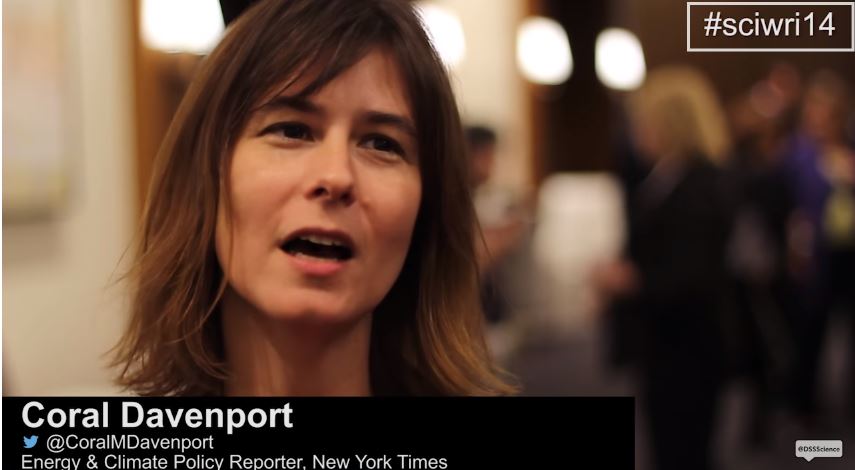 On the front page of Sunday’s New York Times, environmental reporter Coral Davenport devoted over 2,000 words to the proposition: “In the Trump Administration, Science Is Unwelcome. So Is Advice.”

As President Trump prepares to meet Kim Jong-un of North Korea to negotiate denuclearization, a challenge that has bedeviled the world for years, he is doing so without the help of a White House science adviser or senior counselor trained in nuclear physics.

The lack of traditional scientific advisory leadership in the White House is one example of a significant change in the Trump administration: the marginalization of science in shaping United States policy.

By "marginalization of science," Davenport seems to mean rejecting the liberal climate change consensus and the Iran deal.

There is no chief scientist at the State Department, where science is central to foreign policy matters such as cybersecurity and global warming. Nor is there a chief scientist at the Department of Agriculture: Mr. Trump last year nominated Sam Clovis, a former talk-show host with no scientific background, to the position, but he withdrew his name and no new nomination has been made.

These and other decisions have consequences for public health and safety and the economy. Both the Interior Department and the National Oceanic and Atmospheric Administration have disbanded climate-science advisory committees. The Food and Drug Administration disbanded its Food Advisory Committee, which provided guidance on food safety.

There are exceptions to the retreat from science. In April, scientists bristled when Jim Bridenstine, a former Republican congressman from Oklahoma who is not a scientist, took over the National Aeronautics and Space Administration. Mr. Bridenstine had questioned whether human activity is the primary cause of global warming.

But last month Mr. Bridenstine testified before a Senate committee that he had experienced a climate-science conversion. Asked if he believed greenhouse gases are the primary cause of the warming planet, he responded, “Yes.”

His own agency, he said, has found it “extremely likely that human activity is the dominant cause of global warming, and I have no reason to doubt the science.”

Mr. Bridenstine described his views as an “evolution.”

Nevertheless, as Mr. Trump prepares for the talks, he has no close aides on par with those who helped President Barack Obama negotiate a nuclear deal with Iran. Mr. Obama’s advisers included Ernest J. Moniz, a nuclear physicist who led the Energy Department and oversaw the nation’s nuclear weapons arsenal, and John Holdren, a physicist and expert in nuclear arms control who served as the White House science adviser.

“There is going to be the requirement for trade-offs, and that judgment is best made by people with technical expertise who are also very senior politically,” Mr. Moniz said. “That just does not exist in this administration.”

Of course, Mr. Trump was an outspoken critic of Mr. Obama’s Iran deal and withdrew from it last month.

Rolling back overweening environmental regulations translates for Davenport as the “excising of science.”

In Washington, the administration’s excising of science is particularly evident at the Environmental Protection Agency.

Scott Pruitt, the embattled head of the E.P.A., is the subject of at least 12 government investigations into his first-class travel, costly security detail and management of the agency. At the same time he has won praise from Mr. Trump for his speed at rolling back environmental regulations.

“This memo flouts the clear evidence of medical science,” said John Walke, an expert in clean-air policy at the Natural Resources Defense Council, an advocacy organization. “Pruitt wants to set a definition of clean air that is medically unsafe.”

The agency, after heavy lobbying by the chemicals industry, is also in the process of scaling back the way the government determines risks associated with dangerous chemicals, The New York Times recently reported.