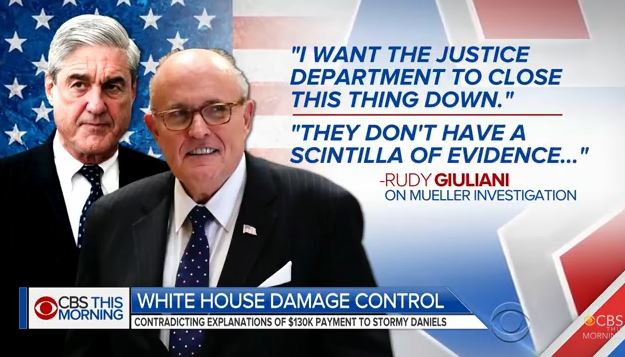 “Firestorm at White House After a Revelation” began:

President Trump’s new legal team made a chaotic debut as Rudolph W. Giuliani, who was tapped recently to be one of the president’s lawyers, potentially exposed his client to legal and political danger by publicly revealing the existence of secret payments to Michael D. Cohen, the president’s personal lawyer....

Peter Baker’s “news analysis” was merciless: “President Loses Grip on His Own Story.”

But it was reporter Katie Rogers who brought the paper’s trademark mean-spirited touch, already marking Giuiani's service as a failure in “Giuliani’s Bark May Come Back to Bite Trump.” The text box: “A bombastic former mayor undermines his client, the president.”

Rudolph W. Giuliani may be ill suited to be President Trump’s legal frontman for all of the reasons that the bombastic former mayor appealed to Mr. Trump in the first place.

Mr. Giuliani is loose-lipped, intemperate, confrontational and supremely confident that he knows better than anyone else. Like Mr. Trump himself, the man once known as “America’s Mayor” for overseeing New York City after the Sept. 11, 2001, attacks has always faced down his critics with relish.

And yet, suddenly on Wednesday night, Mr. Giuliani seemed reduced to America’s grouchy dinner guest. He found himself undermining his new client -- the president of the United States -- and the very law enforcement officials he once oversaw as United States attorney for the Southern District of New York.

He also called agents for the Federal Bureau of Investigation who raided Mr. Cohen’s office “storm troopers,” a reference to Nazis that offended others in the law enforcement community who once held Mr. Giuliani in largely high regard.

During Mr. Trump’s campaign, he was a forceful critic of Hillary Clinton, a longtime political rival and Mr. Trump’s opponent in the 2016 presidential race, and indulged in some non-truth telling that was as puzzling as it was brazen.

Rogers has a history of personal attacks on Republicans in her “news” coverage, and hagiography of Democratic figures, like Chelsea Clinton.

Media reporter Michael Grynbaum found one network biased in favor of a political party: Fox News, in “For Trump, Fox’ Friendly Turf Proves to Be a Minefield.”

There is no friendlier territory on television for Trump supporters than Sean Hannity’s nightly hour on Fox News, where President Trump is forever the victim of a witch hunt and the liberal media is perennially bent on his destruction.

That safe-space bubble popped -- in dramatic, headline-making fashion -- on Wednesday night, when Rudolph W. Giuliani, the former New York mayor and current member of Mr. Trump’s legal team, casually confirmed to the startled host that the president had personally repaid his lawyer the money he had laid out to make his problem with a pornographic actress go away.

David Marcus had an alternate take at The Federalist, encapsulated in the headline and subhead: “Rudy Giuliani Knows Exactly What He’s Doing -- Former federal prosecutor and New York City Mayor Rudy Giuliani has a simple message to Robert Mueller: Put up or shut up.”