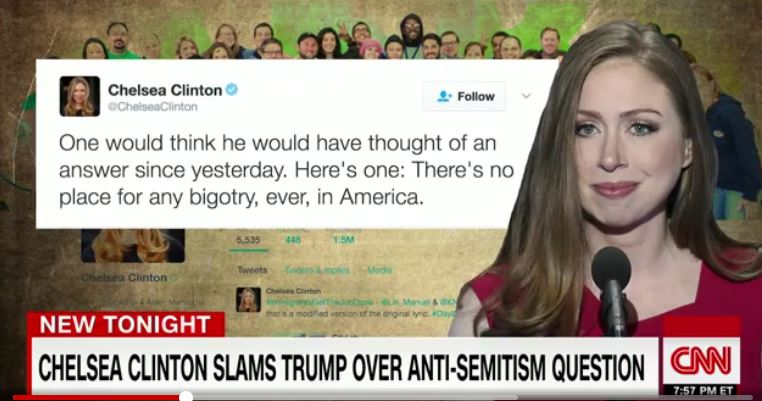 New York Times Katie Rogers tried to have it both ways in her story on Chelsea Clinton’s Twitter feed, claiming the Clinton daughters’ tweets were “innocent,” and forwarded advice from a Clinton friend to Chelsea’s “naysayers”: “Just unfollow.” Yet Rogers still reprinted some of Clinton’s highly politicized tweets, as if to keep her in the partisan mix anyway.

In the months leading to the 2016 presidential election, Democratic voters had a consistent place to look for updates on Hillary Clinton’s campaign: her daughter’s Twitter feed. From reports on her campus visits to FaceTime sessions with supporters, Chelsea Clinton’s tweets were positive, inclusive and unfailingly on message.

“Couldn’t be more proud of my mom and the campaign she’s run,” Ms. Clinton wrote on Election Day. “Let’s bring it home for her today.”

Things didn’t work out as planned, of course. And after Donald J. Trump, and not her mother, was sworn in as the country’s 45th president, another side of Chelsea Clinton seemed to emerge.

In recent weeks, she has greeted the Trump era with a more sarcastic and feisty online personality, sharing with her 1.6 million followers her fiercely held political beliefs and sparring with political adversaries in 140-character bursts. Ms. Clinton has accused a Trump adviser of spreading misinformation, admonished a Republican congressman for racist comments and pushed the president to speak out in the face of an increase in religiously motivated attacks.

All of this has raised questions -- and prompted criticism -- about Ms. Clinton’s political ambitions. If it’s coming from a Clinton, both supporters and critics have wondered, can a tweet ever be just a tweet?

But we don’t get to read much criticism from Rogers.

Several people close to Ms. Clinton and her family say that yes, this is just tweeting, and no, she is not using it as a strategy to eventually run for office.

(But we’ll cover it breathlessly anyway?)

Melanne Verveer, who served as Mrs. Clinton’s chief of staff when she was first lady, has known Chelsea since she was a girl. Ms. Verveer didn’t understand the newfound interest in the youngest Clinton’s political motives, and thinks most observers are jumping to conclusions.

“I think it’s probably natural in some ways for people to think, ‘Well, she’s the next in line’ in a political family,” Ms. Verveer said. “But I think that’s reading too much into tweets.”

(Since when has that ever satiated the internet’s thirst for content?)

Or the media’s desire to prop up one of the Clintons after Hillary and Bill blew it in 2016?

While Clinton friends demurred on the idea of her running for office, Rogers tried to keep her in the mix, but without the pressure of actual tough coverage.

Finally Rogers quoted some of the blunter criticism of Chelsea Clinton,from a New York Post headline and an “unvarnished” Meghan McCain quote: “What fresh hell am I living in where I am going to have to sit through Chelsea Clinton running for office? The media gives this grown woman with two children a pass. Every step of the way.”

But Rogers didn’t go into any detail, and Rogers resumed her defensive crouch on Chelsea Clinton’s behalf.

“Innocent tweets”? Again, the Times is having it both ways, as the article reprinted three of Clinton’s not so “innocent” tweets attacking Republican Rep. Steve King of Iowa, press secretary Sean Spicer, and Donald Trump. And if they’re no big deal, then why is the NYT covering them on the front of its Styles section in the first place.

A media truly interested in getting to the bottom of Chelsea Clinton’s tweeting life would have discussed her embarrassing backfire of a tweet from February. After a slip-up by Trump advisor Kellyanne Conway about the non-existent “Bowling Green massacre,” Chelsea tweeted:

Very grateful no one seriously hurt in the Louvre attack ...or the (completely fake) Bowling Green Massacre. Please don't make up attacks.

Glad your mom survived the gunfire in Bosnia.”

That's a rerference to Hillary Clinton embarrassing herself in March 2008, when she falsely claimed to have come under sniper fire during a visit to Bosnia in 1996 -- a falsehood exposed by my NewsBusters colleague Rich Noyes.

Jim Geraghty at National Review has spotted a pattern of fawning media coverage of the former first daughter, while also showiing the Times came tardy to the media fascination with Chelsea’s Twitter account.

Witness the recent insistence that we’re seeing a new side of Chelsea Clinton....because she’s tweeting a lot of critical things about President Trump. This is not particularly unusual behavior for a Democrat with a Twitter account. Yet Politico declares that she “lets loose on Twitter” with “a spicy, sarcastic online personality.” CNN concurs that “Chelsea Clinton embraces her Twitter sass.”....Why is Chelsea Clinton news? She’s the scion of America’s most famous Democratic dynasty, sure, but her own accomplishments in public life are meager. When can we stop pretending that hers is a voice worth listening to?

Geraghty got into the meat of Clinton’s privilege that journalist Rogers clearly wasn’t interested in:

After a few years of attempting to work in consulting and at hedge funds, she concluded she “couldn’t care about money on a fundamental level.” Then, with no experience in television journalism, she had her people call up the networks and set up a bidding war for her services as a correspondent. She made $600,000 per year for part-time work at NBC, generating what the Baltimore Sun’s David Zurawik called “a handful of reports that no self-respecting affiliate in a top 20 market would air.”

She was named an “assistant vice provost” at NYU at age 30.  She was picked to give the keynote address at South by Southwest, and honored as one of Glamour magazine’s “Women of the Year.” Now she makes $1,083 per minute speaking to public universities. And almost everything she does is decreed to be extraordinary by a pliant, pro-Clinton media. The New York Times even interviewed her about her favorite books.