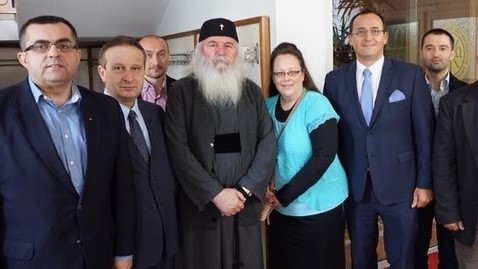 Did you know that Rowan County, Kentucky clerk Kim Davis went to jail for contempt of court in 2015 for refusing to issue marriage licenses to gay couples? If not, the New York Times will happily remind you of the fact, over and over. Liam Stack and Kit Gillet did just that in their Friday story on Davis traveling to Romania to support that country’s fight against gay marriage: “Kentucky County Clerk Campaigns Against Same-Sex Marriage in Romania.”

The online headline offered up the theme of the piece: “Kim Davis, Once Jailed in America, Campaigns Against Gay Marriage in Romania.” Apparently the New York Times was the only news outlet that seemed to find it necessary to mention David went to jail in the headline, as it also does several times in the story itself, wondering if she's a "run-of-the-mill lawbreaker." Apparently being jailed for civil disobedience is only cool in the name of liberal causes.

One doesn’t have to approve of Davis’s action to see a double standard. Civil rights leaders in the 1960s went to jail -- does that reflect badly against them? Today other Democratic politicians and protesters, with far less on the line than those civil rights leaders, participate in arrests for the sake of photo-ops, but that only puts a rebellious gloss on their protests. Not so for a religious conservative like Davis:

The Kentucky official who was jailed in 2015 for refusing to issue marriage licenses to same-sex couples has been advocating against gay marriage this week thousands of miles from home -- in Romania, where a movement to outlaw such unions has gained momentum.

Few people in Romania appear to know about the case of Kim Davis, the clerk for Rowan County, Ky., but local gay and transgender rights groups were unhappy about her visit. Some described her as a foreign interloper who had violated the laws in her own country.

Same-sex marriage is not permitted in Romania, but conservatives there have waged a battle to explicitly prohibit it, via a constitutional amendment.

The trip was organized by Liberty Counsel, a conservative American legal and advocacy group that represented Ms. Davis during the 2015 legal battle that saw her spend six days in jail for contempt of court. Ms. Davis’s actions, which came at a watershed moment for gay-rights advocates, reverberated across the country and led to lawsuits.

In both Kentucky and Romania, Ms. Davis described same-sex marriage as an attack on religious freedom.

Stack and Gillet let their sources make the same argument, particularly strange in a post-Communist dictatorship, that being locked up by the powers that be automatically makes one personally suspect.

But Vlad Viski, the president of MozaiQ, a lesbian, gay, bisexual and transgender group in Romania, denounced the visit.

“It is extremely worrying that a person who broke the law in the United States is being brought to Romania and presented as some sort of hero of Christianity,” he said on Wednesday.

So if all laws are by definition good and breaking them by definition bad...what does the Times and the gay activists think about the laws that criminalized homosexuality in Romania until 2001? And were jailed dissidents of the Communist regime also worthy of hostility for the mere fact that they were jailed?

Ms. Davis has lent her support to a cause that has been making strides in Romania, a mostly Orthodox Christian country that decriminalized homosexuality in 2001. The Romanian Constitution describes marriage in gender-neutral language, “two spouses.” Although civil law defines marriage as a union of a man and a woman, conservative groups want to pass a constitutional prohibition against legal recognition of same-sex marriages.

The bias crept into the story’s online subheads: “L.G.B.T. Groups Are Aghast” and “Prisoner of Conscience?”

More suggestions that Davis’s stint in jail for contempt of court makes her more akin to a common criminal than a government protester.

Ms. Davis’s visit alarmed local gay-rights activists, who scoffed at the notion that their country should be taking constitutional advice from an American who had been jailed for defying a court order.

“It is unacceptable for a person who disobeyed her own Constitution to tour Romania and give out advice about how Romania’s Constitution should be changed,” Mr. Viski said.

The letter said the organizers had “falsely” promoted “Christian hero Kim Davis, an American citizen convicted by U.S. courts in 2015,” as a “heroine of religious freedom.”

To Ms. Davis’s supporters in both countries, she is not a run-of-the-mill lawbreaker, but a former prisoner of conscience in a larger cultural and religious battle.

Stack and Gillet led the Davis camp have a say at the end.

Harry Mihet, the group’s vice president, who had traveled with Ms. Davis to his native Romania, compared the campaign against same-sex marriage there to the country’s struggle against Communism.