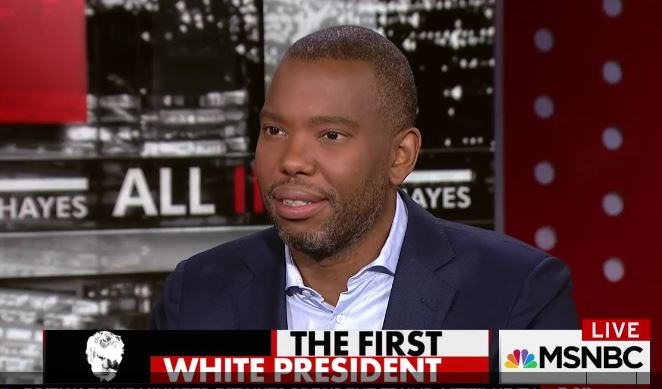 The subhead gave no hint of any controversy around Coates: “With a new book on the Obama presidency and its aftermath, Ta-Nehisi Coates learns to accept the fame he never sought.” Yet even Andrew Sullivan backed off the activist in a recent long think piece for New York magazine, showing how Coates’ views of whites had grown sour and heartless:

He calls the Obama presidency a “tragedy,” and describes many Trump supporters as “not so different from those same Americans who grin back at us in lynching photos.” He’s written about how watching cops and firefighters enter the smoldering World Trade Center instantly reminded him of cops mistreating blacks: They “were not human to me.”

Classy guy. But Concepcion ignored all that, and her mild criticisms of Coates came solely from the black left:

When Ta-Nehisi Coates’s first book, “The Beautiful Struggle,” was published in 2008, it landed with barely a ripple. At the time, Mr. Coates was a struggling writer. He had lost three jobs, and he and his family relied on unemployment checks, his wife’s income and occasional support from his father to stay afloat. By the time the book came out in paperback, his fortune had shifted slightly; he’d become a regular contributor to The Atlantic magazine, writing a blog that attracted a moderate but engaged audience.

Suffice it to say that Mr. Coates’s second book, “Between the World and Me,” published in 2015, did not suffer the same lack of readership. An early galley was sent to Toni Morrison, who strongly endorsed the book, calling it “required reading” and likening Mr. Coates to James Baldwin. That year, Mr. Coates was awarded a MacArthur Fellowship and the National Book Award in nonfiction. His appearances filled auditoriums and the book was adopted on college syllabuses. It has sold 1.5 million copies internationally and has been translated into 19 languages, catapulting him to prominence.

At the age of 41 (he turns 42 on Saturday), Mr. Coates has become one of the most influential black intellectuals of his generation, joining predecessors including Ms. Morrison, Professor Henry Louis Gates Jr., and Dr. Cornel West....

Concepcion stepped out from behind her usual reviewer’s desk and eagerly provided Coates some book publicity:

His new book, “We Were Eight Years in Power: An American Tragedy,” traces this ascent. In it, he collects articles he wrote for The Atlantic during Barack Obama’s presidency, interspersing them with explanatory, autobiographical essays. The book goes on sale Tuesday, Oct. 3, and already, his book-tour stop at Brooklyn’s Kings Theater has sold out -- a far cry from the intimate crowds of his early career.

The [Harlem restaurant] event was brimming with people close to Mr. Coates: his wife, son and mother; the New Yorker writer Jelani Cobb; Barry Jenkins, the director of “Moonlight”; and Dr. Painter, among others. Mr. Coates was comfortable and relaxed, joking once about the rap music that blasted in through the windows as a car drove by -- “That’s so appropriate, being upstaged by Kendrick.” He seemed, in that moment, perfectly settled in between the intellectualism and hip-hop that influenced him, freed from, as he describes in “We Were Eight Years,” “those young years trapped between the schools and the streets.”

Concepion included some mild naysayers from the black left:

There has been criticism, also, of the conspicuous absence of women’s experiences in Mr. Coates’s work. In a review of “Between the World and Me,” Buzzfeed’s Shani O. Hilton wrote, “Black womanhood in real life isn’t -- as it largely is in “Between the World and Me” -- about beating and loving and mourning black men.” She lamented that Mr. Coates’s book, which is specifically about the lives of black males, “is one that many readers will use to define blackness.”

She was soon back cheerleading for Coates:

Yet Mr. Coates’s work has resonated deeply. In a telephone conversation, Dr. Painter said that his vision of the United States was congruent with her own. “I think the education that he gave himself -- his upbringing and his reading as a student, his reading since that time -- all of that has given him a really solid intellectual basis for what he’s talking about.”

Chris Jackson, Mr. Coates’s longtime editor and the publisher of One World, an imprint of Random House, said that Mr. Coates’s curiosity is “matched with a kind of obsessiveness.”

“He would read 1,000 books about the Civil War. He would talk to every scholar,” he said, “He’d read novels and slave narratives. Then, at a certain point, he started to synthesize all this information into some conclusions about, ‘what does this mean?’”

She did reveal unwittingly just how fatuous today’s left has become:

He returned to the United States last year, ill-prepared for his newfound celebrity. He started to receive invitations to “secret rich people meetings.” He was offered opportunities unrelated to his work as a journalist: to direct music videos (which he turned down) and write comic books and screenplays (which he accepted). His appearances became spectacles, and he found it strange for people to clap for him when he walked into a room.