Boston Globe Marks 25th Anniversary of 'The Year of the Woman' With Democratic, Feminist Mythology on Sexism 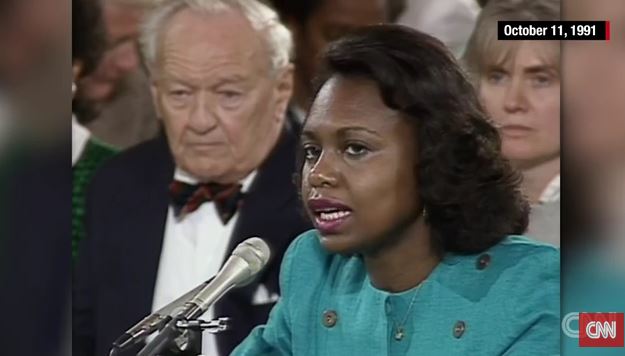 The Boston Globe celebrated a liberal milestone on Saturday: The 25th anniversary of The Year of the Woman in Congress, driven by Anita Hill’s testimony before the Senate Judiciary Committee, alleging she was sexually harassed by Judge Clarence Thomas. While Hill failed to stop Thomas from ascending to the Supreme Court, she became a heroine in liberal feminist (and media) circles.

Reporter Stephanie Ebbert, who covers “gender issues” for the Globe, posed the question, “25 years after ‘The Year of the Woman,’ what’s changed?” She implied Donald Trump ushered in an era of sexism by defeating Hillary Clinton, without mentioning Clinton’s gross flaws as a candidate, or Bill Clinton’s own voracious sexual appetites, while lumping contentious policy debates over Obamacare as prima facie assaults on women’s rights. Ebbert also fostered the feminist media myths around Sen. Elizabeth Warren and Sen. Kamala Harris.

The story included this loaded photo caption: “Vice President Mike Pence sat at the center of a conference table during negotiations with the House Freedom Caucus. Only men can be seen in the photograph.”

Twenty-five years ago, women who chafed at the spectacle of an all-male Senate panel grilling Anita Hill over her allegations of sexual harassment rose up and entered the corridors of power. The media dubbed it “The Year of the Woman,” a title that sounded, to many, irritatingly temporary.

The explosive gains of 1992, which more than doubled women’s meager representation in Congress, gave way to incremental growth that merited no slogan. It would take women another two decades to grow their ranks on Capitol Hill by the 68 percent rate achieved in that single year.

(When the media tried to sell the original Year of the Woman back in 1992, the Media Research Center pointed out they were actually two years late: “...the national media hailed the new phenomenon, spurred by the outrage ‘many women’ felt over the Senate Judiciary Committee's treatment of Anita Hill and her unproven testimony. The number of women did swell noticeably in both houses of Congress, but this wasn't the first ‘Year of the Woman.’ In 1990, seven Republican women and two Democrats made the ballot in November for the U.S. Senate. That's almost the opposite of 1992, when ten Democrats and one Republican ran.”)

Ebbert’s piece read more like a feminist opinion submission than a journalistic offering.

This weekend, a quarter century after the Year of the Woman elevated expectations for women in politics, some 250 women gathered in Boston for the biennial convention of the National Women’s Political Caucus to consider what comes next. These days, women are bristling at fresh images of all-male panels negotiating away their maternity coverage, and though their outrage may prove to be as motivating as it was in the early 1990s, they are confounded to feel it a quarter century later.

Still, some feminist activists hope the brutal 2016 presidential election cycle, which showed many women that Americans were willing to endorse a libertine man over an ambitious woman, has triggered a new wave of political engagement.

Lauren Duncan, a Smith College professor who teaches the psychology of political activism, said that the gender-loaded election cycle may prove to be as motivating as the 1991 Senate hearings for Supreme Court Justice nominee Clarence Thomas, where America watched Hill being scrutinized for her allegations of sexual harassment by a powerful man.

For many women, all of this is seen through the filter of a president who was captured on video boasting about grabbing women’s genitalia.

After harping on sexual assault and harassment, it’s borderline bizarre that Bill Clinton’s name was not mentioned, and his alleged victims Paula Jones, Kathleen Willey, and Juanita Broaddrick were of course ignored as well.

The new administration has also reversed the government’s course on women’s health issues, trying to unravel Obamacare’s mandatory insurance coverage for birth control, for instance, even after attempts to repeal the Affordable Care Act have failed.

Somehow, a Hillary defeat signifies a defeat for all women (never mind the many women who voted against her in 2016 – and her defeat in the Democratic primary in 2008, for that matter). And of course, Sarah Palin, who would have become the first female vice-president if the media’s new hero John McCain had won in 2008, didn’t merit a mention.

Yet, the notoriously bruising political arena may seem all the more perilous after Hillary Clinton’s experience, and progress has been slow. Only 52 of Massachusetts’ 200 state legislators are women.

Ebbert did find some progress for women legislators, at least when they were blocking conservative-pushed legislation.

When they have a seat at the table, women can sometimes make waves, US Representative Niki Tsongas noted at a reception of the women’s political caucus Friday evening.

Last week’s middle-of-the-night vote to repeal the Affordable Care Act was blocked by the steadfast opposition of two female US senators, Susan Collins of Maine and Lisa Murkowski of Alaska, along with John McCain of Arizona.

The reported relayed some recent media myths that have already hardened into conventional feminist wisdom.

But even when women are seen in Congress, they are not always heard. Senator Warren was ceremoniously shushed for speaking too long about Attorney General Jeff Sessions. Hashtags ensued.

When the Senate Select Intelligence Committee interviewed Sessions, Senator Kamala Harris’s tough questioning was regarded as overly aggressive; her fellow senators interrupted her in a bid to make her stop interrupting him.