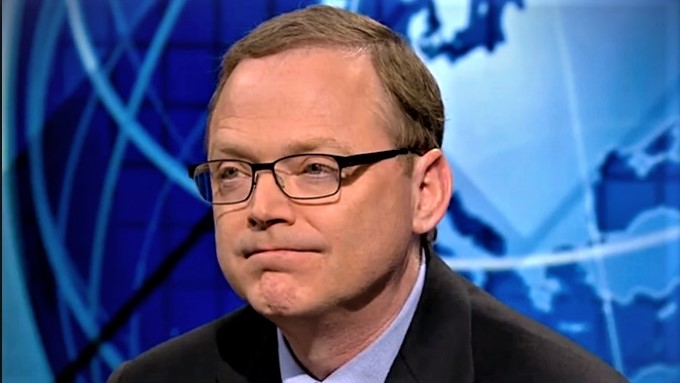 New York Times reporter Alan Rappeport found a wedge between President Trump and his most fervent supporters on an issue the paper is reliably left-wing on. He tried to gin up a controversy regarding pro-immigration economist Kevin Hassett, picked to lead the president’s Council of Economic Advisers: “In Pick of Pro-Immigration Economic Adviser, the President’s Base Senses Betrayal.”

The hostile ideological labeling of the "widely respected" Hassett's opponents was typical of the paper’s pro-amnesty stance on immigration, with what seems a purposeful blurring of the lines between legal and illegal immigration.

The choice by President Trump of a pro-immigration economist to lead his Council of Economic Advisers is stirring a backlash among his most ardent supporters, who worry it is an abandonment of the tough stance he took on the issue during the campaign and the latest in a string of broken promises.

Hassett has clashed with Republicans on being too hostile to immigrants, which conveniently makes him a “widely respected conservative economist.” The phrase “widely respected conservative” doesn’t get much play in the paper – the last person so described by a Times reporters was evidently in 1998, when Rep. Henry Hyde was heading the impeachment inquiry against President Bill Clinton.

Like most economists, Mr. Hassett believes that immigration spurs economic growth. At times he has pilloried Republicans for becoming the “Party of White,” arguing in 2010 that Republicans like then-Gov. Jan Brewer of Arizona “have too often appeared hostile to immigrants.” In 2013, Mr. Hassett said the United States should double its intake of immigrants.

But for those who backed Mr. Trump because of his promises to build a wall and deport illegal immigrants, such notions are heresy.

And the fringe site Infowars is evidently now “conservative.”

Mr. Trump’s right-wing media supporters are also up in arms. Breitbart, the website that was formerly run by Stephen K. Bannon, the president’s chief political strategist, said Mr. Hassett’s appointment showed that the “corporatist, business-first” was muscling out the “populist, America-first” that got Mr. Trump elected. Commenters on the conservative website Infowars were similarly appalled, with some lamenting, “We have been sold a false bill of goods.”

Some leaders of the white nationalist “alt-right” movement also interpreted the move as a sellout. “This is yet another betrayal, just like breaking his promise to deport all illegal immigrants and to repeal President Obama’s executive amnesties,” said Jared Taylor, the editor of the online magazine American Renaissance, who spoke highly of Mr. Trump during the campaign.

The controversy follows decades of grappling within the Republican Party over how to address immigration. After some party leaders considered a more inclusive approach, Mr. Trump swung the party to the right as a candidate when he painted immigrants as criminals who were stealing American jobs and depressing wages.

A major point that Rappeport doesn’t bother to clarify: Hassett is talking about legal immigration in this 2013 National Review article and  elsewhere.

Economists who have been wary of the recent wave of anti-immigrant sentiment are hopeful that Mr. Hassett will be an influential voice in the administration to encourage a more welcoming approach.

Apparently no sensible person can be against immigration. Again Rappeport keeps the lines blurred between legal immigration -- which has Republican support -- and illegal immigration, which does not.

“Immigration is really not a debatable issue,” said James Miller, who led President Ronald Reagan’s Office of Management and Budget and signed the letter. “Immigration is a good idea if you control it the right way.”

“He might be a sign of some stability, but no one knows if the president is going to listen to him, so it’s premature to say it is encouraging,” said Austan Goolsbee, who was chairman of Mr. Obama’s Council of Economic Advisers. “Regarding his critics, there is not a single reputable economist they could find in either party that would support their worldview.”

Another piece hostile to conservatives had a link to “undocumented immigrants,” digging up an old grudge Democrats have held against an “infamous” Republican who dared to shout something at President Obama eight years ago: “He Shouted, ‘You Lie!’ Now Tables Are Turned,” by Jonah Engel Bromwich on Wednesday.

Representative Joe Wilson, the South Carolina Republican who gained a measure of infamy after shouting “you lie” at President Barack Obama during a joint session of Congress in 2009, had that memorable catchphrase hurled back at him by a group of his constituents at a town hall event on Monday.

Bromwich found a local Democrat to rub it in:

“People feel really let down by Joe Wilson, and there’s a lot of really high emotion when it comes to him,” [Julie] Edwards, 29, said in a phone interview on Tuesday. “A lot of it comes down to disrespecting President Barack Obama. Even a lot of Republicans in our state were facepalming over that.”

Ms. Edwards was referring to Mr. Wilson’s outburst in 2009 in response to Mr. Obama’s pledge to Congress that undocumented immigrants would not be covered by his health plan. The eruption was seen by many as a nadir for bipartisanship, and the behavior of Mr. Wilson, who apologized to the president personally and in an official statement, was criticized by members of both parties.