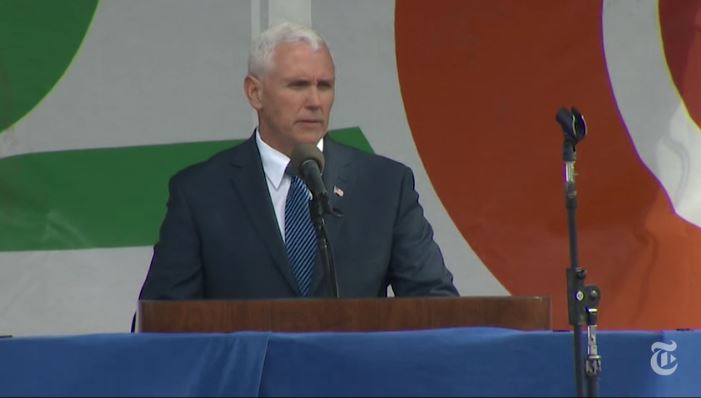 What a difference an election makes: The annual pro-life March for Life, long ignored by the New York Times, led the paper’s National section (page A8) on Saturday, driven by a little political star power in the form of Trump counselor Kellyanne Conway and Vice President Mike Pence.

Jeremy Peters and Yamiche Alcindor’s account was teased with a photo from the rally on the front page: “Thousands March Against Abortion.” The story itself found "tens of thousands." The headline read “A Rallying Cry, and an Act of Defiance.” The text box focused on the political angle: “Anti-Abortion Marchers Take Hope In Trump’s Outspoken Support.”

Droves of men, women and children opposing abortion swarmed the National Mall on Friday in a demonstration that served not only as a rallying cry for their movement, but as a peaceful act of support for the new president they have embraced as their improbable champion.

The crowd gathered just a few blocks from where hundreds of thousands of women marched last weekend to protest President Trump -- a striking and symbolic juxtaposition for a country cleaved by its most recent election.

The contrast was not lost on the marchers or the speakers, who were optimistic that their cause would benefit greatly from having anti-abortion Republicans in control of Congress, the White House and, they hoped, eventually the Supreme Court.

As much as the march on Friday spoke to the divided politics of the moment, it also pointed to a sweeping shift in policy under the new administration. Mr. Trump, who has committed to rolling back abortion rights and naming anti-abortion justices to the Supreme Court, sent two of the highest-ranking White House officials to address the crowd. It was a gesture of solidarity that march organizers said went further than any Republican administration had gone.

The two officials, Vice President Mike Pence and Kellyanne Conway, a counselor to the president who has been a leading figure in the anti-abortion movement for two decades, told the marchers of the White House’s dedication to their cause.

The tone was fairly positive throughout the robust report, with multiple interviews with marchers.

Marchers traveled to Washington in church groups, on high school class trips and in family minivans. Many noted with a hint of disapproval that they could not be more different from the anti-Trump Women’s March last Saturday -- culturally or politically.

Jennifer Brock, 55, from Scranton, Pa., held a pink sign that read, “When they go nasty, we go classy,” a hybrid allusion to Mr. Trump’s “nasty woman” attack on Mrs. Clinton and the Michelle Obama-coined slogan, “When they go low, we go high.”

Ms. Brock said she found many of the women last week crass and self-degrading with their “pussy hats” and obscenity-laced signs and speeches. “My idea as a woman is that we can speak and be strong, but I don’t know that it really helps our cause to be vulgar and nasty,” she said. “I’d like to present a different message: that women can be strong and dignified and gracious.”

It marked quite a shift from the attitude of previous years. In 2013, after a five-year absence of print stories, the paper finally covered the march with a so-so story, only to pair with a rebuttal about gun control. In 2014, after yet another news blackout, Public Editor Margaret Sullivan waded into the controversy: “The lack of staff coverage unfortunately gives fuel to those who accuse The Times of being anti-Catholic, and to those who charge that the paper’s news coverage continually reflects a liberal bias...” But the Times failed to take Sullivan’s advice. The 2015 march coverage amounted to a half-sentence in a hostile story, and in 2016 the paper also failed to devote a full story to the March for Life.

(By contrast, the Times is eager to publicize any scrap of news it deems helpful to one of its pet causes, such as amnesty for illegals: In January 2010 it granted a full news story to a protest involving a grand total of four illegal immigrants.)