Will the New York Times Finally Recognize Pro-Life Movement, and March for Life? 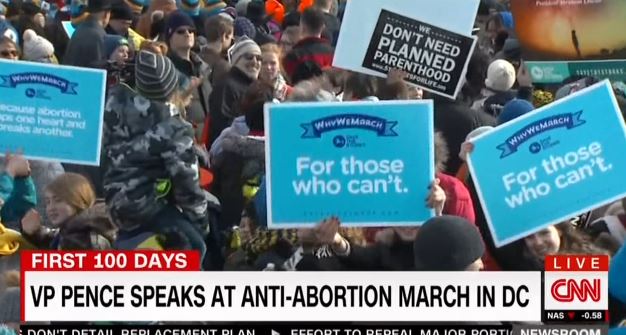 It happens every year in late January -- the annual March for Life, the 44th edition happening today -- around the anniversary of the Supreme Court decision Roe v. Wade that legalized abortion.

It reliably draws to the nation’s capital tens of thousands of pro-lifers, many of them young people, out into the winter cold, only to be virtually ignored by a paper that routinely gives out space to far sparser liberal protests on politically correct issues like amnesty for ‘undocumented” “Dreamers.”

Yet early January found a couple of decent stories about the movement by Sheryl Gay Stolberg, albeit one keyed to Trump’s high-profile White House counselor Kellyanne Conway’s planned address at today’s March for Life: “Strategist Who Helped Manage Trump’s Win Will Speak at a Major Anti-Abortion March.”

Too bad the story, as it appeared it print, managed to mention the actual name of the march just once, when identifying its president.

This will be the 44th year of the march, which organizers say is typically attended by tens of thousands of anti-abortion activists. The annual event, often held on Jan. 22 but pushed back to Jan. 27 this year because of the inaugural, marks the anniversary of Roe v. Wade, the 1973 Supreme Court decision establishing a national right to abortion.

Stolberg also looked into the hypocrisy of the women’s march sidelining pro-life views in “Views on Abortion Strain Call to Unite At Women’s March" on January 19.

But mixed reviews for this Thursday’s preview of the March for Life: “Abortion Foes Compete With Women’s March – Set for Its Turn on Stage, Group Aims for Turnout to Answer Saturday’s Rallies.” After decades of virtually ignoring the March for Life, the Times is suddenly raising the stakes on pro-life organizers to come out in force. Reporters Laurie Goodstein and Anemona Hartocollis pressed:

Opponents of abortion watching the women’s march on their televisions last Saturday stewed as they saw the Planned Parenthood logo over the stage and the actress Scarlett Johansson praising the group for the gynecological care she received as a teenager.

But for these viewers, there was an even bigger problem. The women’s march had drawn an estimated half-million people to Washington, and many more to simultaneous demonstrations around the country, dominating the nation’s news coverage just six days before abortion foes were holding their annual march.

The Women’s March on Washington certainly dominated the New York Times coverage both in print and online, with live updates from the podium – and even the Style section.

Since then, the organizers of that march have been telling their followers: You’d better turn out on Friday.

This year’s anti-abortion march in Washington -- the 44th annual March for Life -- was expected to be a celebratory event at which abortion opponents could finally savor a few victories. The new president, Donald J. Trump, is already delivering on his promises to sign a slate of anti-abortion measures. He has promised to nominate a Supreme Court justice who could overturn Roe v. Wade, the decision that legalized abortion 44 years ago. And a Congress dominated by Republicans is poised to cut funding for Planned Parenthood, the nation’s largest abortion provider.

But a new sense of urgency, anxiety and maybe a little envy has accompanied this year’s event, with anti-abortion organizers suddenly realizing they had a tough act to follow.

On Friday, Times political reporter Jeremy Peters peered at the issue through the liberal prism of “the culture war” in “Conservatives See Hope In a Long Abortion Fight.”

Sensing a political opportunity they have not had in more than a decade, social conservatives are preparing for a lengthy fight over abortion rights that promises to widen the culture war fissures that Republicans have tried for years to bridge.

Again, the Times delayed actually providing a name for the March for Life until a single mention in paragraph 14 noting Conway would be a featured speaker. At least Peters provided interesting details.

How Mr. Trump -- a former Democrat who once declared, “I’m very pro choice” -- became an unbowed voice for the anti-abortion movement is a story of savvy political transformation and bald expedience. Women in the movement, like Ms. Dannenfelser of the Susan B. Anthony List, once publicly declared themselves “disgusted” by him.

Mr. Trump went even further himself, disregarding Ms. Conway’s advice by talking about late-term abortion in the most graphic of terms, a move that endeared him to the movement’s supporters. Today, conservatives see his line “rip the baby out of the womb of the mother just prior to the birth” as a turning point in his campaign.

In an interview, Ms. Conway marveled at how Mr. Trump had flipped the script. “I’ve been working on pro-life messaging for two decades in this town,” she said. “And it took a billionaire man from Manhattan who had spent most of his life being pro-choice to deliver the most impassioned defense of life that many have ever heard.”

Above that story was a more typical defense of abortion from Senegal, “Clinics for World’s Vulnerable Brace for Trump’s Anti-Abortion Cuts.”

The vital question remains: What will tomorrow's paper say, if anything, about today's March for Life?