NY Times Mad at Trump for Playing Race Card on Hillary, as They Play It Against Him 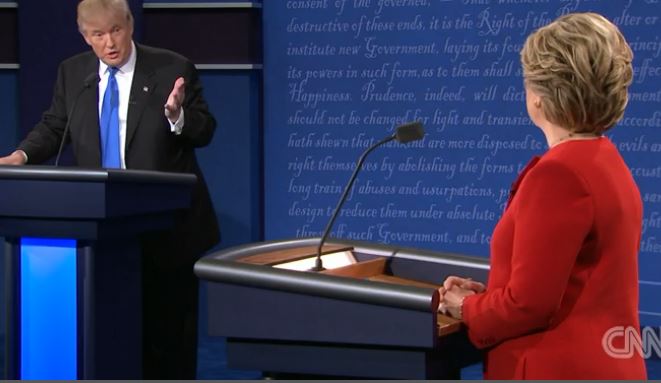 The first presidential debate between Donald Trump and Hillary Clinton is in the books, and the front page of the New York Times registered an amazingly slanted front-page “news analysis” by political reporters Michael Barbaro and Matt Flegenheimer, “Hesitant at Start, Clinton Sought to Leave Trump Out Cold.” They sternly rebuked Trump for daring to suggest Hillary Clinton had once been insensitive about race (that line of attack is apparently reserved for Democrats and the media to use against Republicans):

It started with a mystifying missed opportunity on race. It ended with a piercing attack on gender.

Hillary Clinton’s performance in the first presidential debate on Monday veered from uncertain and tentative to firm and, ultimately, scorching.

No amount of practice, it seemed, could fully prepare her -- or perhaps anyone -- for Donald J. Trump’s hurricane of factual distortion, taunting interruptions and blustery generalities.

Mrs. Clinton seemed to slowly but steadily learn how to confront and subdue Mr. Trump on the fly, as tens of millions of Americans watched.

The reporters seemed quite offended that Trump was playing the race card the way it has been played against him.

No moment seemed to better encapsulate her early misfires than an improbable and audacious line of attack from Mr. Trump, who has openly lied about President Obama’s place of birth and brazenly told black Americans that their communities, schools and job opportunities are uniformly awful.

It was Mrs. Clinton, he said, who had grievously offended African-Americans when she described youthful violent criminals in the inner cities as “superpredators.” No matter that the line was 20 years old, or that it was uttered in an entirely different era when America’s cities were ravaged by crime, or that Mrs. Clinton has expressed regret for saying it.

It was a staggering spectacle: Momentarily, perhaps, but against all odds, Mr. Trump -- whose business career and candidacy have prompted loud and repeated accusations of racism -- had managed to make himself appear as though he were a more faithful advocate for the nation’s black community.

Mrs. Clinton’s challenge was evident from the moment she walked onto the stage at Hofstra University on Long Island: How much respect should she show to a rival of unparalleled incivility, who misrepresents the truth with abandon, crassly rates women’s looks on a scale of 1 to 10 and casually denigrates entire ethnic groups -- a man whose words Mrs. Clinton has described as racist, xenophobic and misogynistic?

Then the Times admitted the obvious – that moderator Lester Holt put his thumb on the scale:

Mrs. Clinton eventually found her footing in the second half of the debate. The moderator, Lester Holt, helped.

After Mr. Holt confronted Mr. Trump over his repeated insinuation that Mr. Obama was born outside the United States, he turned to Mrs. Clinton for a response.

“Well,” she said coolly, “just listen to what you heard.”

Mr. Holt again assisted, this time by pressing Mr. Trump on his remark that Mrs. Clinton lacked a presidential “look.” Mr. Trump repeated the charge, but pivoted to attack Mrs. Clinton’s physicality in a different way. He said -- repeatedly, and bitingly -- that she lacked the “stamina” to serve.

This time, Mrs. Clinton was prepared.

“If he travels to 112 countries and negotiates a peace deal, a cease-fire, a release of dissidents, an opening of new opportunities in nations around the world, or even spends 11 hours testifying in front of a congressional committee,” she began, “he can talk to me about stamina.”

Then she went in for the kill.

She went on, eagerly, in a way she had failed to when Mr. Trump dredged up her description of young black men as “superpredators.”

Patrick Healy and Jonathan Martin’s lead story took pains to cast the debate as damaging for Trump, especially among women.

Mr. Trump repeatedly interrupted Mrs. Clinton and at times talked over her throughout the 90-minute debate, making slashing attacks that surely pleased his Republican base but may have been off-putting to women and undecided voters. He also left unchallenged her assertion that he paid no federal taxes for years.

The debate took on a surreal quality at times, with more discussion of insults like “slobs” than immigration or the Affordable Care Act. Mrs. Clinton came off as a classically prepared debater who used Mr. Trump’s record and words against him at 19 separate moments, while Mr. Trump seemed to be improvising on stage much of the time. And Mr. Trump was stunningly personal in his attacks, such as questioning Mrs. Clinton’s stamina.

Beyond the frequent policy clashes and vivid personality differences, the hostility between the two candidates was unmistakable. Mrs. Clinton was all icy stares and pointed rebukes, while avoiding the sort of prickly reactions that hurt Mr. Obama in his first debate against Mitt Romney in 2012 and were devastating to Al Gore in his initial debate against George W. Bush in 2000.