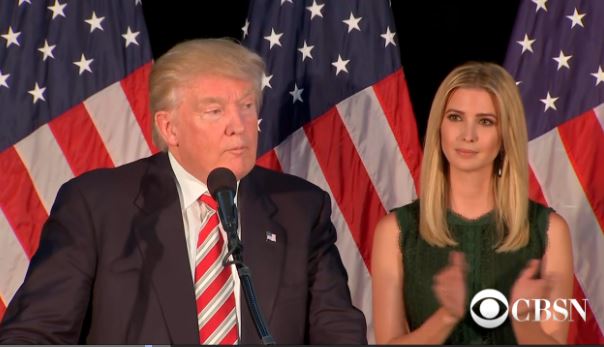 No points for “compassion” for a Republican from the New York Times, even when the party’s presidential candidate makes a big move in a liberal direction, as Donald Trump did with his proposed maternity leave and child care mandate.

On Wednesday’s front page, the story by Nick Corasaniti and Maggie Haberman emphasized the cynical political aspect of the move, while indicating the subsidies were feeble: “Trump Unveils Plan to Expand Aid to Parents – Hoping for Strides With Female Voters.”

A related story from Italy treated as bizarre the idea that mothers could be expected to bear and raise their own children without subsidies from the state: "The problem is not a lack of desire to have children, critics of the campaign say, but rather the lack of meaningful support provided by the government and many employers in a country where the family remains the primary source of child care."

A photo caption over the Trump story read: “Donald J. Trump after a speech Tuesday in Aston, Pa. Social conservatives praised his child care plan, but some groups had doubts.” In the Times telling, those groups were all on the left, with the paper ignoring concern from the right.

There was no benefit of the doubt given the GOP candidate:

The proposals, which Mr. Trump outlined in the politically critical Philadelphia suburbs along with his daughter Ivanka, represent a new attempt to court female voters who polls show have been alienated by his bombast and history of provocative remarks about women.

Mr. Trump’s decision to put forward such a plan represents a different approach from the one taken by previous Republican presidential nominees.

But in selling his case, Mr. Trump stretched the truth, saying that his Democratic rival, Hillary Clinton, has no such plan of her own and “never will.”

Mrs. Clinton issued her plan more than a year ago, and it guarantees up to 12 weeks of paid family and medical leave for a newborn or a sick relative, financed by an increase in taxes on the wealthiest Americans. On Twitter, her campaign posted a link to her plan after Mr. Trump’s remark.

Mr. Trump and his daughter spoke about the issue at the Republican National Convention in July, but the candidate had not mentioned it publicly until Tuesday. Mr. Trump faces a potentially record-high gender gap with women, but pushing the proposal so close to the election risks looking slapdash on a serious topic.

The campaign staved off potential complaints from social conservatives who have historically frowned on giving incentives to mothers to work outside the home, by vowing to make those caretaker roles tax-deductible.

Another proposal aimed at lower-income parents is a dependent care savings account, a version of a flexible spending account usually offered by employers. Such accounts would be universal and used for after-school or traditional child care, with a government match of $500 a year -- a minuscule amount given the cost of such care, and given the difficulty that lower-income families have putting away money in such accounts.

The Times quickly dealt with Republican opposition to such regulations.

“I was quite pleased with it,” said Tony Perkins of the conservative Family Research Council. He called it “innovative” in acknowledging “the contribution that stay-at-home parents make.”

But the plan was met with criticism from the Clinton campaign and skepticism from some child care advocacy groups, which warned that the people most in need of relief would not get it.

The Times’ labeling bias continued. While FRC above was twice considered “conservative,” the reporters hit Trump from the left with an unlabeled liberal advocacy group:

Paid leave has increasing political resonance. One of the major reasons the share of women working in the United States has fallen behind other developed countries is the lack of paid family leave, according to research by Cornell University economists.

Ms. Labaton expressed skepticism about the proposal “coming less than 60 days before Election Day,” deriding it as “a naked attempt to court women voters while not actually offering up much by way of genuine support.”

In a related story from Italy, Rome-based NYT journalist Gaia Pianigiani treated as bizarre the idea that mothers could be expected to take care of their own children in “Italy’s ‘Fertility Day’ Ads Anger Women Stymied by Lack of Support.” A controversial government effort to promote “Fertility Day” evidently ignited “a deeper and lasting debate about why it is that Italy has one of the lowest birthrates in the world, and what can be done about it."

The problem is not a lack of desire to have children, critics of the campaign say, but rather the lack of meaningful support provided by the government and many employers in a country where the family remains the primary source of child care.

“I should be a model for their campaign, and I still feel very offended,” said Vittoria Iacovella, 37, a journalist and mother of two girls, ages 10 and 8. “The government encourages us to have babies, and then the main welfare system in Italy is still the grandparents.”

By contrast, in France, the economy has been flat, too, but a family-oriented system provides a far more generous social safety net that includes day care and subsidies for families to have children. There, women have two children each on average.

Figures from Istat, the national statistics agency, show that Italian women with children are far less likely to work than mothers in other European countries, which provide greater social services.