It's suddenly acceptable in the New York Times to call liberal hero Woodrow Wilson a racist on the front page, now that a black campus pressure group is making demands that Princeton University strike the name of Wilson, president of the university in the early years of the 20th century, from the name of its public policy school .

For years, prominent conservatives have been reminding liberals of the blatant racism and discrimination practiced by the Democrat, who led the country through the First Great War and signed progressive regulatory legislation on employment and unions, and who established the Federal Trade Commission and the Federal Reserve. This heralded Progressive politician also jailed anti-war resisters, re-segregated the U.S. military, and as Princeton president, refused to admit blacks.

Yet the New York Times has long ignored those embarrassing facts when coming from the right. That's when they're not trashing the conservatives who make the arguments, like Jonah Goldberg did in "Liberal Fascism," and Glenn Beck, and accuse them in headlines of "Hating Woodrow Wilson."

But in this year of historical revisionism, when confederate flags are coming down and Confederate names being chiseled off campus awnings, the Black Students League at Princeton is also demanding acknowledgement of Wilson's racist legacy, and the story suddenly made the front of Monday's Times. Yet one can still sense the reluctance at the Times to criticize a progressive hero in "At Princeton, Woodrow Wilson, a Heralded Alum, Is Recast as an Intolerant One." At no point in Andy Newman's story is the former President identified either as a progressive, a liberal, even a Democrat. The Times wrote on Monday: 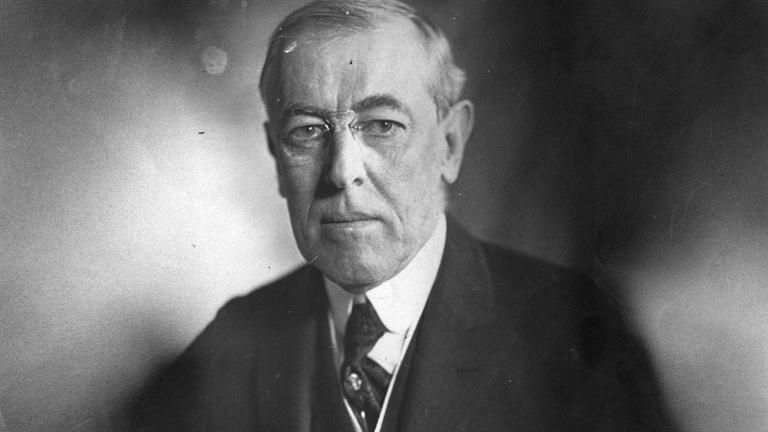 Perhaps best known for leading the United States during World War I and for trying to start the League of Nations, Wilson as president rolled back gains blacks had made since Reconstruction, removing black officials from the federal government and overseeing the segregation of rank-and-file workers.

Raised in the South, he wrote of “a great Ku Klux Klan” that rose up to rid whites of “the intolerable burden of governments sustained by the votes of ignorant Negroes.”

During Wilson’s tenure as president of Princeton, no blacks were admitted -- “The whole temper and tradition of the place are such that no Negro has ever applied,” he wrote -- though Harvard and Yale had admitted blacks decades earlier. Princeton admitted its first black student in the 1940s.

Yet in 2010 the Times defended Wilson's Progressive ideology when he was under attack by conservatives Goldberg and Beck, as shown by the headline to a "Room for Debate" opinion collection: "Hating Woodrow Wilson." (Hat tip John Carney).

Jill Lepore's attacked "far right" conservatives while defending Wilson in "Why Woodrow Wilson Makes a Good Bad Guy," glossed over both the president's personal racism and his aggressive re-segregation of the federal civil service, which included separate bathrooms and cafeterias for whites and blacks. Lepore wrote:

Conservatives wish to turn the word “progressive” into an insult, in much the same way that the word “liberal” became a smear during the 1988 presidential campaign. Liberals are bad at labeling things, not least themselves, their political opponents, and their policies; conservatives are good at it.

To the campaign to make “progressive” a slur, Wilson is useful. Much as many people admire aspects of his presidency, he has no natural constituency any more, right or left. He was opposed to female suffrage. He supported Jim Crow. He wrote about Anglo-Saxon racial supremacy. He makes a good bad guy. He was also an intellectual, the first U.S. president to hold a Ph.D., and not just any intellectual: he had a law degree, but, before he became president, he was an American historian, with a special interest in constitutional history.

Finally, of course, Wilson was indeed a progressive; he pursued progressive policies, and nominated progressives like Louis Brandeis to the Supreme Court. Nevertheless, targeting Wilson is, to some degree not only arbitrary but also counter-intuitive; much that he wrote aligns very well with today’s far right (“America was born a Christian nation,” Wilson once said)....

At first blush, conservative attacks on Woodrow Wilson seem bizarre. For most Americans, the 28th president of the United States is a half-remembered name from the distant past, hardly the stuff of TV talk shows or blogosphere diatribes.

But Wilson’s obscurity may be precisely the reason why Glenn Beck, Jonah Goldberg and other conservatives have dusted him off and offered him up as the embodiment of the liberalism allegedly ruining the United States by dangerously expanding the federal government.

In that same batch, John Milton Cooper dutifully recognized Wilson's re-segregation but still whined that the left didn't give him enough credit.

The barrage of denunciation of Woodrow Wilson from the right, most loudly but not exclusively from Glenn Beck, is not as surprising as it seems. True, most previous excoriation of him has come from the left, from those who have deplored him for abetting an attempt to segregate the federal workplace, for taking the country into World War I, and for overseeing repression of radicals and dissenters after we entered the war.

Those earlier detractors rarely gave Wilson credit for being a true liberal and progressive, worthy of ranking alongside Franklin Roosevelt and Lyndon Johnson; he gave us the Federal Reserve, the income tax, the Federal Trade Commission, the first federal aid to farmers, a law outlawing child labor (later struck down by the Supreme Court), an eight-hour law for railway workers, and the appointment of Louis Brandeis to the Supreme Court. Anyone who did all those things certainly deserves denunciation by present-day conservatives, and Beck and comp any are belatedly recognizing Wilson's true political colors.