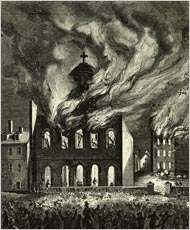 The front of the New York Times Week in Review is dominated by business columnist-reporter David Leonhardt's "The Border And The Ballot Box," his slanted essay on anti-immigration crusades then and now. The accompanying drawings give the debate the feel of a prison camp, with Americans as prison guards and potential illegals as prisoners, and the archive illustrations on the jump page include a drawing of a burning church, bearing the caption:

Another archive illustration is captioned:

Anti-Chinese -- An illustration of a massacre published in Harper's Weekly, 1885. Chinese laborers were attacked by white coal miners.

Get the hint? If you are against illegal immigration today, you are akin to "nativist," violent, racist mobs from over a century ago.

Throughout the long piece, Leonhardt blithely refers to anti-immigration movements, without bothering to clarify that what most protestors oppose is illegal immigration, not immigration per se.

On June 7 of last year, a bill to overhaul the nation's immigration system -- a bill supported by President Bush and the Democratic leaders of Congress -- died in the Senate. It died mostly because of grass-roots opposition, and its downfall appeared to serve as an announcement of the issue's new political potency. For much of 2007, immigration seemed certain to play a dominant role in the 2008 presidential campaign.

The backlash even had a familiar feel to it. In the last few decades, the country has experienced its fourth great immigration wave. Each of the other three -- in the 1850s, 1880s and early 1900s -- also caused a political reaction, the first and most famous being the rise of the Know Nothing movement. History looked as if it would repeat itself, albeit in a milder form, this year.

And so it has. It's just that the lessons of the past aren't quite what they first appeared to be.

There is, however, one more historical parallel to consider: as a political matter, immigration probably won't go away on its own. The anti-immigration movements of the past may not have created presidents, but they did change the country. The Chinese Exclusion Act helped cut the immigration rate by more than 40 percent at the close of the 19th century. The Nativist movement of the 1910s and 1920s had even more success passing laws to reduce the flow.

Unlike those earlier immigration waves, the current one includes a large number of illegal immigrants, which creates its own political dynamic. The subject also plays into the economic anxiety of today that stems from decades of slow wage growth and is now aggravated by the possibility of a recession. Perhaps most important, this immigration wave could turn out to be the biggest of them all. Last month, the Pew Research Center reported that the percentage of Americans born overseas would break a century-old record sometime before 2025, if current trends continued.

It's hard, in fact, to see how a single 2008 Republican candidate benefited from anti-immigration rhetoric. All the while, Mr. McCain's campaign bus was being followed around the early-voting states by a white van called the "Amnesty Truth Express." Outside his Florida headquarters in West Palm Beach, a few days before he won the primary that established him as the clear front-runner, the van displayed a sign reading, "McCain Equals Amnesty."

How could Mr. McCain's resurgence happen only six months after Americans deluged members of Congress with phone calls opposing an immigration bill that would have provided a path to citizenship for many people in the country illegally? And how could it happen when several states, including Arizona and Colorado, have recently implemented laws to make life harder for these immigrants? The country's previous backlashes offer something of a guide.

The Nativist reaction of the early 20th century started with a similar virulence. In the aftermath of World War I, "there was just this fear that millions of people were going to pour in," said Mae Ngai, a Columbia University historian. "You could read the discussion from the 1910s and think you were looking at something from today, if you just took out ‘Italians' and put in ‘Mexicans' "

Anti-immigrant sentiment probably did help Herbert Hoover beat Al Smith -- a Catholic, like many immigrants at the time -- in 1928. But after Congress overwhelmingly passed new immigration restrictions in 1924, the main political fight over immigration occurred not between the parties, but within the Democratic Party, with those who wanted to embrace the Ku Klux Klan battling those who did not. Franklin D. Roosevelt was in the latter group.

Mr. Rauchway, the historian, argues that the ultimate failure of anti-immigrant politics is part of a larger failure of class-based politics in the United States. Running against the rich -- or the poor -- has rarely worked in this country. Instead, immigrant-bashing has been most successful when it tapped into broader racial fears, as it did in both the 1850s and the 1920s. Notably, the economy was booming in the '20s.

"As it becomes less and less acceptable to be racist," Mr. Rauchway said, "immigration is not going to be as politically effective."

(Image courtesy of The New York Times and Bettmann/Corbis)