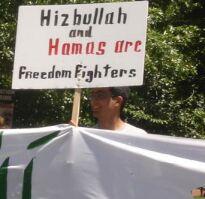 "Thousands of people rallied near the White House on Saturday to protest what they described as Israeli aggression in Lebanon and the United States' unwavering support for Israel."

It may not be his normal beat, but Pear proves he has what it takes to cover political stories for the Times -- an apparent deep need to portray any group of Muslims, whether terrorist suspects or anti-war activists, as "diverse": "The diverse crowd included many Arab-Americans and Muslims, college students and families, as well as veterans of prior demonstrations against the war in Iraq."

A fawning Washington Post article on the protest is at least more forthright about the make-up of the crowd: "The National Council of Arab Americans and the Muslim American Society Freedom Foundation also were sponsors. Most of the people at the White House yesterday were Muslim families and students, who took breaks in the shade to feed children or bow toward Mecca for noon prayers."

The Times waits until the tenth paragraph to identify the radical group ANSWER as the main sponsor of the rally, and then fails to identify the group's Communist affiliation:

"Brian Becker, national coordinator of a coalition called Act Now to Stop War and End Racism, a sponsor of the rally, asserted that President Bush had given Israel a green light to crush Hezbollah in Lebanon, then 'sent cluster bombs to the Israeli Defense Forces to kill Lebanese children.' Israel has asked the Bush administration to speed delivery of rockets armed with cluster munitions, which could be used to strike Hezbollah missile sites in Lebanon, and a senior American official said this week that the request was likely to be approved."

That's a whitewash of ANSWER, a proudly Stalinist group, as the late Michael Kelly (hat tip PostWatchBlog ) made clear back in 2003, when it was leading pro-Hussein rallies:

"It supported the butchers of Beijing after the slaughter of Tiananmen Square. It supports Saddam Hussein and his Baathist torture-state. It supports the last official Stalinist state, North Korea, in the mass starvation of its citizens. It supported Slobodan Milosevic after the massacre at Srebrenica. It supports the mullahs of Iran, and the narco-gangsters of Colombia and the bus-bombers of Hamas. "

None of that vital context makes it into Pear's story.

The two photos accompanying the print version (one of Muslims at prayer, another from San Francisco featuring unredable placards ) don't really capture the hostile spirit of the rally like the one above, courtesy of HotAir.