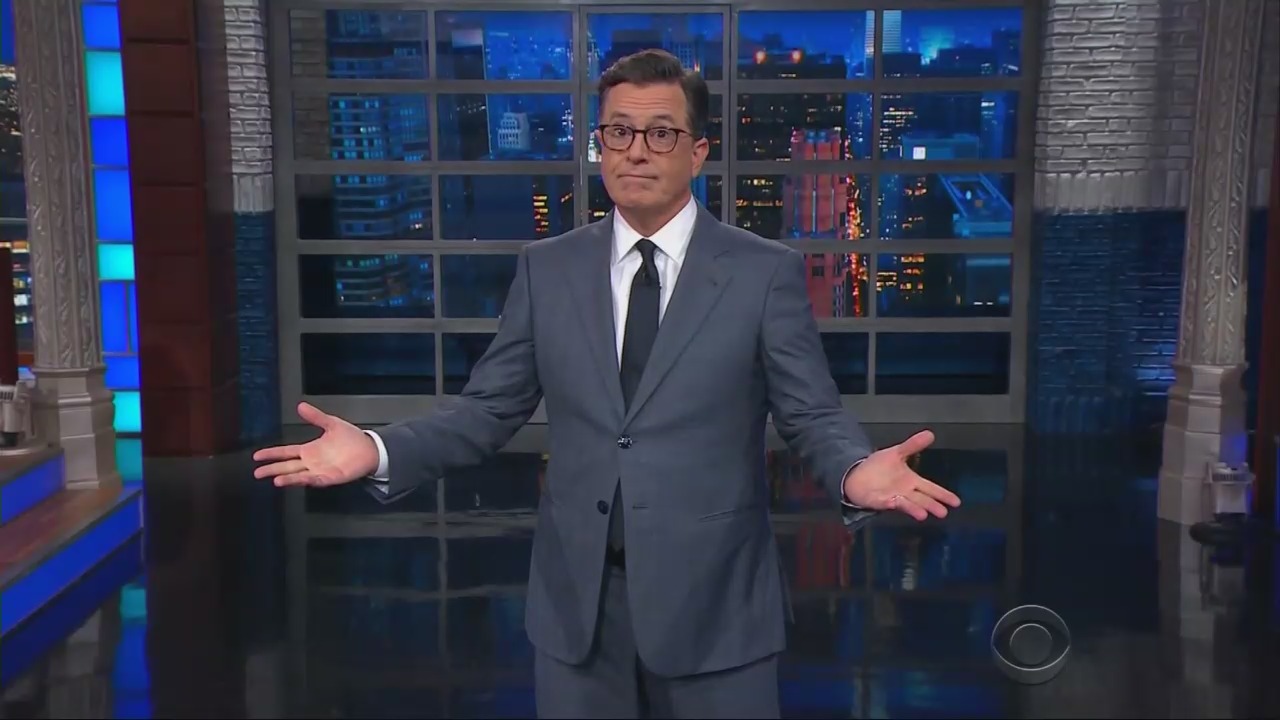 Naturally, The Late Show host had to talk about it. And, given the program’s leftist slant, Colbert didn’t find much fault in Biden’s video announcement.

The comic had another target in mind.

Colbert accepted Biden’s inaccurate video claim that President Donald Trump praised white supremacists nearly two years ago following a Charlottesville, Va. protest which left one woman dead. If you listen to the president’s full comments he made it clear he did no such thing.

All you have to do is let the audio tape roll. 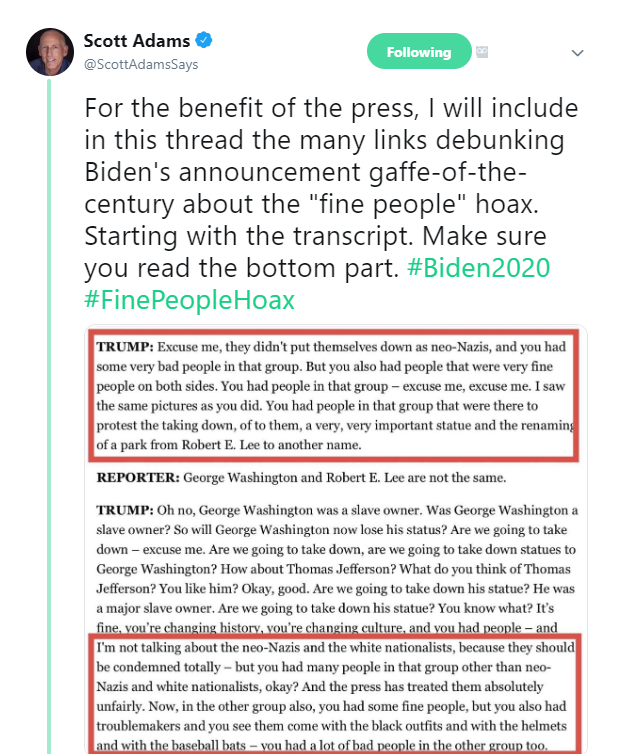 It’s the lie the media can’t stop telling. Academy voters even honored director Spike Lee for including the smear at the end of his 2018 film BlacKkKlansman. Lee earned his first Oscar for co-writing the fact-based tale.

Naturally, Biden took the bait. He knew the media which started the lie wouldn’t fact check him. Reporters stood down, right on cue.

He began, with what else, a misrepresentation of actual facts.

“Donald Trump is still president? Did anyone read the Mueller Report,” Colbert asked. Yes, that’s the report that found no collusion between Trump and Russia. Seems like an important detail, the kind that would be exonerating for any clear-eyed reader.

Even a cartoonishly biased comedian.

Then Colbert moved on to Biden’s Charlottesville attack line. He dubbed the video both “powerful” and “true,” and a potent way to put the president on the defensive.

It’s not the first time late night hosts have lied through their teeth. How many comics pounced on the alleged “pee tape?”

You could argue, “hey, how could they resist?” Just imagine if President Barack Obama were the target of that salacious, unproven rumor.

Colbert gleefully talked up the Steele Dossier “bombshell” during this “pee tape” bit, too, mocking Trump for calling it phony. That’s the same bombshell pundits now say should be thrown into the “dustbin of history.”

Two years ago, the host of Late Night with Seth Meyers puffed out his chest to savage Trump. The subject? Meals on Wheels, a program the president allegedly gutted, according to Meyers.

During the “A Closer Look” segment of Thursday’s episode of Late Night, the host bashed Trump for planning to slash a program that feeds the elderly. “How dead inside do you have to be to not want old people to get food?,” he asked. “Your heart is so small it makes your tiny hands look like catcher mitts.”

Only it proved to be more Fake News.

Did any media outlet fact check Meyers’ rant? Did the far-left host apologize on or off air?

Did they apologize after the Mueller Report showed zero collusion? Of course not. As you just read, Colbert still insists the report should remove Trump from office.

Let’s move on to Jimmy Kimmel. The far-left host of Jimmy Kimmel Live is loving his new life as a pundit. That’s partly because mostly conservative web sites fact check his wisecracks. The rest of the press outlets either regurgitate what he says or outright cheer him on.

It was a lie. Shapiro proved it, and he had company for a change.

Not to be outdone, HBO’s own far-left late night host, John Oliver, couldn’t resist taking a key piece of the Mueller Report out of context. The line in question?

The new president declaring he’s “f***ed” upon learning Mueller would be tackling the special counsel gig regarding possible collusion.

“While we obviously don’t know whether Trump will face any repercussions from this report,” Oliver said, “I’d like to just live for a little longer in the moment of him saying, ‘This is the end of my presidency. I’m f***ed.’ In fact, I’d like to take some artistic license to fully paint that scene for you: Trump, upon learning Robert Mueller was appointed, slumping back in his chair. Meanwhile, Ivanka is playing fetch with Don Jr. Eric’s tongue is stuck to a somehow frozen flagpole. Reince Priebus is walking around with his head inside a honey pot. Jared is standing motionless directly in front of a blank wall. Steve Bannon is stress-eating a bowl of used syringes. And Stephen Miller is gleefully pulling the legs off a spider . . . And right at that very moment, a pigeon flies into the room and s***s in [Trump’s] mouth.”

Let’s set aside the juvenile, laugh-free nature of Oliver’s rant. It’s based on a lie. The full context switches the meaning of Trump’s expletive around entirely.

“Everyone tells me if you get one of these independent counsels, it ruins your presidency. It takes years and years and I won’t be able to do anything. This is the worst thing that ever happened to me.”

Naturally, many reporters ran with the partial quote, just as Oliver did. A few outlets highlighted it while burying the full context. The far-left GQ magazine did just that.

Late night hosts crack wise with impunity. They serve up biased or downright fake news and never pay a single consequence. What’s to stop them from doing it all the way through the 2020 presidential campaign?

How many viewers will listen to their rants and think it’s the cold, hard truth?

The next time you read a survey saying Americans get their news from late night comics be afraid …. very afraid.