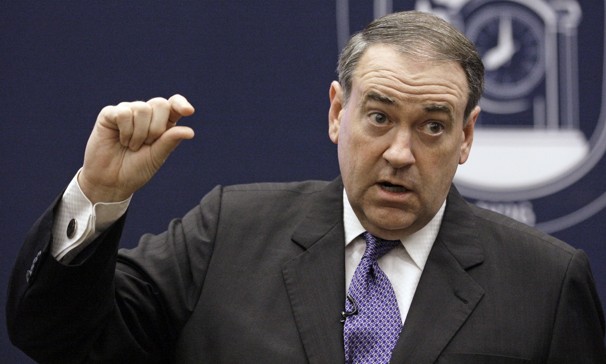 Mike Huckabee can't climb past 5 percent in the polls for the Republican presidential nomination. So the former Arkansas governor, who moved to Florida like many other carpetbaggers, is getting insanely desperate. He went full Ku Klux Klan. Last week, he compared Kim Davis — the Kentucky court clerk whose refusal to issue marriage licenses to gay people landed her in jail — to Martin Luther King Jr. During an interview on a nationally syndicated show last week, Huckabee said the Supreme Court's ruling in the 1857 Dred Scott case, which declared blacks did not have a right to be citizens, is ‘still the law of the land’....Huckabee...ignored the Constitution's 13th Amendment, abolishing slavery, and the 14th Amendment, overturning the Dred Scott case by establishing birthright citizenship.

The transcript of the radio conversation below quickly demonstrates that Huckabee never spoke in defense of slavery.

MIKE HUCKABEE: I’ve been just drilled by TV hosts over the past week-

MICHAEL MEDVED: I can imagine.

MEDVED: Well, the Dred Scott decision was overturned by the 13th Amendment.

MEDVED: Would you try to undo it [Obergefell] with a Constitutional Amendment as we did with the 13th Amendment and the Dred Scott decision?

The interview reveals that Huckabee was trying to say that the gay marriage decision is no more the “law of the land” than Dred Scott was, as both were born of judicial activism. In the process, he incorrectly claimed that Dred Scott remained intact, a mistake that was corrected by radio host Michael Medved, who observed that Dred Scott was officially revoked by the 13th Amendment.

To say that Huckabee is advocating the return of slavery with his erroneous statement is not only a stretch, it is outright dishonest.

One can only imagine how the media would react if one of their own pulled this kind of slander on Hillary Clinton or Bernie Sanders. We've just seen what happens when someone claims Obama is a Muslim.