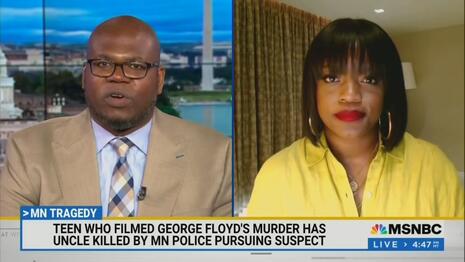 One year after the death of George Floyd, MSNBC is continuing to promote the left’s radical “defund the police” agenda. On Wednesday evening’s episode of The Beat with Ari Melber, guest host Jason Johnson and MSNBC contributor Brittany Packnett Cunningham discussed the recent death of Leneal Lamont Frazier, uncle of Darnella Frazier who recorded the death of Floyd. Frazier died due to injuries from a car accident involving a Minneapolis police officer in pursuit of a criminal. Instead of describing the event for what it is, a tragic accident, Johnson attributed it to police brutality and systemic racism against black people.

Throughout the segment, Johnson and Packnett Cunningham praised Darnella for her bravery in recording Floyd’s death and proclaimed that she was once again connected to police who “often show wanton disregard for black lives and seldom face consequences,” because her uncle was killed in a car accident.

This accident happened when a Minneapolis police officer was in pursuit of a vehicle linked to multiple robberies and collided with two vehicles at an intersection. Packnett Cunningham echoed Johnson’s and Darnella’s claim that Frazier was a victim of police violence against black people because apparently now a car accident in which a black person is killed is an act of racism and violence against black people.

Johnson and Packnett Cunningham failed to recognize that this event was just an accident and that the officer was not targeting a black individual. But of course, the liberal media would jump on the opportunity to promote the push for the abolishment of the police. Later in the segment, Johnson was straightforward with his views and ranted: “I’ve always made that abundantly clear. I believe in abolishing police, getting rid of it entirely, starting from the beginning. We’ve done that before. We’ve done it with the Department of War.”

They also made the outlandish claim that somehow this car accident was not only an intentional act of violence against black people but also specifically against someone connected to George Floyd. Johnson pushed this outrageous view:

I don’t think people understand how often this same kind of violence often visits the same families. We have a story that just came out talking about the fact that you know a young man who knew Eric Garner, later on, got pepper-sprayed by the cops. That George Floyd’s, you know, girlfriend used to teach Daunte Wright. The police seem to prey on the same black people over and over and over again.

This segment proves to what extreme the liberal media will go to promote their radical agenda and recklessly tear down the “systems that continue to perpetuate inequities in our communities.” Even if it means outlandishly attempting to attribute a car accident to systemic racism.

This segment was brought to you by Volvo and Kraft, click on the links to let them know what you think.

Below is a full transcript of the segment, click “expand” to read:

JASON JOHNSON: Tragic story in Minneapolis, Darnella Frazier, the teen who filmed George Floyd's murder, just lost her uncle, killed in an apparent accident, colliding with a police car yesterday. Minneapolis police said in a statement that an officer was pursuing the driver of a carjacked vehicle involved in multiple robberies when the officer’s car collided with another car. Darnella says her uncle, Leneal Lamont Frazier, was in that other car and completely unrelated to the chase, and he was killed. Darnella writing, quote, “Minneapolis police Killed my uncle, another black man lost his life in the hands of the police.” An investigation was launched, but this is likely to be chalked up to gross negligence on the part of the police. Is that the same as the willful public execution of George Floyd committed by former office Derek Chauvin? No. But it is another example of how American police often show wanton disregard for black lives and seldom face consequences? Yes.

On the one-year anniversary of Floyd's killing, Darnella says she's traumatized by seeing a black man murdered in front of her. Quote, “I still hold the weight and trauma of what I witnessed a year ago. It’s a little easier now, but I’m not who I used to be. A part of my childhood was taken from me.” She said it made her realize how dangerous it is to be black in America.

JOHNSON: Joining me now is the perfect person to talk about this, joining me now is Brittany Packnett Cunningham, former member of President Obama’s policing task force and an MSNBC contributor. Brittany, I just want to start with this, in case people forgot how important Darnella Frazier is to where we are today in our public discourse on this. I want to play a little video of this sort of star-studded extravaganza that was dedicated to her and what she did bravely last year to make America aware of police violence.

JOHNSON: All those thank yous won't have her sleeping any better at night. All those thank yous don't make up for her uncle being killed. I just want to start with this, what is the impact of this kind of internecine violence on black people? What is this going to do, first to this little girl and then to the community at large after already going through what we went through with George Floyd?

BRITTANY PACKNETT CUNNINGHAM: Jason, thank you, thank you, thank you for asking this question, the question that we far too often don't actually hear asked because the constant trauma, the repeated videos, the deaths, the violence. The enactment and reenactment over and over again on violence against black bodies does something to us. It sits with us, it lays down next to us when we go to sleep at night and it wakes up with us in the morning. And when you think of, yes the bravery that Darnella Frazier showed but also when you think of what it cost her to be the person who stood there in that moment and made sure that the Minneapolis police and that this entire country can no longer keep telling the same white supremacist lies. You have to recognize that there is a human being and a young woman who has paid for that dearly. She already said that she paid for that with her childhood. She paid for that with her own sense of peace and safety and black people across this country, across this world are paying that cost over and over again.

And so here is Darnella, already bearing the—that weight, already paying that cost every single day and now she once again has to make the ultimate sacrifice. Her family has now lost another loved one to the same system that has already placed Darnella, her family, our communities in grave danger and in grave disrepair. So, I thank you for asking that question because we need to start the conversation right there.

JOHNSON: And centering, centering the people who are suffering. Brittany, I want to bring up this in the background, this is really key. I don’t think people understand how often this same kind of violence often visits the same families. We have a story that just came out talking about the fact that you know a young man who knew Eric Garner, later on, got pepper-sprayed by the cops. That George Floyd’s, you know, girlfriend used to teach Daunte Wright. The police seem to prey on the same black people over and over and over again.

I’ve always made that abundantly clear. I believe in abolishing police, getting rid of it entirely, starting from the beginning. We’ve done that before. We’ve done it with the Department of War. But in this moment, that’s a conversation we can have tomorrow, in this moment, what should the country be learning from the fact that the young woman who already witnessed violence that she had no part of, just lost her uncle to the wanton violence and irresponsibility of the police? What's the lesson that the nation needs to be learning right now?

PACKNETT CUNNINGHAM: The lesson the nation needs to learn in this moment is that the system is working precisely as it was designed. That to revisit the same black families, black people, and black communities is not happenstance. It's not an accident. This is intentional. This is a choice. There are multiple systems that continue to perpetuate inequities in our communities. We look at child and family services and people who are trying to do honest work but often that work ends up disproportionately impacting black families. We look at inequitable education and poor housing, poisonous water and air. We look at jobs that don’t pay living wages, and it's often our families who are going through the revolving doors of those systems. This is not by accident. This is completely by intention. And whether it was going to be the Frazier family or someone else, we need to understand is that this system, this system that continues to visit and revisit black people with intention is working precisely and exactly as it was designed.